There IS Room At The Inn

Things are looking up on the home front. I now have a new kitchen faucet and will not be forced to leave a note for my pet sitter asking her to be careful not to touch the old faucet because it might just break in half.

Corky the plumber (not his given name) finished in a couple of hours and as he was leaving said "there's no way you would have ever been able to replace those valves by yourself" then backtracked and said he wasn't disparaging my strength but instead the state of the last of the galvanized pipes that are still in the kitchen walls. Anyhow, that made me feel better about having to pay a bunch of money for this which may have been his intention.

The dogs have a place to go for the holidays (yay!). Since my pet sitter only comes by once per day, the dogs can't stay at home and even though I started the process before Thanksgiving, my dogs were on the wait-list until this evening. If they hadn't made it off the wait-list, they would have had to come with me which would have been difficult because:
Anyhow, the dogs will once again be staying in a "luxury suite" and spending their days barking in the chorus. 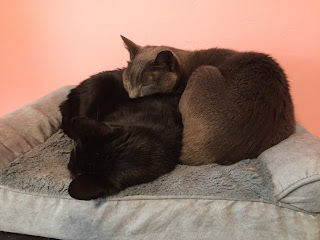 As part of my "taking this writing thing a little more seriously" plan, I'm going to set up my author website this week, possibly using Bluehost. I guess I should really make a decision about what name to use -- full name? first initial and last name? My full name is just too darn long. If you're reading this before Friday and you have Thoughts About This (or the website in general), let me know.

It's Holidailies time! Now go read some other blogs!
Posted by Theresa B (of Nebulopathy) at 7:23 PM

I have no thoughts about names but am sending encouragement on the site and your writing.