Autumn officially starts tomorrow. That should have been a clue.

This should have been my next clue: 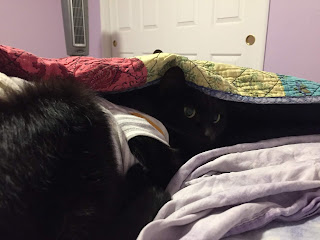 (Ripley's back in a onesie because he keeps overgrooming his shaved skin.)

But no, I made hearth bread this morning, earlier than I normally make bread since I was planning to take a loaf along to my writing group meeting at 11am. I threw everything together, kneaded it for eight minutes and left it to rise.

An hour later it was just barely bigger and that was when it really hit me. It was too cold to make bread in a hurry. (I turned the oven on for a few minutes to heat up the area and the second rise went better -- the bread was fine in the end.)

Anyhow, even though it's currently nearly 10 pm and it's still in the 70s, winter is on its way.
Posted by Theresa B (of Nebulopathy) at 9:51 PM No comments:

I got some excellent news today. Turns out Ripley's lung mass was not a tumor, but an abscess, probably caused by something he inhaled, like a foxtail. That was my secret hope when the initial aspirate came back with just a bunch of necrotic cells, but it still seemed very unlikely given that he's 14 years old.

The other good news is that he's been doing really well -- his energy level is good, he's been eating well, and he's even been pooping normally (TMI?). He follows me around the house while I'm doing things and comes to the door to greet me when I come home -- all normal Ripley behavior 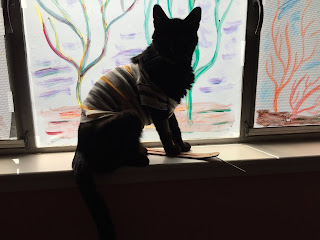 Now I just need to figure out how to keep him from inhaling anything else...
Posted by Theresa B (of Nebulopathy) at 7:21 PM 2 comments:

The lung tumor has been removed and I have all my fingers tightly crossed that Ripley heals and we can then start him on something for his GI disease. (Steroids inhibit healing, which is why surgery had to happen first if it was going to happen at all.)

Surgery was Wednesday, he came home Friday afternoon and seemed to be doing really well until today. I'm more than a little worried that he was worse today than yesterday, but he did eat some today and he had enough energy to blast off the couch when I tried to medicate him this evening, so... again, fingers crossed.

In the meantime, here are some pictures of Ripley in his new career as supermodel. He's rocking the post-surgery onesies. 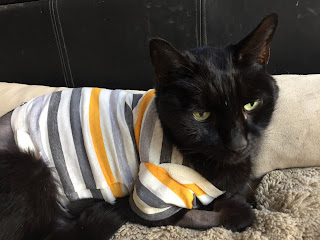 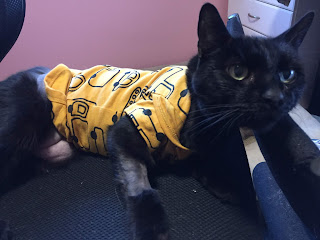 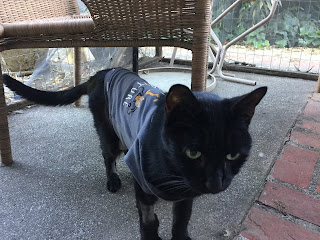