The first person of the current mini-Exodus had his last day on the project today, so we all went out to lunch together. As going away lunches go, this one wasn't too bad -- the restaurant was so loud that I couldn't hear the person across the table, but at least that precluded any good-bye speeches.

We ended up at the Panera that just opened up near work. I'm sure it will do well -- it has nothing spicy on the menu and everything can be eaten without really chewing, so the blue hair crowd will take over. I had the bread and cheese calorie bomb. (No, that doesn't really narrow it down since everything on the menu has bread and cheese and is at least 800 calories.)

It's a far cry from the old days when we had at least ten Indian contractors working on the original project. The company that imported the labor made the visas for either one or (optionally) two years, so it seemed like there was almost always somebody leaving. Since many people didn't drive to work, we usually ended up at the one restaurant with a lunch buffet within walking distance. The sign out front said "Spring Garden" but among our circles it was known as "Good-Bye Garden". Eventually the company stopped hiring people from that intermediary and Spring Garden went out of business.

Only two more group lunches to get through in the next few weeks...
Posted by Theresa B (of Nebulopathy) at 10:33 PM No comments:

You say tomato, I say that ain't coming off of there

I often wonder "What is the Internet really good for?" (besides stalking your exes, reading celebrity gossip blogs, reading non-celebrity blogs, watching things on hulu.com, finding out which political candidates think God talks to them (and since when is hearing voices in your head not a sign of a mental disorder?), and ordering feral cat traps on-line).

The answer to this is clearly: recipes. Whereas before you had to page through multiple expensive cookbooks to find a recipe that looks great in the picture but turns out to taste terrible, now you can accomplish that much more easily. And it's free (aside from the $72 you spend on the spices that you'll never use again).

This week I had extra tomatoes in my CSA box. I'm not a big fan of anything but cherry tomatoes, and the beefsteak tomatoes that I had in my box were so ripe that they wouldn't even make the trip to work. But we've established that the one thing I have in abundance is sun. So I decided to make sun-dried tomatoes.

As with most new things that I try, I can't really blame my problems on anyone but me. It clearly says that Roma tomatoes are the best choice, and that the tomatoes shouldn't be overly-ripe, and that if you use something other than a Roma, you should probably remove the seeds. I ignored all of this advice, because really, are you going to believe everything you read on the Internet?

So I sliced tomato wedges, threw them on a cookie sheet with some salt, covered the whole thing in cheesecloth, put it outside on the patio, and forgot about it for four days.

The good news is that I have sun-dried tomatoes.

The bad news is that these suckers were welded to the pan. In fact, I had to soak the pan to get them off, which sort of negates the whole drying process. But the one piece that I pried off with a knife tasted like a sun-dried tomato.

So... next time I'll fail differently. That's all you can really ask for.
Posted by Theresa B (of Nebulopathy) at 10:01 PM No comments:

We hit triple digits this week here in beautiful Woodland, which is pretty standard for this time of year. The tomatoes are loving it, the dogs not so much.

I haven't turned on the A/C yet, mostly because I hate trying to close the house up that much, and also because it seems easier to just acclimate to the heat than to keep going back and forth between cold and hot. So far so good, but I certainly reserve the right to change my mind about this.

While working at home, I'm pretty much stuck in the hottest part of the house, so I've been trying a variety of techniques to stay cool:

I also try not to use the oven, which sounds obvious, but one of the perks of being at home is being able to cook or bake something for lunch. I finally got smart and moved the toaster oven outside on the patio with an extension cord. That worked pretty well, but I'm toying with the idea of building a solar oven. If nothing else, it ought to be interesting.
Posted by Theresa B (of Nebulopathy) at 10:35 PM No comments:

First off, here is my apple tree. It has more apples than leaves, and the whole thing is only about three feet tall. It's a pretty pathetic excuse for a tree at this point, but it's trying hard to produce as much fruit as possible. 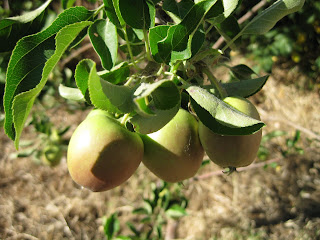 The winds kicked up a couple of nights ago, and I found this about ten feet away. 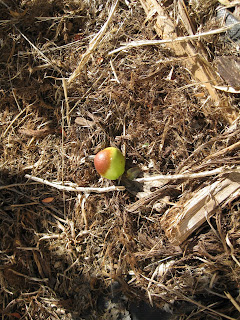 Sometimes the apples really do fall far from the tree.

Finally, never let it be said that there isn't much to be learned from the newspaper:

I'm not really sure what a "pimp bomb" is, but I have to imagine purple crushed velvet, tassels, and a fancy cane must be involved somehow...
Posted by Theresa B (of Nebulopathy) at 11:11 PM No comments:

There's No Good In Bye

It's true, I missed my regularly scheduled Thursday posting, but JoJo the Enforcer sent me a picture of her new kid still covered in baby goo, and I had the vapors for three days. Or possibly I just didn't get home on Thursday until after midnight. Take your pick.

Anyhow, in the last couple of days it has suddenly decided to be summer and all of the kids got out of school. Normally my only contact with the school kids is tangential -- they drop homework on the street, and I laugh at their spelling, grammar, and content when I pick it up along with all of the other trash that gets stuck on my lawn.

Apparently the end of the school year brings out the best in everyone, or not... This weekend I found an unsigned letter. I'm guessing it was written by a girl based on the large, rounded printing. Also, I've never heard of a guy born after Lord Byron who expressed his feelings in writing. Of course, if all of the conversations I am subjected to on a daily basis about video games were transcribed, that would be a different thing. I continue to be amazed how deeply some people's feelings run over video games. In fact, I feel that I spend more time listening to people describe video games than they could possibly spend actually playing video games, but I know that isn't true.

But back to the point -- in true English honors format, the letter begins with a thesis statement, namely "I am mad at you for two reasons, one you already know, and I know the other isn't my buisness (sic), but still."

Such a maddening lack of detail. Come on, kid, if you're going to commit anything at all to writing, you might as well tell us what's going on even if it isn't your business. Or mine, for that matter.

It continues: "I just hate it how your (sic) all up on Sara and you guys aren't even going out, and that just shows me what kind of person you are, or have become, & I don't like it & I don't care if you don't like it & you don't want to be friends with me."

I have to admit, I'm not sure exactly what "all up on" someone really entails. Is this "hooking up"? I'd like to believe (based on handwriting analysis) that the writer is in grade school, but this is the point when I throw my hands in the air and say something about these kids today. Certainly Sara's morals are being impugned in any case. (There you go, Jeff and Rvan, there's your SAT word of the day.)

Finally, the letter wraps up in all of its run-on sentence glory "Fine just know that whatever your (sic) doing I think is wrong. Bye."

It doesn't get any better than that.
Posted by Theresa B (of Nebulopathy) at 10:22 PM 2 comments:

A Fistful of Change

Well, here we go -- it's been a week of huge changes for me and my sisters this week.

JoJo the Enforcer had a baby girl (or, as her now-middle child said after being told that the reason his mother wasn't there was that she had gone to the hospital to give birth, "Mommy went to the hospital so the doctor could take the baby out." -- sounds much simpler that way, doesn't it?) As far as I know the baby doesn't have an official name yet. I'm guessing it will be something other than "Poquito Tito", but who knows? Anyhow, apparently everything went as well as those sorts of things can go. I haven't seen any pictures yet, but I'm sure the baby looks just about like all newly born babies look. (Again, I haven't seen any pictures. This is purely me projecting based on every single other newborn human I've ever seen. They're hideous. Admit it. Kittens are much cuter.)

In other news, K-poo is switching jobs. While I'll miss the stories about her insane boss whose wife has been bankrolling the company for years, it will be nice for her to feel like she's not having to switch canoes in mid-stream every week. And possibly she'll move someplace that doesn't require her to store all of her belongings in an area smaller than my kitchen cabinet. (However, it really should be about the easiest move possible even without an elevator. We could probably just load everything into one box and toss it off the edge of the roof down to a car below.)

And finally, in really important news, I finally put the face plates back on the electrical socket and light switch in the bathroom that I painted a year ago. Also, half of the towel racks are back up. At this rate, I should be done sometime in 2015. Never let it be said that my life isn't exciting...
Posted by Theresa B (of Nebulopathy) at 10:06 PM 6 comments: