Overnight emergency shifts are a whole different world from daytime practice. For some reason, nothing becomes serious until the sun goes down, and then it's a matter of life and death, even if it's just that the dog is scratching at his ear.

Most of the time the owner would list what the dog had gotten into as the reason for coming in, and if that didn't work, going into the room to talk to the owner while wearing a white lab coat and a worried expression did the trick. The worst cases were the owners that wouldn't admit to the possibility -- then you might be stuck with a sudden behavior change as the only symptom. That can mean anything from a brain tumor to a liver shunt to just a dog doing weird things for no reason.

I once had three people come in with a fluffy four month old puppy at 2 AM on Monday morning. Their story was that they were playing with the puppy when all of the sudden it started barking and running around in circles and wouldn't stop. They swore up and down that there was no possibility of anything the dog might have gotten into anything. I even offered the standard out "Any possibility that your roommate might have had something?". All three said no. Of course, two of the three kept going off on tangents and had hard time staying focused on what I was asking. I could only hope that the third was the driver.

The physical exam was unremarkable -- the puppy was barking and a little hyperactive, but had a heart rate within normal limits and seemed to be responding to me fairly normally.

So... young stable dog, chemically altered owners (with no money, but with the grandmother's credit card). I ran some bloodwork (boringly normal) and kept the dog overnight on a fairly high fluid rate, hoping to help flush out whatever it had gotten into. Within two hours the dog had calmed down and it ate normally and slept the rest of the night.

I transferred the dog to Daters in the morning, then had to listen while one of the internal medicine faculty (who had a history of making snap diagnoses and complaining that the overnight doctor hadn't run enough tests) complained that I hadn't done enough tests overnight and that it certainly wasn't a drug ingestion and ... I left before he had finished so that I could go home and get my precious six hours of sleep before I had to be back again.

Funny followup #1: When I stumbled back in that evening, Daters said "Those people were totally on drugs." When he called the owner to update her about her dog, the woman fell asleep on the phone while he was talking. After going through this a few times, Daters ended up calling the grandmother (who was getting billed for all this) who told him "Those girls are worthless."

Funny followup #2: The clients wrote a letter of complaint about how rude Daters was. The only problem was, they complained about the ophthalmologist (whose name was nothing close to Daters), who had no idea who the clients were.

Exhibit B: Despite the fact that I was going (quite) a bit faster than the posted speed limit, it still took an extra ten minutes to get to work. (Related item 1: the speed limit only really counts when the radar detector starts having seizures on the dashboard.)

Exhibit C: Somehow it turns out that today is Thursday and thus blog-posting day. How is this possible?

I'm going to bed now. If this turns out to be some spell by an evil witch who's annoyed because she wasn't invited to my christening, keep those necrophiliac princes the hell away from me.
Posted by Theresa B (of Nebulopathy) at 11:07 PM 9 comments:

Reason #546 Why I Would Be a Terrible Parent

I woke up this morning and found out that the cat-food restocking leprechauns had not visited while I was sleeping. Not only did we not have any of the usual Friskies (which I feed twice a day just to make sure everyone is eating), we didn't have any cans of the special diet Princess Crow is supposed to be getting, or tuna leftover from when K-poo stayed here, or even the weirdly gelatinous non-allergenic z/d from the cat who died over a year ago.

So I opened up a bag of cat treats (expiration date 12/08), dumped some on a plate, and went on with my day.

This is roughly the equivalent of running out of milk and then pouring Diet Coke on your child's Cap'n Crunch before sending them off to school in the morning.

And it's definitely worse than feeding your little sisters brownies and bagels in the morning.

Whatever.
Posted by Theresa B (of Nebulopathy) at 10:10 PM 9 comments:

Although many people agree that George Thorogood sang a kick-ass song about drinking, few people have publicly recognized the wisdom within. I'm not advocating full-blown alcoholism to the point of making your liver beg for mercy, but there are some reasons to drink alone:

1) No possibility of a DUI. And no need to designate a driver. In fact, if you fall off your chair, you can stay on the floor without any interference until you feel like getting up.

2) Nobody will be trying to put food coloring in your drink. Grow up people -- it's beer, not Play-doh.

3) You'll never hit on a gorgeous person while drunk only to find out they're hideous in the morning. Or if you do, you're already married to them and it's not going to matter.

4) Clean bathrooms. Think about it -- when you drink at most bars you've had a diuretic that also impairs judgment, and you still don't want to use the bathroom.

5) No need to worry about getting drunk and telling someone what you really think of them (unless you're a drunk-dialer, in which case I can't help you).

So there, six solid reasons to support the Home Intemperance Union. Join us, won't you?
Posted by Theresa B (of Nebulopathy) at 9:30 PM 2 comments:

So we were at lunch today at the pizza place which keeps expanding even though it would have gone out of business long ago if life was fair. It's too loud for conversations, the service is just sort of okay, it's a little expensive, and the food just isn't that good. (And yet, I was eating there for lunch, supporting the place...) Anyhow, the back room had a large party and multiple people showed up with store-packaged cut flowers, so we started listing the ways that flowers were a metaphor for life:

- You grow for a while, then someone comes along and chops you off at the roots.
- Just when you start to blossom, you're killed.
- After that, you just start to stink.


Then I came home tonight and realized that the daffodils in the front yard are blooming. My friend Charlotte stealth-planted them four years ago for my birthday. I haven't done anything to take care of the bulbs, and they look better every year.

There just might be a metaphor in the daffodils, too.
Posted by Theresa B (of Nebulopathy) at 11:08 PM 2 comments: 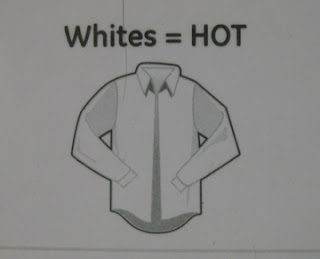 So I had this whole post written about how I was blaming the cat pee smell on Scooter and it turns out that Crow has a urinary tract infection and bladder stones, and then Word crashed and the post was gone without a trace.

Apparently my computer is trying to protect the world from yet another middle-aged woman blogging about her cats. 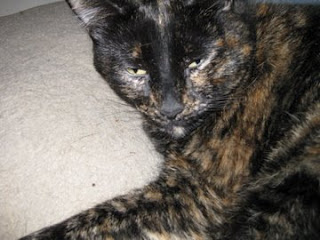 (Crow is not amused.)
Posted by Theresa B (of Nebulopathy) at 7:07 PM No comments:

Postcards from the Fridge

My refrigerator has been a tad unreliable lately (e.g., a ten pound bag of ice cubes melted in the freezer over two days, then froze again in a lake on the bottom, milk goes bad before the expiration date, etc.) and in an effort to avoid having to call in an expert, I looked at the information online.

It turns out that you're supposed to vacuum the coils or change the muffler bearings or something like that every year, or every six months if you have a pet with long hair. It didn't mention the maintenance schedule for households with a grand menagerie, but I think it's safe to say that it's about seven years overdue. (Actually, I think a sensor is broken since it didn't even try to chill for two days, but whatever, I'll try anything.)

So I pulled the refrigerator out to clean the coils on the back and found... well, nothing, since the coils apparently aren't on the back. I did find a little grate on the front which revealed: 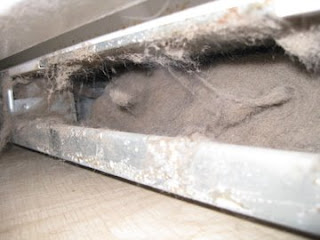 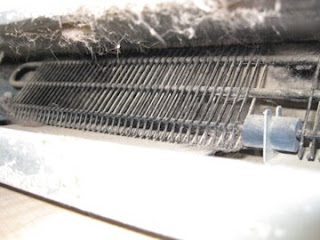 I'm sure that won't solve the problem and I'll eventually have to call someone.

However, in pulling the fridge forward I found about 50 pieces of cat kibble, a bunch of dust, and a postcard that Rvan sent me from Hawaii in 2003. If I remember correctly, he was there for Benson and Kisha's wedding. (Benson has done many notable things, but I'll always remember him as the only person I've ever heard of who was named after his father's favorite cigarette brand...) 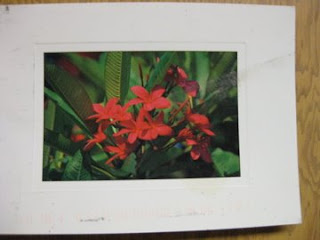 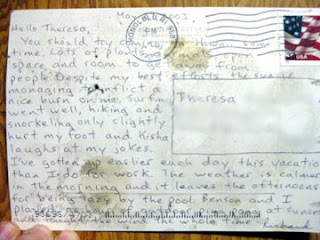 In case you can't read that, it says

"Hello Theresa, You should try coming to Hawaii some time. Lots of plants, animals, open space and room to get away from people. Despite my best efforts the sun is managing to inflict a nice burn on me. Surfing went well, hiking and snorkeling only slightly hurt my foot and Kisha laughs at my jokes. I've gotten up earlier each day this vacation than I do for work. The weather is calmer in the morning and it leaves the afternoons for being lazy by the pool. Benson and I played an hour of outdoor ping pong at sunset and fought the wind the whole time."

Points to take away from this postcard:
1) Rvan knows my misanthropic tendancies and proves that by pointing out that I would enjoy the place merely because I wouldn't have to be around anyone.
2) He still hasn't changed -- what's a little pain when you're on vacation?
3) Someone laughing at his jokes is still a notable event.
Posted by Theresa B (of Nebulopathy) at 8:39 PM 3 comments: