Pick a Line, Any Line

There's a section on the freeway near work where they are doing... something (and really, at this point I don't even wonder what's going on any more), and apparently they needed more room at a few spots in the median.

So they took something that looked like this (fourth lane not shown): 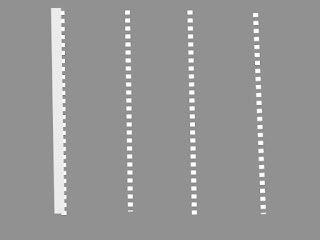 And then they scraped the pavement to get rid of the paint in the section they wanted to change, which really means they made lane lines that are 1/4" into the asphalt instead of white paint sitting on top. 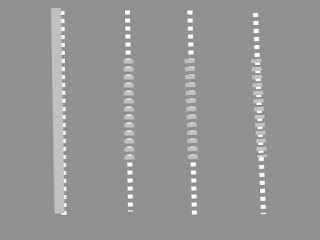 And then they painted the new lines, so you're driving forward and it looks about like this: 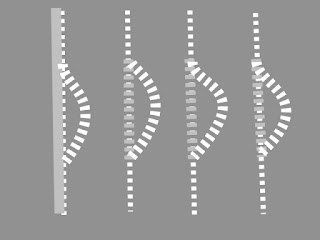 This is all happening at about 70 mph.

Some people notice the painted lines, other people go with the scraped-off asphalt as a guide, and a significant number of people just split the difference. It's a bit like watching bumper cars except I have yet to witness an actual accident here.

These are the days I wish my car was a lot smaller.
Posted by Theresa B (of Nebulopathy) at 6:56 PM 2 comments:

My new laptop showed up this week, so now I'm switching from the so-old-IT-won't-even-support-it HP Windows (ptui!) laptop to a brand new MacBook Pro. Aside from the crapware that the company loaded on the new laptop, it works great.

I work in three locations. With the ancient HP, I had three identical docking stations. In fact, I had three docking stations and a file cabinet full of backups in case one broke because I'm one of the last people who is still using that laptop. I have seven monitors spread out among those three locations, but all I have to do is dock the old laptop and everything magically works.

I have one docking station for the MacBook. So... right there you can see there might be a bit of a problem. Still, I was in the main office on Monday and I had the docking station and I had a drawer full of monitor cables and I thought for sure I'd be able to hook everything together without too much trouble.

Reader, I was naive.

The laptop connections:
The monitors:
Cables I had:
So then we opened the other big box 'o cables under my boss' desk and dragged out a few more. We eventually found a DisplayPort-HDMI cable that they used back when the Super Bowl was in town. Granted it was twelve feet long and I could have hooked it up to any of six computers in the area, but at that point I didn't really care. I'd at least be able to get one of the monitors connected.

It didn't work. I have since googled and it turns out it is a unidirectional DisplayPort to HDMI adapter which was exactly the opposite direction of what I needed. There's apparently some technical reason that those adapters are unidirectional and can't be made in the other direction and I'd probably understand it if I hadn't slept through my original degree, but I have accepted the bottom line which is that it doesn't work because *reasons*.

And people wonder why I start laughing when movies show hackers breaking into alien computers in fifteen minutes...
Posted by Theresa B (of Nebulopathy) at 7:59 PM 2 comments:

Well, 2019 still has that new car smell, and we haven't dented the fenders yet, so I guess this is the time I'm supposed to write resolutions. Except I don't really do resolutions. I occasionally have goals, and even then I tend to go shorter term (ie, the writing goals of the month which I keep on the other blog and we aren't going to mention my failing grade for December because now it's January, yay!).

I guess the closest I'll come is listing habits I'd like to acquire or reinforce. That doesn't seem so scary or a path to failure. Here are all the ones I could think of:
I mean really, that's about it.  I don't have any non-writing grand goals for the future. Maybe get rid of my car? Win the lottery and quit my job? I can't really control that last one although I'd have to start playing the lottery first.

The timer just went off for my fresh vegetables habit (autumn pot pie) and I even mostly followed the recipe (or at least as much as I ever do). 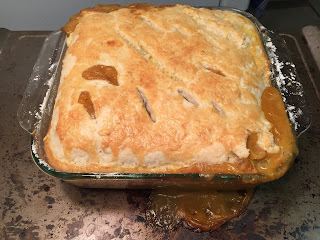 Happy New Year!
Posted by Theresa B (of Nebulopathy) at 6:21 PM 2 comments: