The house has been lacking a big dog for the past few years, so I rectified that this week. Meet Georgie: 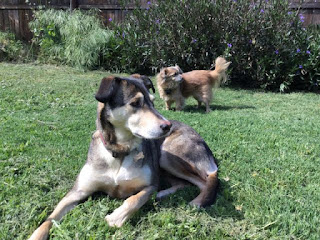 He's a lovely five year old mumble-mumble-something-Shepherd mix who was looking for a place to live.

I took Ginger over to meet him at his foster home last Sunday,  and Ginger was pretty terrible but Georgie was good, and since I couldn't just swap dogs I brought Ginger back with me and adopted Georgie two days later. Better yet, he was 50% off. Such a bargain!

After a short detour to the Sheriff's Detention Center (Me: "Why do they have razor wire around the Solano County Shelter?"), I signed his papers and then picked him up.

The household has been adjusting pretty well. Georgie's about four times the size of Ginger. She can walk under him without ducking. This has led to a slight problem when they both run to sniff the same thing (which happens constantly on walks). They sniff, Georgie moves forward, lifts his leg, and pees on Ginger's head. Not ever having had a boy dog, I hadn't realized this would be a problem. Luckily Ginger is starting to back up when Georgie lifts his leg, so I think this phase is almost over.

Georgie also eats 4x the food and poops 4x the amount. Let's just say the yard will be kept short from now on.

Most importantly, Georgie is polite to the cats, even when they do things like this: 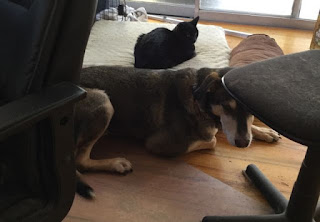 Yes, that's Ripley plopped in the middle of the one bed that Georgie sits on. He lay on the floor next to the bed for almost an hour. Eventually Ripley gave up and wandered off and Georgie got his bed back. 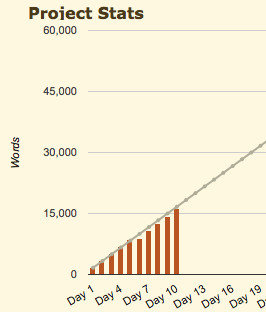 While I Was Sleeping...

This is just one of those week in review type posts. Mostly because it was sort of an odd week...

First off, the bathroom remodel is officially done. That means I have two complete functioning bathrooms! Woohoo! I celebrated by not getting up at 5-damn-thirty-in-the-morning over the weekend. Anyhow, it looks nice.

The next item is that I got a short story rejection at 3:05 am. I guess I should care more about the fact that it was rejected, but eh... seen one, seen dozens of them. (No really, I have.) It honestly doesn't bother me anymore. If something ever gets accepted I'll probably stroke out on the spot, so rejections could be seen as a good thing. But 3am? Now I feel bad that someone is going through the slush pile at 3am. Slush pile reader whoever you are, go get some sleep!

I stopped in at the corner market and bought some cookie dough and didn't look at the expiration date until I got home. December of last year. Yes, of course I ate it anyway. Can something with that much sugar go bad? I did, however, bake the dough first, just like it commands on the package. But seriously... isn't there any law about selling completely outdated food items? And more importantly, why do I ever go there?

And finally, Camp NaNo started on April 1st, so I'm once again writing 1,667 words per day. Some of those words are golden. Probably about ten of them, and not necessarily in the order I've put them, but still... golden! I'll try to come up with the elevator pitch for this book by next week's blog. Here is the progress as of this evening: 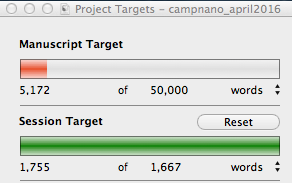