Here are some questions that should be on the California driver's license exam:

1. If you are traveling on a busy four-lane freeway and it begins to sprinkle, you should
a) Slam on your brakes to avoid hitting any raindrops.
b) Continue at the same speed, but allow a little extra room between your car and the one in front.
c) It doesn't really matter because the car in front of you will slam on their brakes, so you have to as well.

2. If it has been raining for a while and now traffic is moving at a steady 40 mph and there is a flash of lightning in the distance, you should
a) Slam on your brakes to avoid hitting the thunder that will be coming.
b) Continue at the same speed because the lightning has already struck five miles away and that shouldn't affect traffic.
c) It doesn't really matter because the car in front of you will slam on their brakes, so you have to as well.

3. If it is raining steadily and you are driving in the number one (fast) lane at 40 mph and it starts to hail, you should
a) Remain in the lane and stop your car completely then turn on the emergency flashers. (Yes, this was the answer from the driver in front of me this afternoon...)
b) Slam on your brakes as a preemptive strike because you know that someone else will if you don't.
c) Turn up the radio because hail striking a car is very loud.


It turns out that it doesn't take more than a few people to panic during a thunderstorm to really mess up traffic, but I still made it to the NorCal family dinner. There we discussed such important topics as:

When I put it that way, we sound like a bunch of old white people...
Posted by Theresa B (of Nebulopathy) at 11:01 PM No comments: Links to this post

Water Under The Bridge


Back in the Good Old Days™ I worked on a project that had grown "organically", which is another way of saying that a bazillion cheap programmers had worked on it and the code was full of crap. (For the record, the only other possibility is that the code is rewritten, and then it's crappy code written by fewer people. There is no non-crappy code.)

Anyhow, this particular project had a lot of spatial analysis, and one of the important things was where sites were on the earth. We had libraries full of homegrown functions to do things like come up with the distance between two points on the earth, or determine whether you could see one point from another point if you knew the elevation information for that area.

The main problem was that every time a new person added another function to calculate something, they appeared to have also added yet another structure to specify a point on the earth. All of the structures contained the same information (latitude and longitude), but in order to take the output of one function and use it in another one, you had to convert the first structure into the correct structure for the next function. So not only did we have libraries to do all of the spatial analysis, we had a lot of code to convert all of the different structures (all 14 of them) back and forth. As any programmer knows, this is a great way to add all sorts of random and interesting problems. 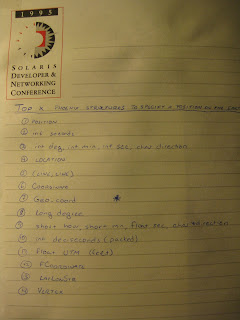 It stayed this way for a long time because fixing it would require a lot of work and we all had other things to do, but finally Rvan and I decided to attack the problem and just change everything. So we did.

Or, at least, I did. Rvan got sidetracked a few days into the conversion and decided to leave this inspirational note on my desk: 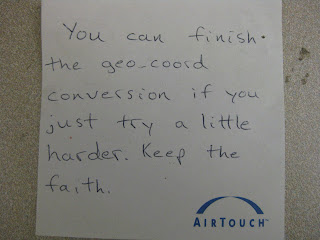 I know you're supposed to forgive and forget and all, and I've more or less forgiven him for this, but forget? Yeah right...


On a different note, I'd like to believe that people walking by my house see things like this 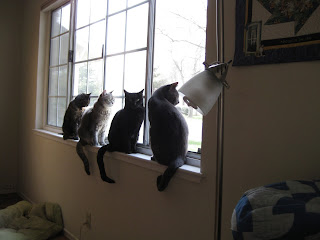 and that's why everyone stares. I'll keep believing that until someone proves otherwise.
Posted by Theresa B (of Nebulopathy) at 11:33 PM No comments: Links to this post

Get Out the Vote

This week I'm going to be more disciplined. I swear. Really. Dammit.

Anyhow, I was thinking about my list of fun / non-essential projects and I think it's time to do at least one of them. So here's the current list:


So... anybody have a preference? Suggestions? Ideas?

Pretend there is a polling option here and make your voice heard!
Posted by Theresa B (of Nebulopathy) at 10:47 PM 1 comment: Links to this post

I took a few days off my writing (fiction and code) schedule last week to work on the yard. Hey, the weather is beautiful and besides, if I get the weeds under control now, I may not have to take the dogs in on emergency because one of them snorted up a foxtail.

Molly (the bigger dog) spent the days doing her impression of a speed bump, usually right in the area I was trying to weed. There's still a large-dog-shaped clump of weeds near the garden where I just went around her.

Ginger (the alarm system) divided her time between rolling in whatever she could find and barking at people walking by, and then when she was tired of being outside, she would run over to where I was working to lick my face.

Other than the fact that I'll probably die of Sporotrichosis in a few weeks because I kept impaling myself on the mutant rose bush that is crawling across the yard, I enjoyed myself.

Still not ready to go back to work in case you were wondering...
Posted by Theresa B (of Nebulopathy) at 10:46 PM No comments: Links to this post

How CPR Works: A PSA For Hollywood

A few days ago I watched the pilot episode of "CSI:Miami" because I figured that a show that stayed on the air that long must have had a good first season. Wow, was I ever wrong. I'm not even sure how that crap-fest even made it to the second episode.

Anyhow, amidst all the completely illogical things that happened in the first ten minutes (eg, the scene of an air crash being investigated by the local CSI crew because the NTSB was going to take a few hours to get there, an investigator wandering around collecting evidence in the Everglades in three inch heels, autopsies being done out in the field, etc.) there was this memorable scene:

CSI guy: "We found one with a pulse!"
Then he yells "Stay with us!" and starts chest compressions (sort of) on the plane crash victim while everyone else stands around and watches him.


This isn't the first time that I've seen this sort of thing, and it occurs to me that maybe the writers in Hollywood are a bit unclear on the concept of CPR, both when it should be used and how it should be done.

Normally it doesn't bother me (that much...) that medical things in shows are often really, really wrong, and the fact that, say, people I know actually believe that blood in your veins is blue and magically turns red when exposed to air... yeah, it makes me laugh, but isn't going to ever do anything but embarrass someone. But CPR is the one thing that the average person on the street may actually be asked to do someday, and therefore it's the one thing that it would really pay for television shows to get right.

So... here's my attempt to clear things up, just in case anyone ever wants to try to get it right:

1) A pulse is a sign that the heart is beating pretty effectively on its own.

2) The point of chest compressions is to pump blood through the body when the heart isn't beating.

3) Ergo (hah, those four years of Latin in high school are really paying off!), if a person has a pulse, they don't need chest compressions.

5) Evolution pretty much went out of its way to keep external forces from compressing the chest, because in normal times having your chest collapse is a really bad thing. There's a reason you have a rib cage.

6) Because of this, compressing an adult's chest enough to squish the heart (which, remember, is what you're trying to do) is hard. Think of it like putting a small water balloon in a shoe box. Tapping on the lid of the box isn't going to do anything. You're going to need to pretty much crush the box. To bring the metaphor back, effective chest compressions need to push the sternum down by a few inches. That will break ribs. If you aren't compressing the chest enough to break ribs, you aren't doing anything useful.

7) You don't have the strength to do this in just your arms -- not even Ax did when he was in his prime. (Not that he's not in his prime now.) You'll need the weight of your body behind the effort, so lock your elbows and use everything in your upper body to push down. You're aiming for a rate of 120 beats per minute, which is about the beat of "Staying Alive" by the BeeGees. I'm sorry I got that song stuck in your head. (No I'm not.)

8) Try that a few times. I'll wait. (Doo do do...) Yeah, it's really hard work, isn't it? Unless you are insanely fit, you're going to be exhausted within a minute or two. Be prepared to hand off the chest compressions to someone else pretty quickly. (Paramedics have a cool machine that will do compressions automatically for just this reason.) (TV people: As an added bonus, this gives all of the actors in the group something to do in this scene. Everyone will be happy!)

9) Don't stop until someone tells you to stop. Or if, you know, you realize the body is in rigor, or has settled to room temperature...

To recap, the wrong way to do CPR is to have ten healthy adults watch one person spend twenty seconds patting the sternum of a victim that already has a pulse and then consoling them because they tried.

On the other hand, for people who drop dead outside of a hospital, the chances of CPR having a good outcome (ie, the person leaves the hospital with a functioning brain) are terrible. I think the number is somewhere around 3%, and that probably includes people that code in the ambulance on the way to the ER.

So don't feel too bad when it doesn't work. After all, as my emergency medicine instructors always said, it's hard to make something alive after it's dead if you can't keep it from being dead in the first place.

And that's the end of our PSA.

Here's a funnier version of the above from the British Heart Foundation:

http://youtu.be/ILxjxfB4zNk
Posted by Theresa B (of Nebulopathy) at 11:09 PM 2 comments: Links to this post