One of the important things that you learn when you study probability theory is that if something is truly random, you will get clusters of events. I'm trying to believe that's the cause for the three "drop everything, oh my god, this is totally wrong" reports that I received in two days that turned out to be not only user error, but user error that makes me find it hard to believe that these people can actually tie their shoes in the morning. The other possibility is that our users actually are getting dumber and I can't contemplate that thought for long.

Imagine that you get an email with the subject of "URGENT!!!: kittens no longer waking up since the last release, must fix IMMEDIATELY" and when you finally wade through the bug tracking system to find the attached screen snapshots, the "before" picture shows five kittens playing, and the "after" picture shows an alligator basking. With a date stamp on the picture that shows it was taken five years ago.

Anyhow, after the third such email on Friday, I sent Rvan mail indicating that our users were idiots. I also included some profanity, but in a completely professional way (ie, I abbreviated it all). Then I said I was going to take a nap, which I did.

The good news is that Rvan is pure of thought and deed because he didn't immediately understand my abbreviated profanity. The bad news is that he is tenacious, so he spent the time to figure it out.

Anyhow, I'm hoping that the stupidity cluster has passed us by again. If only I'd learned something in my stochastic processes class, I might be able to figure out if I should just stay home for another week...
Posted by Theresa B (of Nebulopathy) at 9:57 PM No comments:

We All Belong Somewhere

In place of the regular Thursday post, I offer this conversation between my brother and his soon-to-be seven year-old son which deserves to be immortalized:

Son: Dad, can I join the boy scouts?

Jeff: Sure. But I thought you didn't want to.

Son: Oh yeah, right. How about the girl scouts?

Jeff: [pause] Um, sure. We might have to ask about that.

Son: Oh, never mind.
Posted by Theresa B (of Nebulopathy) at 8:27 PM No comments:

The dogs went to the groomer's on Friday (Molly because she was stinky and had knots in her hair, and Ginger because it's easier to pay for her to go to the groomer than to deal with the fallout from taking Molly in the car and leaving Ginger at home). However, the groomer doesn't take credit cards so I had to write a check.

A check. Who doesn't take credit cards? I hadn't written a check in about six months and it was another four months for the previous one. I had to go back out to my car to even find my checkbook. Then I had to remember how to fill the check out. I type almost everything these days, and when I do write things down the end of the word tends to trail off because I know what it says and nobody else needs to read it. (I get flack at work for my pages of checklists, but really, how else am I supposed to get a sense of accomplishment? Writing a new method? No. Marking an X in a box on my list? Yes.) I had to consciously finish the end of every word while I was writing the dollar amount.

Anyhow, Molly now looks about ten years younger with a goofy puppy cut, and Ginger is prancing around like the princess she is.

Next time I should probably just bring cash.
Posted by Theresa B (of Nebulopathy) at 9:49 PM 2 comments:

Who are you again?

My contracting pimp came by work again today. Naturally my cubicle neighbor Jon and I were discussing the results of our card game at the time. I often wonder what the people who do my payroll think when they come by in their suits and professional attitudes and I'm slouched in my chair wearing jeans, a t-shirt, and tennis shoes talking about something completely unrelated to work.

On the other hand, I don't wonder that very often because for some reason I seem to be completely unable to remember anything about my contracting people the minute they leave the building. It's become the standard joke for Rvan to quiz me on the name of the person I just talked to. (There were only two of them before today.) I see the main agent about once every two months and at least five times in the past three years I've assumed he was someone else. Luckily I never use anyone's name, so he may not have noticed.

Oddly enough I find his voice very easy to recognize, so if I hear him talking to someone else before I see him, I'm sure to pass the pop quiz later on. I used to be able to remember faces really well, but at some point in the past twenty years I reallocated that brain space for something else, presumably something really important such as the words to Britney Spears songs. (Jon started quoting "Oops I did it again" today.)

Anyhow, now there's some woman named Taylor working for them which means that the people I have to remember has increased by 50%.

The great thing about shopping for shoes on the internet is that you don't have to go to shoe stores. I actually used to sell shoes, so believe me when I say I really hate shoe stores. Unless you have a foot fetish or (possibly) completed a veterinary dentistry residency at Davis, buying shoes is something to be avoided at all costs. (Or, put more plainly, sane people don't like to buy shoes.)

Anyhow, the only bad part about shopping for shoes on the internet is that sometimes things don't look exactly how you picture them. Case in point, my new shoes. 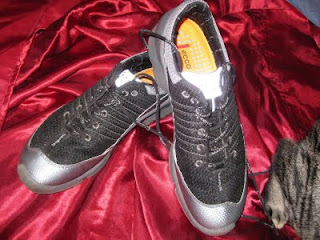 Yes, I somehow bought shoes that look like I should be strolling on the starship deck in a silver metallic bodysuit in a 80's sci-fi movie (except they don't have heels because they are "performance" shoes, whatever that means).

Yes, I could have sent them back when I opened the box. But everyone in the entire world knows I'm way too lazy to do that.

Instead I'm wearing them to walk the dogs and mow the lawn. I feel like Glinda the Good, except that she was, you know, polite and stuff. I'm more like the troll that lives under the bridge. In sparkly shoes.

Anyhow, these shoes are so obnoxious that I'm starting to actually like them.

To keep my mind off the fact that I might have to buy a new car this week since my transmission went on the equivalent of a three day bender down to Tijuana, I will give you the real reason that I remain unmarried:

Back when I was seven years old I went to a real elementary school, the kind that had playground equipment that could kill you. I have a few scars from childhood, mostly from deep knee wounds that had so much dirt ground into them that they were guaranteed to be infected, but on this occasion, I was on a see-saw with a supposed friend. This see-saw was one long plank of wood with handles on either end, and it went all the way down to the ground. Ideally the person on each end would slow their descent with their legs, but on this occasion the other person just let it plummet until it hit the ground and rebounded.

This acted a bit like a trebuchet, with me as the bucket of rocks. I went up into the air and led with my chin as I landed on the plank.

I learned a few things that day -- the physics of a parabolic arc are not to be denied, wounds anywhere on the head bleed a lot, and many people aren't good with blood. My hemorrhaging chin didn't bother me all that much (since I couldn't see it) and I didn't realize that I was even injured until the people around me told me I had to go to the nurse's office.

My mom was called to pick me up and I got some stitches in my chin, the thought of which bothered me much more than the wound ever did which is why in my school picture for the year I'm wearing a gigantic band-aid even though everyone tried to convince me to take it off for the picture.

Anyhow, the point of this story is that my grandmother visited us that year, looked at my chin, and assured me that the scar would be gone by the time I got married.

Reassurance, blessing, or curse? I'll let you decide. In any case, I still have a scar on my chin, and I'm still not married. Those old German women knew a thing or two...
Posted by Theresa B (of Nebulopathy) at 10:21 PM No comments:

Here is the main difference between working at home and working in the office (ignoring for the moment the commute, number of animals, and network lag time):

Yes, we have paradoxical climate control in the office. The hotter it is outside, the more I'm clutching hot drinks to keep my hands from aching. Every once in a while the building management tries to fix it, but really, either the people near the windows can boil, or the people on the inside of the building can freeze. There isn't any way to make everyone happy.

I have an inside cubicle in the office, which is fine because I have a window at home. (Also, who wants a view of the parking lot?) Until last week it seemed like everyone around me was moving away. I was starting to wonder if I was the human equivalent of the heart attack bench. (When Eric was a manager, three people who sat in one spot died from heart attacks, and nobody would sit there any more. The group finally moved to another building.)

Now Rvan has hired the two quietest people in the universe to sit near me. Those poor guys. The only consolation is that I'm not there at least two days a week. We'll see how long it takes before they move to the other side of the building.

Posted by Theresa B (of Nebulopathy) at 11:52 PM No comments: