It's a good thing I don't have to take reading comprehension tests any more, because things would just not go well.


You'll notice that the first one has penguins rowing and the third one has frogs swimming.


So after a few days of not reading, I came up with: 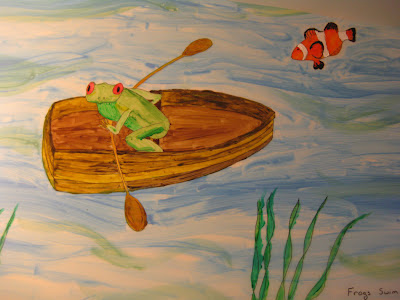 Yep. And I didn't notice until I was actually writing the title (involving frogs and swimming) at the bottom.


Whatever. It still looks better than what's on the wall now.
Posted by Theresa B (of Nebulopathy) at 11:21 PM 2 comments:

So I currently (at this moment in time) work in a large office complex where everything is about as bland as you can make it. The walls are beige, the carpet is... actually, I don't know what color the carpet is. I think it's some sort of grey/black pattern that comes in squares, but it's so boring I can't even remember what it looks like. The cubicles are beige on beige, and the ceiling is white. There is colorful artwork on the walls, but it's all prints of stuff that I think is specifically produced not to offend anyone. They all sort of look like someone swiped the test paper at the Home Depot paint aisle and put a frame around it, but I know nothing about art.

At least, that's what the art looks like everywhere except the wall right next to my cubicle. On that wall are three prints that are supposed to be some three-dimensional representation of the output of one of our programs overlaid on the geography of Rome. To say that it looks bad is an understatement. It sure as heck doesn't make the program look impressive. The only thing those pictures have going for them is that it's really difficult to see them because that corridor is somewhat narrow, so unless you stop to stare at the wall, you'll really just get a blur of blue and green out of the corner of your eye as you walk by.


It's a pixilated mess, and for once the problem is not my photography. 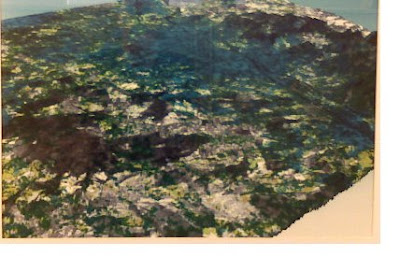 Jon and I got to talking and we decided that pretty much anything would be better than that. So I decided to fix the problem. Jon's leaving at the end of the month (unless someone comes to their senses first) -- I figure if there's a problem, I'll just blame it on him.

Since I wanted to just swap out the image, I had to make something that was about the same size. Two feet by two feet is huge, by my standards anyhow. I don't have any paper that big. In fact, all I have that size is a roll of plastic plotter paper that was going to get thrown out after the large plotter was retired. And since I was using that, I had to switch from watercolors to enamels.

Let me tell you -- enamels are perfect for people with short attention spans. This is the first painting I've ever done that I didn't accidentally smudge because one section wasn't dry when I thought it should be. (Not that the smudges ever changed the quality of the previous artwork, but still.) In fact, enamels dry so quickly that if you, say, need to stop to go remove the sheet of plastic that one of the cats is gnawing on, the paints might almost be dry before you get back.

This is the first replacement painting: 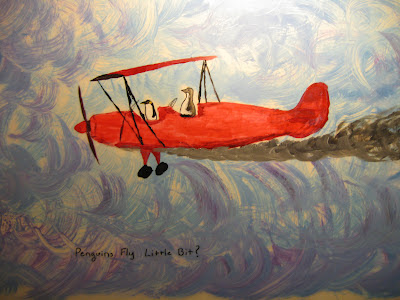 
The title is from something that Rvan's kid Tory said. I don't think this is quite what she had in mind, but you never know.

The old "art" is just flipped around in the frame, so if anyone in building management ever notices, we can always restore it to the previous picture. However, the new picture has been in the frame for two days and absolutely nobody has even noticed.

(About the second point -- I realize this isn't museum-quality art. It's meant to be interesting and funny, nothing more. My feelings won't be hurt when someone points out that it looks like something a second grader would do.)


I still have the other two to do. Tory's mother suggested that I go with another quotation from this week:


"Boogie come out my nostril."

I think maybe I'd better hold off on that one...

I actually have friends who enjoy literature. Not just the Hunger Games series (and that third book was a steaming pile if you ask me), but real lit-rah-ture. In fact, my vet school classmate Jill (aka, Jillypants, for reasons unknown to me) has a blog in which she and a high school friend are re-reading all of the stuff they read in high school English.

Then there's the rest of us. Here's a sample:

It started out innocently enough -- I was having a conversation with Eric (and I think it might have even been work-related) and I said it was like waiting for Godot, it never happened.

Then I had to admit that I'd never read "Waiting For Godot" and that all I really knew about it was that (** Spoiler Alert **) Godot never does show up.

Then Eric said "Waiting For Godot" was something that nobody actually read, but people just bought to display on their bookshelves to seem educated. We looked it up on wikipedia and it turns out it is a) a play, and b) written by Samuel Beckett. Then we read the one line summary and both of us admitted we would never go to see something like that.

Then I accused him of owning a copy of "Waiting For Godot", which he promptly denied and followed up with a denial of owning any literature with the exception of A Tale of Two Cities which he claims is a great book and the only one in four years of high school English worth reading.

I promptly started trash-talking Charles Dickens. I've read The Pickwick Papers (bloated and clearly written by someone being paid by the word) and you just can't get away from A Christmas Carol (which, like all things related to Christmas, is cloyingly sweet and should never again see the light of day). I did finally admit to not hating A Tale of Two Cities when I was in high school, because, compared to everything else we read, it was interesting.

So then we started trying to remember what else we did read. And it turns out that there was not a lot of knowledge transfer going on during our teenage years, because we came up with one book in common. In fact, I was able to name more books that the non-honors classes read (and I didn't) than I was able to come up with for the classes I was in.

Anyhow, we both remembered reading The Heart is a Lonely Hunter. Or, more accurately, I remember reading the book, and Eric remembers watching the movie in class after they'd read the book.

Here is what I remember: The main character is a deaf guy and the book was really depressing, and I sort of have the feeling that he might have committed suicide in the end, although I won't swear to that.

Here is what Eric remembers: There was a sex scene in the movie.

So there you have it. Honors English clearly enriched our lives and made us better people.
Posted by Theresa B (of Nebulopathy) at 10:00 PM 5 comments:

Way back in the dawn of time (aka, May 1981, I think but possibly 1980 or even 1979 -- my knowledge of my little sister's birthday is a little fuzzy, so sue me...) I was the cake decorator of the family. At the time I thought it was an honor, but in the ensuing years I've realized how much my mother hates being in the kitchen, so I'm thinking it was more of a Tom Sawyer-esque con job, but whatever. There are six kids in my family, and five of those have birthdays within a two month span, so I got a fair amount of practice. However, this was in the days before fondant and the internet. Also, it was in the days when the late Seventies were still holding sway, so style and taste were in short supply. Mostly I made a bunch of poorly-frosted, poorly-decorated cakes using every color of icing  available. I still claim this is far superior to serving store-bought cake though.

Anyhow, the year K-poo turned one I decided to make the following cake: 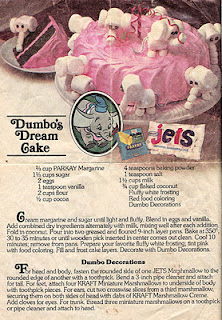 [Jojo the Enforcer tracked this down -- since my mom purged her recipe boxes a few years ago (as part of her twelve-step program of never voluntarily entering the kitchen again), I had to steal the image from this blog. Go show that blog some love.]

I was twelve (or possibly not, depending on which year it actually was) and I'd previously only made the cakes from boxed mixes. I hadn't done much baking at all at that point, whatever year it was. I missed a rather crucial ingredient and didn't have the experience to know that there was a problem until it was halfway through baking and looked like a toxic waste site with a layer of oil on the top and a bubbling dark layer of sludge underneath. Just so you know, flour is a really important ingredient when baking pretty much anything. See, I learned something. (Mostly what I learned is why I had always used boxed mixes up to that point.)

The second (post-tantrum) try went better, and here is the final product: 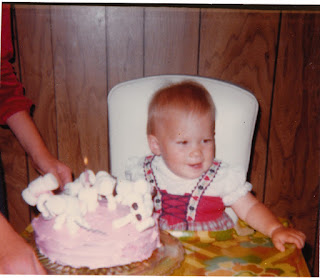 This picture is full of win on so many levels it's almost unbearable. K-poo in a dirndl-like dress! Wood paneling! That high-chair tray! The cake that looks exactly (cough, cough) like the picture in the recipe! I'm pretty sure those are my arms and I'm wearing a velour shirt. (I had at least three of them...)