I have received and reviewed the message you left on my voicemail this afternoon, in which you spent 37 seconds on a profanity-rich tirade decrying my practice of constantly calling you and then hanging up after one second. The crescendo at the end was particularly well executed, and rest assured, I have received your message to "never fucking call" you quite clearly.

However, I do feel obligated to let you know that I've never actually called you before. Never. In fact, I haven't dialed anyone on this phone for at least six months. I'd tell you exactly how long it has been, but I got tired of turning the little scrolling wheel on the front of the LG Chocolate to try to pin it down. 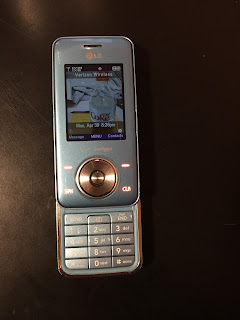 I'd send you a screen snapshot of my call log, but this phone doesn't do screen snapshots. I charge this phone once a week because I use it as an alarm clock and because I need to have something when the day comes that I drop the work iPhone that I use when I have to communicate with the outside world.


In fact, when you "returned my call" this afternoon, the phone in question was sixty-five miles away from the only person in the house with opposable thumbs, so... it wasn't me. I can only assume there is some spoofing going on somewhere. Technology -- always remember that it is making our lives better!

So, my dear angry person, I suggest you just block my number and move on with your life. Think happy thoughts of flowers and sunshine. Put down your phone and go for a walk. You may even consider talking to your doctor about blood pressure medication.

And please know that I would text you and tell you that it wasn't me, but I don't have all day to type words on a keypad that only contains digits.

Theresa
Posted by Theresa B (of Nebulopathy) at 8:29 PM No comments:

It's a tale as old as time -- where time is defined as at least 15 years. Spring has arrived here in Northern California and the greenery has exploded. In another month or two everything will turn brown and invite any passing spark to become a full size blaze, but right now the weeds are making hay while the sun shines.

This includes my lawn. Most of my front lawn has been taken over by Weedus spikus spp purpleus with some Weedus burrus spp yellowus. The back lawn too. The bees are very very happy. A few (4-5?) years ago I replaced my corded electric mower with a cordless mower. Gone were the days of connecting three 50 ft extension cords and having to maneuver around them. The new mower worked great. I could cut both the front and back lawn in one go.

Then towards the end of last summer I could only cut the front lawn or the back lawn before the battery gave out. That wasn't such a hardship. I could cut one on one weekend and the other the next. At the end of the summer it's almost entirely brown anyhow, so it was just a matter of keeping random opportunistic weeds at a level that could be mistaken for grass.

But the battery's been getting worse and the weeds are starting to win. At this point I can cut about one or two rows at the highest possible setting and then it's done for the next eight hours. I have another battery on order, but they keep pushing the shipping date, so every morning and evening I go spend less than a minute making a swath through the lawn.

As you can imagine, my lawn does not exactly fit the picture of the suburban dream. Each row is a different height since I'm slowly making my way across it. Worse, there are dandelion seed pods popping up even in the most recently chopped areas, so no part of it is even. The weeds on one side of the back lawn are taller than the little dog. She seems a little intimidated by them.

Anyhow, the new battery was supposed to have shipped yesterday. Maybe it did. I'm not holding my breath, but if it didn't I may have to give in and borrow my neighbor's mower so my house doesn't disappear under a mass of greenery.
Posted by Theresa B (of Nebulopathy) at 8:47 PM 2 comments:

I'm taking the "citizens academy" course offered by my county's district attorney. On one night a week for eight weeks I will sit in a conference room at the police station and learn about parts of the local criminal justice system.

This week there was also pizza.

There are about thirty people in the class although probably a third of them are attached in some way to the DA's office or one of the other agencies. The rest of the class is almost entirely composed of white women. (Yes, I realize I am also a white woman.) Since that doesn't really reflect the demographics of my area, I can only speculate about why that is.

In any case, during the first week the DA came in and introduced the heads of the local law enforcement groups (county sheriff, chiefs of police departments, CHP commander, and probation department) and gave each of them about 15 minutes to speak. Their talks ran the gamut.


And then there was the guy from one of the nearby smaller towns who managed to spend fifteen minutes talking about how hard it is to be a white man these days. I mean, that's not what he thought he was saying, but... I'm really hoping he was just having an off night, because if he reads people in general as badly as he read that room, he has no business being in law enforcement. It makes me glad I don't live in that town.

So that was week one. Next week we get to talk about what the DA does and how a case goes through the system. That should be interesting even though there won't be free pizza.

And finally, a bit of humor. At the end of class we went around the room introducing ourselves and giving "one unique thing" about ourselves.

One girl, a student in college, said, in this class of 30+ people, that her unique thing was "I'm a Libra". And as I'm staring at her in disbelief because there are only twelve astrological signs possible, three other people are exclaiming about how odd it is that they are Libras too!

I think maybe week two should include a refresher course on simple probability...
Posted by Theresa B (of Nebulopathy) at 9:56 PM 2 comments:

It turns out -- and I don't know how this could be possible, but apparently it is -- I am not one of the young hip kids any more. And yes, the fact that I even use the word "hip" in that context is a clue. I mean, I'm not old or anything because that's, you know, people in their seventies. But I'm not the person who thinks all the latest gadgets have any possible use other than annoying people.

The weirdest part about getting older is that I completely forget about it, and then I read things that claim Facebook is for old people and I am hit in the face with it again.

So against my better judgement, I've opened a Twitter account. (Okay, really I've opened the Twitter account as part of taking the writing career seriously.) I hadn't opened one before now because I couldn't figure out the point.

For me Facebook is for keeping track of how my actual real-life friends are doing. My friends list is small. I know every single person in real life.

In contrast, Twitter is like being bombarded with stuff thrown by random strangers. I follow less than 50 people and a couple of those aren't really active. With those select few, I can literally hit refresh all day long and pretty much always have something new to read. And I don't even follow Scalzi.

I also have 16 followers and I only know who half of them are. For some reason there are accounts that follow everybody. I don't understand why. Is my confusion because I'm too old? Why would some hockey player want to follow me? I mean, I know I'm hilarious, but am I really that much funnier than the hundreds of thousands of other people he follows?

WAIT A MINUTE! I just checked my follower list and the hockey guy is no longer on there! That bastard unfollowed me! I can't believe it. If I could remember his name I would give him a piece of my mind!

Anyhow... maybe I'll figure the whole Twitter thing out. Or maybe it will be like the dashboard in my new car and I'll just continue to look at it and shake my head.

Only time will tell.
Posted by Theresa B (of Nebulopathy) at 9:23 PM 3 comments: