I generally don't like to have the air conditioner on if at all possible because the constant noise annoys me (as do so many things...) and my electric bill can easily head into the high triple digits. But sometimes I see things like this and just give up:

(Click on the picture to see a larger version.)

These estimates  are probably a little conservative. When I passed the sign on my way to the Hollywood Market (with the "No more skinny?" owners) today, it read 111 degrees F. And that was after 5pm.

So yeah, I've had the air conditioner on for the past few days, and the dogs are more comfortable. The cats, of course, would prefer to be the little desert creatures that they are so Guido and Ripley have figured out how to go through the cat door to get to the screened-in cat porch where they sprawl in the sun on the concrete. I know Scooter wants to go out there as well, but apparently he's too stupid to figure out the cat door. This is a surprise to nobody.

Just so you know, the thrill of being able to open the garage door with just the click of a button has not yet worn off.

I'll leave you with this picture of Ripley in a box. 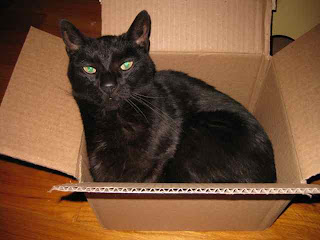 Funny comment of the week: My neighbor's thirteen year old daughter rode in the back of a police car this week (as a witness to go ID someone, not as a suspect). With the hard plastic seats, easy to hose out materials, and lack of exit options, she said it was a lot like being in a plastic pet carrier.

So here's a good way to make yourself feel really attractive: Spend all day cleaning out the garage, then decide at the last minute that you need to get some stuff from the grocery store. Now, you could take a shower and put on clean clothes, but the chances of actually leaving the house after that are approximately zero. So instead you just brush the worst of the grime off and walk to the store, knowing that they'll be closing in an hour so not many people will be there and the ones that are will look like they've been cleaning the garage all day. And then the guy walking into the store in front of you is wearing a suit. Who goes grocery shopping in a suit?

Anyhow, the garage is looking the cleanest it has looked since sometime before I bought the house. 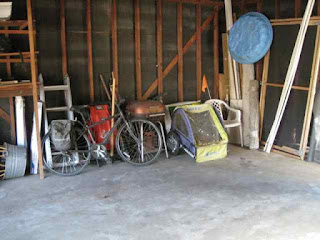 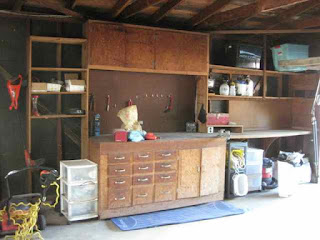 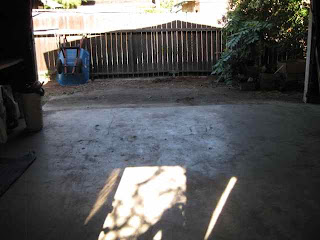 It's so clean that I could park a car in there as long as a) I was able to roll open the gate to the alley, and b) it hadn't rained in the past month so the garage door was light enough to lift.

The garage door is supposed to get replaced this week, which is good because it's supposed to rain tomorrow. Once it rains it absorbs enough water into the wood that it's too heavy for the springs. Soon I will be able to open it with a click of a button (as long as the broken three way switches that control the electricity in the garage are set to the one setting that allows current to flow).

The rolling gate, which goes between my driveway and the alley, is a fine example of how not to build a gate. You can see it in the picture above, held up on the left side by the wheelbarrow. It's twenty feet wide. Here's a closer look at it: 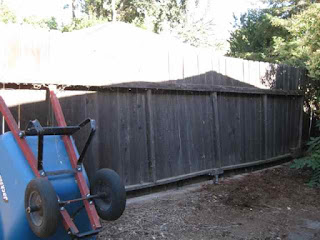 There is a 2x4 along the bottom with the 4" side sticking out parallel to the ground. Originally it had two wheels, one at either end. The first time it rained (and the wood got wet), about 18 feet of the fence sagged to the ground, making the whole thing immovable. Then my brothers came up and we put an additional two wheels on, so that problem was solved.

Luckily I have amazing carpentry skills, so I tied a rope along the length to replace the metal rail which is falling off, and added a new 2x4 on top of the remains of the old contraption. 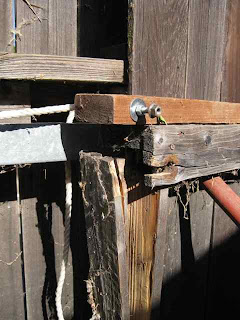 (The broken wood is where the old bolt pulled out when the rail got stuck.) 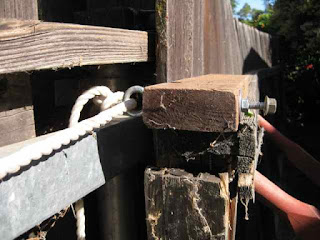 (Look at the bowing of the gate in the distance...)

All I can say is that it hasn't fallen over yet, I've opened and closed it a few times without problem, and it only has to last until the whole fence is replaced which may happen in a few weeks.

My dream of parking in the garage may yet become reality.

This post is seriously lacking cute pictures, so I'll leave you with this photo of the Kittenhead. 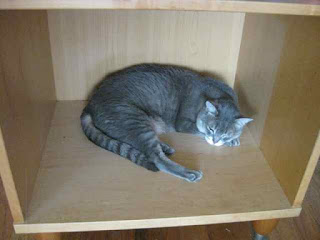 I was lounging about outside next to the pool today (3 foot diameter hard plastic with a dog bone embossed on the bottom) enjoying the new roof when I realized that I have to do a whole lot of other things.

For instance, now that there are new (primed) boards in place, I need to get the house painted. But before I do that, I should get the garage door replaced. And somewhere in there I need to get the back fence redone.

After all that I need to clean out the garage so I can wedge my car in there to protect it from the weather and hooligans. And I have to figure out what is leaking in the back shower and fix it. Or maybe just get the whole back bathroom redone.

So this week I'm going to be really productive and get as many things done as I can. This might impinge on my nap time, but I'm going to persevere...

...unless it gets really hot, in which case all bets are off.

Anyhow, here are some pictures of my cats just to keep things interesting: 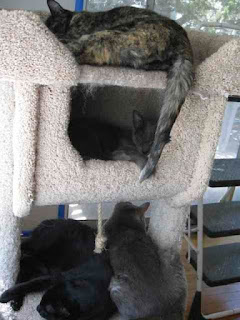 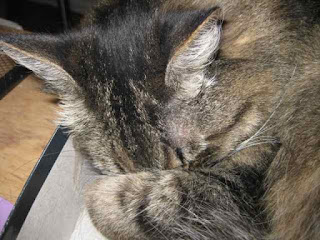 Have a good week!
Posted by Theresa B (of Nebulopathy) at 10:25 PM No comments:

So last Monday the roofers were supposed to arrive at 8 am to start redoing my roof. I even got up at 7:30 and let the dogs out so no strangers would have to deal with Dummy and Shorty.

And then I surfed the net and waited. And waited. And wondered if there was a crew of people somewhere nearby tearing shingles off the wrong house. And about the time I was reduced to reading articles about sports, I got a call from the owner saying that they couldn't get the trailer there that day, so they wouldn't be there until Tuesday. I went back to bed.

Tuesday morning I would have followed the same routine, but the roofers showed up at 7:10 am and knocked on the door. Yep, I'm sure I was looking my very best. I'm not sure what the guy said because I couldn't hear him over the noise that Ginger was making. (Naturally Ginger didn't warn me that anyone was coming to the door -- she only hit DEFCON 2 status after I answered the knock.) I'm pretty sure that he wanted to know where my driveway was. I'm thinking that's one of those questions that you just shouldn't bother asking -- if you can't find it, you probably won't be able to back a trailer onto it.

Anyhow, a whole bunch of guys climbed onto the roof and started ripping off parts of the house, making enough noise to rival Ginger's barking and the conures' screaming. I went back to bed and slept though it all for the next few hours. This answers the question of whether I can sleep through anything. Yes. Yes, I can.

The next day nothing really happened aside from the city inspector showing up. Apparently everyone was waiting for it to get really, really hot before they went back to working during the day in a spot with no shade. I may have missed something, though, because this approach doesn't make sense to me.

By the end of the week Woodland had managed to achieve the pleasant summer temperatures for which it is famous. I have to wonder, though -- if you were going to spend the day working on a roof when it's over 105 degrees F, wouldn't you bring a cooler of ice with you? I have to wonder if these guys have just completely baked their brains. They're all very nice, but still...

By Friday afternoon the garage was finished, and the dry rot boards had been replaced on the house, but there still weren't shingles. So naturally we had thunderstorms on Sunday.

As far as I know it didn't actually rain Sunday night. I think we just had a lot of thunder and lightening. On the other hand, I'm not entirely sure since I slept through the storm...
Posted by Theresa B (of Nebulopathy) at 2:05 PM No comments:

If all goes as planned, tomorrow I will be forced to get up early just like all of the wage earners...

Not because I have a job or anything like that -- the fatwa against me by my ex-executive director remains firmly in place, and besides, I remain committed to sitting on my butt for at least six months. No, I have to get up early because the roofers are coming at 8am to tear off the old roof and I doubt even I could sleep through that.

(With the return of warm, aka hellishly hot, weather, I've gotten in the habit of going to bed around 3am. When the roofer called the other day at 11am to let me know the schedule, he may or may not have woken me up...)

Woodland is supposed to be in the nineties all next week, making me once again realize that a little education is a wonderful thing if it keeps me from working on a roof in the middle of summer. I can't imagine stripping roofs for a living, but that's true for a lot of things.

Anyhow, I have no idea how long this whole thing will take. I'm assuming it will be long enough for Scooter to stress-pee on everything at least once, but not so long that the little dog stops barking every time someone is in the yard.

Could this be the thing that drives me to wanting to leave the house?