A friend of mine tried sneaking some pesto into her four year-old's pasta and got this response: "I am not eating this compost."
I laugh at his appropriate vocabulary and wish her luck at trying to get her kid to try new things as time goes on.

Occasionally Scooter makes up for all the stuff he destroys. Here is an example of how cute he can be when he tries hard... 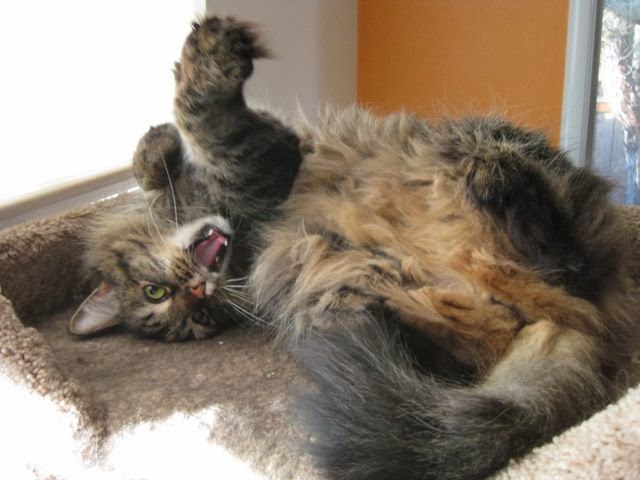 On a different note, I finally saw The Big Lebowski over the weekend. After hearing it hyped up for so many years I was just sort of underwhelmed. I think I just don't really like movies from the Coen brothers. There, I said it.

Warned you this was just a post of random stuff...
Posted by Theresa B (of Nebulopathy) at 9:08 PM 2 comments:

Middle-aged Dogs Can Definitely Learn New Tricks That They Shouldn't

For some reason, Ginger (formerly known as "the little dog" and now just "the dog") has discovered a new-found love of rolling in really stinky things.

I'm not sure why this has suddenly come up but twice in the last month she's come back inside and brought with her a smell to peel the paint off the walls.

This most recent time I made her go back outside (because I was working and didn't have time to bathe her right then), and when I got tired of her throwing herself against the sliding glass door, I went out and dumped a bunch of spray-on shampoo around the problem area and tried to wipe it off with paper towels.

Just one more reason I'm pretty sure I'm a cat person...
Posted by Theresa B (of Nebulopathy) at 8:20 PM No comments:

And the Reviews are Streaming In...

I'm trying to get my butt in gear and edit the novel I wrote in November. Motivating myself to write is easier because I can set a word count and then force myself to sit down and type until I hit that goal. Editing is a much more murky task.

I've decided to go with this method: http://hollylisle.com/one-pass-manuscript-revision-from-first-draft-to-last-in-one-cycle/, mostly because one-pass seems like the minimum amount that I can get away with. I'm on the scene by scene slog. I already know my ending sucks. The book just sort of stops. But that's on chapter ten, so maybe I'll have figured out how to end it by the time I get that far.

Today Scooter peed on the first four pages of chapter two. Personally I thought chapter two was not bad (relatively), but apparently my cat disagrees. His comments were very non-specific, though, so I need to figure out what part, exactly, he didn't like. Was it the introduction of a new character, or the general lack of description? Perhaps the dialogue was offensive to his sensitive-yet-furry ears?

The other four cats have yet to weigh in, but I'm hoping for kinder or at least less oblique suggestions.


Posted by Theresa B (of Nebulopathy) at 8:24 PM No comments:

Have Sodastream, Will Travel

Well, I'm back from the holidays safe and sound.

The trip down to Orange County was uneventful, which is no surprise because driving down Interstate 5 is pretty darn boring. It gave me a chance to spend multiple hours working on my new song "Stinky Cows", sung to the tune of "Silver Bells". You get bonus points if you add in your best Bing Crosby impression.

I stayed at the Residence Inn, and not just because I needed someplace to work on all twelve months of the hand-drawn and painted calendar that I give my parents every year. Because clearly I would never wait until the day before Christmas to start something like that *cough* *cough*. No, I stay at the Residence Inn because every day I leave, and every evening I come back and it's all magically cleaned up. They even do the dishes, by which I mean if you leave one mug in the sink, they will put it in the dishwasher and run it with one mug. After the first day I made an effort to leave more dirty dishes just so I didn't feel like they were wasting so many resources. I also figured out that the rooms have a toaster, so you could, theoretically, go to the breakfast room, grab a bagel and cream cheese, and go back to your room for breakfast, all without slowing down or talking to anyone. This place was designed for me!

The day before Christmas (which was actually the day after Christmas as celebrated by other people), my parents' oven was found to be in non-working order and it didn't even have a thick coating of dust on it. I think that oven just has Seasonal Affective Disorder because it broke last year right before Christmas as well. The stollen turned out just fine after being baked in the Dutch oven (or at least in what my mother refers to as a Dutch oven, but really an electric skillet with a lid according to the rest of the world) despite being left to rise all day during an important game of Boggle (which I totally won).

Jojo the Enforcer and her family didn't make it out to California this year, but everyone else gathered to exchange viruses the next day. I received a Chinese brush painting kit from my parents (which could possibly be seen as their attempt to get a better gift for next Christmas if one were a little cynical which of course I am not). It has watercolors, a ceramic palette and brush holder, a bunch of different brushes, and a coke spoon. I was a little thrown off by that last item, but... different cultures and all. However, I read the instruction book later and found out that it was a little water dipper, not a coke spoon. Who knew? The instruction book is impressive in other ways because it starts with one page explaining the function of all the pieces in the kit (not a coke spoon!), then has one page demonstrating the different brush strokes, and then the next page is Bam! paint this complicated fish! We all know I would have skipped any instructions in between, so it's the perfect book for me.

Sons number one and two repaired the oven, so we were saved from a Christmas dinner cooked on the propane grill outside. I ate too much, a recurring theme over the holidays. The next generation was judged incapable of doing the dishes until all of the china was safely washed, dried, and put away. Not a really good sign since the youngest one there was nine years old. These kids today...

The next day was pretty low key aside from the oven sort of not working again. And by not working, I mean failing to ignite properly despite a good flow of gas to it. I'm not going to claim there was some big ball of fire or anything... but it did blow both of the oven doors open when it finally did ignite. I think someone ought to check to see if Jeff or Mike took out a new life insurance policy on my parents recently.

After crushing my mom and K-poo in Boggle earlier in the week, I graciously let my mom win a game of Scrabble. (Yeah, it wasn't even close. And I got stuck with the Q at the end of the game.)

Anyhow, this year I managed not to get lost while driving back to Woodland, and the dog was happy to see me. The cats might have noticed I was gone. Or maybe not. The birds screamed like they always do. And the cops showed up the next day looking for some guy I've never heard of.

Happy New Year!
Posted by Theresa B (of Nebulopathy) at 9:02 PM No comments: