This Blog Brought To You By The Letter 'Eh'

Let's take a few minutes today to give thanks to our neighbor to the north. Yes, I'm talking about Canada, home of ... well, I'm sure they have a lot of cool stuff, but all I can think of at the moment is the fact that in Saskatoon they call a hoodie a "bunny hug", or so I've heard. And that's enough coolness for any country as far as I'm concerned.

Mostly we should be grateful to Canada because they fund the Canadian Broadcasting Corp, and the CBC makes police procedurals.

I love the CBC police procedurals. They exported about ten of them to the US, and every single one is almost exactly the same -- they have about four main characters and the plots are fairly straightforward. Most importantly, they don't rely on car chases or gun fights to resolve things. In fact, I'm not sure anyone in these shows owns a gun. Also, since there are only about twenty Canadian actors, I feel like I know them all by now, so there's a nice sense of familiarity.

My only complaint (and it's pretty minor) is that the music for the closing credits is done by the same person (I assume), and it always uses the following format:

Anyhow, I'd like to start a campaign to fund new closing credit music for CBC police procedurals. I mean, Canada ought to get something out of this deal, right?
Posted by Theresa B (of Nebulopathy) at 10:10 PM 5 comments:

Well, I'm sure you'll all be very pleased to know that the world has not ended in the two weeks that I've been funemployed, but I'm now finally prepared for a natural disaster just in case -- as long as you define "prepared" as "keeping an expensive backpack with power bars in the trunk of my car". Water, I won't have, and a source of heat will also be lacking, but I'll be able to do an excellent imitation of an old Jiffy-Pop popcorn pack with my emergency blankets. Also, if my roof caves in I won't have any pet food anywhere I can get to, so the cats will likely gang up and dismember me long before I run out of MREs.

I'll be the first to admit that those pre-packaged emergency supply backpacks are completely overpriced and likely don't have the things I would need, but after about five years of snubbing them because I could do something similar for half the price and yet never actually getting around to doing so, I finally just bought one. So there.

This might have been brought on by the temporary irrationality that hits me every time I set foot in the hardware store. For example, every time I go into Home Depot, I'm convinced that I'm capable of doing home repairs, despite all evidence to the contrary. If my house had an independent source of income I'd suspect it of bribing the thief who stole all the tools out of my garage.

Anyhow, in the event of a natural disaster, everyone is invited to my place. I'll have a useless first aid kit, latex gloves, and some sort of food that is supposed to stay good unrefrigerated for the next three years. You might want to bring water with you.

Also, I'd recommend bringing along some cat food just in case...

The Detritus of the Years


Things you might find when cleaning out your cubicle after a number of years... 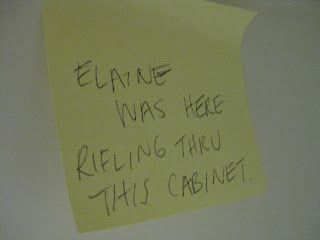 (I think this note was already in the cabinet when I moved into the cubicle. I left it for the next person to find.) 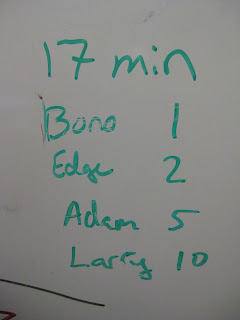 This was on Rvan's whiteboard so long that we might as well have made an engraved plaque for it. Here's the riddle: the members of U2 have to get across a bridge in the dark with only one flashlight. There can only be two people on the bridge at one time. The fastest each person can go across the bridge is given. How do you get all of the members of the band to the other side in 17 minutes? (Bonus points given for jokes about why it takes Larry so long.)

The thing is, Rvan figured it out once and then managed to forget the answer. 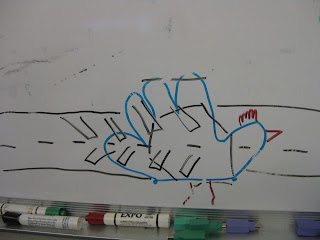 It's one of the incarnations of the quality chicken. It's been run over. Enough said. 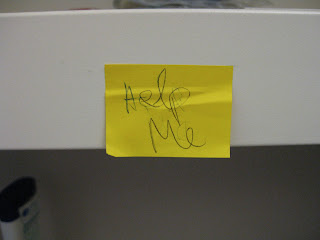 All I can say is that this isn't my handwriting...

The Art of Quitting


So after four and a half years I finally quit my job and while technically I was getting paid to write software, the following pictures document my real legacy: 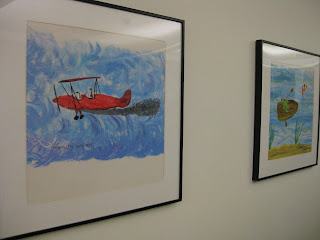 My own private art gallery 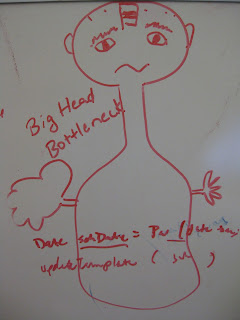 "Big Head Bottleneck"
It all started when Rvan (known for years as "Big Head" for obvious reasons) pointed out he was being the bottleneck on the project. Then it just kept getting added to as time went on -- the swollen hand was from a bee sting, and the band-aid was from a biopsy. 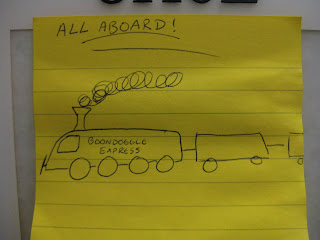 The Boondoggle Express took Jeff to the Innovation Center one afternoon. 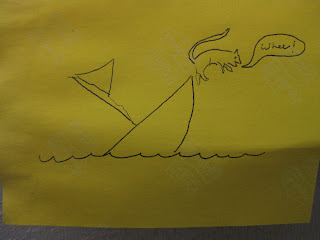 It's a rat, I promise, although there was much debate on this point by people who need to get their eyes checked. I drew it for Rvan (who switched jobs) and then I jumped off the ship myself.