We're all about rolling with the punches and making things work here at the House of Nebulopathy.

So what do you do when Effing Scooter expands his oeuvre to encompass not only paper and plastic but also computer cables? You roll with it and use an empty box to protect the work computer when you're not using it.
(Related: I'm pretty sure someone with naughty cats invented the rolltop desk.) 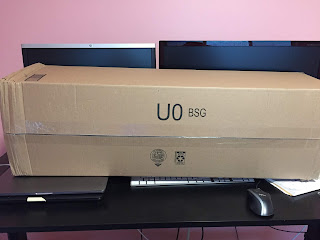 But if you just put a box over the important computer bits, there's a good chance E.S. will let loose in the box itself (ask me how I know!), so you have to tape it shut.

Problem solved... except then Ripley, the cat who likes to eat tape and cardboard, enters the picture.

Duct tape doesn't really hold up to this sort of thing. 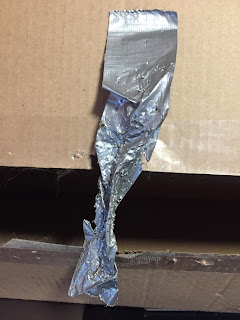 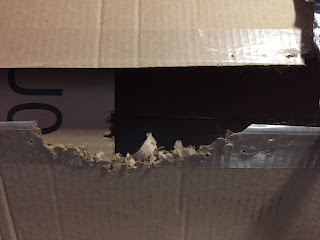 Overall working from home is a huge improvement over going in to the office, but it has its challenges.
Posted by Theresa B (of Nebulopathy) at 8:10 PM No comments:

Labels: The cockatiel wolf-whistling in the background during calls adds that extra professional touch

Yesterday I met up with K-Poo and her husband (who shares a name with the big dog -- sure, they spell it differently, but maybe the big dog just doesn't spell very well). Anyhow, she claims she misses the blog entries, so here we go.

The latest news at work is that management has decided we're going to use "Scrum". If you've never heard of Scrum, lucky you! It's a management system for agile development. It's also a cult. Generally it's used for software development -- it's supposed to keep people focused on small tasks so new software can be released rapidly.

That's the theory. In practice I've noticed it seems to encourage crappy prototypes that are released to the users as finished products, causing a massive load of technical debt that will eventually cause the project to fail because nobody can change anything without breaking something else. That sounds bad, but honestly I've seen enough projects that went slowly and were over-planned and never got released because nobody could change anything without breaking something else, so... I guess what I'm saying is that this management fad probably isn't much worse than any other management fad.

Anyhow, proponents of the Cult of Scrum will talk about all the official principles and the Holy Scrum Master and how you are supposed to have Self-Organizing Teams and quick Daily Stand-Up Meetings to keep everyone informed and identify problems early on.

That's all well and good, but in a big company, by the time something like this gets shoved onto the lower ranks -- especially groups like mine where software isn't our main product -- some of the subtleties are lost. In fact, pretty much the entire spirit and 90% of the letter of the law as well.

Yes, you guessed it. We're having daily meetings.

So far my efforts to self-organize my way off the team entirely have failed. 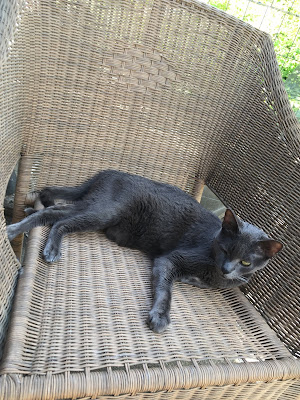 But here, have a picture of Guido enjoying his summer. His lymphoma is still in remission so not everything is terrible.
Posted by Theresa B (of Nebulopathy) at 6:23 PM No comments: