My usual schedule is such that I work from home the last two days of the week, so by Friday afternoon I often haven't talked to anyone in person for 48 hours and I'm ready to rejoin humanity just a bit.

So it's convenient that there's a coffee shop & hipster bar less than a mile away that is open until 11pm on Friday nights. They have excellent loose leaf tea served in a tea pot that allows for the removal of the tea when it has steeped (which is important if you want to avoid bitter tea), most of the baristas have beards, and they serve PBR, the hipsterest of all hipster beers. They also serve wine and I believe some more local brews, but since I don't drink I've never paid much attention to that side of the menu.

On Friday evenings they have live music. It has been a mixed bag.

Full confession: I am not a huge fan of live music. I know this is a horrible thing, but I'd rather hear the sounds recorded with decent acoustics minus the crowds and echoes and weather warping the instruments. I had one album that had amazing cello music that I finally gave up on because you could hear the cellist breathing and soon that was all I was concentrating on. But as background noise in a cafe... I can deal with it.

Here are the acts that I remember thus far:
And then there was the duo last night.

The two guys started their set staring at sheets of paper on a music stand, and I looked around the room trying to figure out how the brick walls and steel beams could be producing the harmonics they were because it sounded like the two guitars were playing in completely different keys. One of the two was singing, and he seemed to be striving for a third key altogether.

Now I played violin in grade school, and clarinet in high school for a bit. I can play a few basic chords on the guitar and pick out some things on the piano. I was in a marching band that competed all over the state. I've played in a lot of terrible concerts. I know pretty much everything that can go wrong from broken strings, to slipping in mud, to stadium echoes causing half the band to be one full beat behind the other half. This was in a whole different category.

Anyhow, they finished the song, and most of the people in the room interrupted their conversations to clap and it felt like one of those dream episodes where everyone else is hearing something completely different from you, because nobody else seemed bothered.

Just as I was starting to wonder if they'd hipstered the tea I was drinking, I heard the singer talking to his friend. "Oops, looks like I was supposed to be using a capo on that song" confirming the fact that they had played an entire song with the guitars in different keys. And hadn't noticed.

The rest of the evening didn't get a whole lot better musically-speaking. They repeated the same problem (as far as I could tell) about four songs later, and then there was one point when the second guitar seemed to be going off in a different key for a completely different song. That was the point I started laughing so hard I was almost crying.

Anyhow, the music may have been a disaster but I can't say I didn't enjoy myself.
Posted by Theresa B (of Nebulopathy) at 8:59 PM 1 comment: 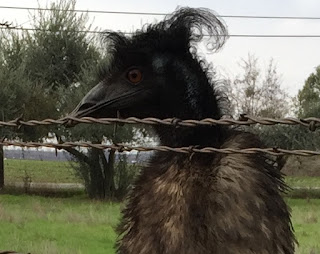 We ran to the emus again today. (Sidenote: wouldn't "Running To The Emus" be an excellent band name? Or possibly a self-help book. I can't decide.) I called a brief halt so I could get photographic evidence which totally messed up my split time for that mile, but I got the picture. Then I got home and looked at it. I realize this appears to be one of those "Find these seven items hidden in the picture" things, but I swear the big dog and one of the emus are in the photo below. 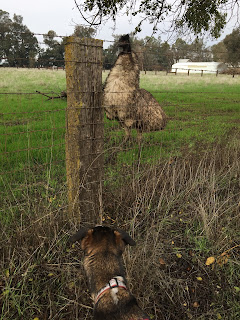 Anyhow, I've signed up for the 10k next month. I'll have a number with a chip and everything. This is the first real race I've ever run -- last year's 5k with bounce houses doesn't really qualify -- and I'm finding out there all of these things that everyone else knows about and I remain clueless. For instance, they are selling compression sleeves at the run. Why do I need to compress my arms? Are they to cover my non-existent tattoos? Is there a catwalk in the middle of these things? I HAVE SO MANY QUESTIONS!

Here are the stats for the day:

One of the management fads of the 1990s (which maybe had a Q in the name but I can't really remember) included the mantra "There's no quality without metrics". The point of it, which I actually agree with until it's taken to the extreme in a management fad, is that you have no idea whether you are making things better or worse if you don't make objective measurements to monitor your progress toward goals.

So here are the metrics for today's run:
Anyhow, I am maybe in training for a 10k in March. I haven't signed up yet. We'll see.
Posted by Theresa B (of Nebulopathy) at 2:49 PM 1 comment:

Time to Dust Off the Resume?

Remember back about a month ago when I said it would be funny if I took over the unused internal blog of our group at work and started posting things on it? The idea was that I would post something funny but at least marginally work-related and see how long it would take anyone to notice.

So today I had to explain to someone why the data wasn't what she was expecting. It's something that I'm sure is going to keep coming up, so I thought "hey, this is the perfect thing to write a blog post about". Then, when the next person asked me the question, I could just point them to the blog post. Great idea, right?

I wrote the entry, titled something along the lines of "Why these fields aren't correct" and in it I explained where the data was coming from, so if it wasn't right the person complaining could go fix it themself and stop bugging me. I think I may have even used the phrase "It's your fault". The snark level was probably about 7/10 -- a little high for corporate America, but not completely rude and I figured nobody would ever see it anyhow.

So I finished it and clicked on the "Publish" button and started working on something else.

About five minutes later I had to call my boss to ask him about something unrelated and he answered the phone laughing. "I'm not done reading it yet, but it's really funny." 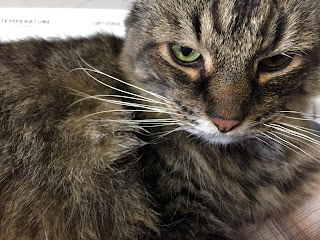 Scooter is contemplating my life choices

Turns out that it sends mail to people when a new blog post is published. I thought maybe it was just going to the people in the region, but while I was on the phone I got a notification that someone from New York I'd never heard of had "liked" the post.

Anyhow, my boss told me that he wouldn't be the one to fire me over it. Then when we finished the conversation he said he'd see me on Monday assuming I still have a job by then.
Posted by Theresa B (of Nebulopathy) at 7:21 PM 2 comments: