As I've gotten older, my views on a few things have evolved.

I now realize that it's my duty as a citizen to vote just to cancel out one vote cast by someone who's stupider than I am.

Also, I now consider the fact that maybe my big dog isn't as stupid as she appears and that she's really doing everything she does just to mess with me.

And most importantly, I now know that work potlucks are a great place to cement a reputation as someone who is just odd enough that she should be avoided by everyone without going overboard and being escorted out by security.

For this year's Halloween potluck, I've decided to forgo recipes completely and just make sure the colors are what I want. I figure as long as I don't actually poison anyone it's all good. And if I do poison someone accidentally, they'll never figure out what dish it was anyhow. That's the beauty of potlucks.

So yeah, if you're in building eight this Wednesday, think twice before taking a large serving of the orange and purple food.

And don't forget to vote.
Posted by Theresa B (of Nebulopathy) at 10:56 PM No comments:

King of the Castle

In our annual tradition, Jeff and I made a "cake" for Liam's birthday (number eight and he learned how to tie his shoes just in time!).

This year he wanted a castle, so with a combination of fake Rice Krispies and "Coco Dyno Bytes" (fake Coco-puffs), we made stone walls. Never let the two of us loose in the kitchen -- what inevitably occurs is that we start talking about something while we're stirring marshmallows, and the next thing you know half of the ingredients end up without the proper food coloring. But really, it allowed for some contrast between the walls and the towers, so I'm claiming it's not really a mistake. 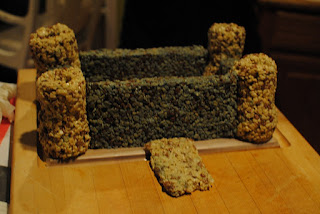 Anyhow, I think this year's version can be considered a success, especially compared to the tank we made last year. 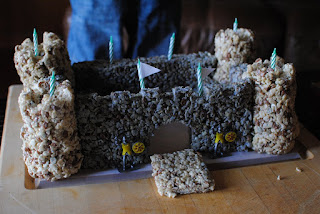 Of course, when we finished Liam asked where the actual castle was...

A Gentlewoman of Verbena

(The title is supposed to be a Shakespeare reference, for those of you who didn't make it past the sex scene in the movie version of "The Heart is a Lonely Hunter"...)

Over a year ago I got a sprig of lemon verbena in my veggie box. I'm still not sure what you're supposed to do with it in the kitchen, but it smells great to me -- a bit like Lemonheads candy. (I know it's a little weird that I think a plant smells like some processed sugar snack. I'm probably supposed to think that Lemonheads smell like lemon verbena. So sue me.)

Anyhow, I've been trying to find a lemon verbena plant in the store so I could have my own growing Lemonheads-scent factory, but I haven't had much luck despite the fact that my neighbors had a plant growing in their backyard that they ripped out because it had gotten bigger than they wanted in the spot they had it planted.

I finally gave up looking for it locally and ordered it on-line. And because I had to put a number in the box to indicate how many I wanted, I ordered ten of them. That sounds like a lot, sure, but to put it in perspective, I accidentally planted twenty brussel sprout seedlings a few weeks ago, all of which are still alive and thriving.

So I spent the weekend planting twigs of lemon verbena in my back yard. Hopefully at least one of them will live.

I also ripped apart the back of the couch on my patio, and tried to find additional artificial turf for the dogs to pee on so I don't have to spend a bunch of money on another "Tinkle Turf" to put in the other spot they like to pee.

Actually, it's not so much the money as it is the gigantic box with the words "Tinkle Turf" on the outside being delivered to my door.

Maybe I can get them to gift wrap it before delivery.

Posted by Theresa B (of Nebulopathy) at 10:27 PM No comments:


Well, my neighbors failed to take the bait, so I'm taking the couch apart, and it's actually pretty interesting.

I'd always assumed that couches were made of... well, I'd never actually thought about it, but I guess I was expecting something more expensive, or at least durable. 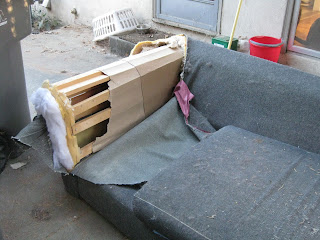 I'd also assumed that it was mass-produced in some way. But on the back of the cardboard it looked like hand-drawn schematics. 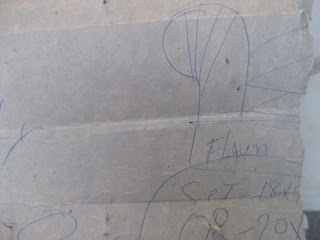 And then there were the calculations: 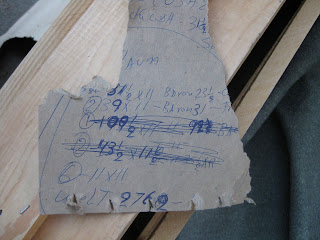 So I'm thinking now that it was a one-of-a-kind couch, an artisanal thing. Maybe I shouldn't have destroyed it. Maybe it was worth something.

But I still didn't want it in my living room.