So I finally got around to watching the Star Trek reboot from 2009 and while I found it reasonably entertaining, JJ Abrams certainly went out of his way to make it feel like we were back in the Sixties.

At least that's what it felt like to me.

Even though I think it's in fact just a case of really regrettable casting, the lack of racial diversity could possibly be explained away by hypothesizing some sort of evolutionary bottleneck some time between now and when the film takes place. For example, if the entire population of the earth was killed off except for the executives in Hollywood and their current wives, one would achieve approximately the correct on-screen racial mix. So there, we've explained that away.

What I was having a harder time with was the lack of women in the future. Sure, the lack of strong female characters is just bad writing, but it appears that the actual ratio of men to women is skewed way beyond India/China birthrates. So you either have to assume that they've found to a way to gestate in a box, or you have to assume that all of the women are just... somewhere else.

Then it hit me -- this is the perfect thing to use as the premise for the next Star Trek television show. I've seen suggestions that they base the next show on Starfleet Academy, but I think you'll agree that this will have a larger audience. Without further ado, I present to you


In ST:HW the audience is introduced to one of the worlds that contain all of the women that might be traveling the galaxy or governing worlds if they were able to worry their pretty little heads about things like that. Instead, these young nubile women compete in fashion contests attended by Starfleet captains on vacation.
When not walking the catwalk, the women visit the "Carrousel" to cheer the vaporization of the older women when even Botox and plastic surgery can't keep the older women looking attractive enough.


Sadly, this show is probably more likely to get made than a JJ Abrams Star Trek film with strong female characters. And that is depressing me today.

Anyhow, on a more positive note, the puzzle is done... 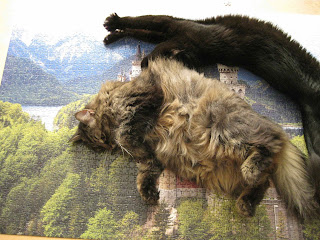 Maybe I should just write a screenplay.
Posted by Theresa B (of Nebulopathy) at 10:21 PM 2 comments:


I have run out of new brands of cider to try, but my aimless wandering through the alcohol aisle brought me to this: 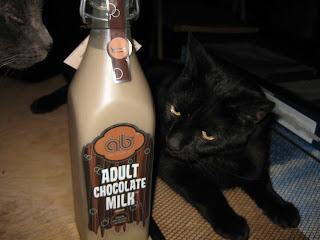 Yes, the advertisers have clearly been watching me. It's some sort of 40 proof vodka liqueur. Another fun fact is that it is made by the Adult Beverage Company based in (wait for it!) Temperance, MI. That made me laugh, even before I drank any.

Here is a direct quotation from my first sip:

So not really what I was hoping for. Maybe I should just once again give up on finding something I like to drink for another decade or so. The bottle is kind of cool, though, so I can probably reuse it for flavored oils or vinegar if I ever finish the stuff that is currently in it.

I also bought a bottle of straight vodka earlier this week. (Hm. My alcohol purchases have really gone up during my time of funemployment. I swear it's not that significant.) I'm making peppermint extract to use in my ice cream when the ice cream maker finally arrives. So far the extract looks like a bunch of leaf bits floating in green vodka. I'm hoping it doesn't start to mold.

Now all I need to do is decide which color of roof to get. Decisions, decisions.
Posted by Theresa B (of Nebulopathy) at 10:00 PM 2 comments:


In honor of Cinco de Mayo I'm giving the cider comparisons a rest today and drinking a margarita. Or it might be considered a smoothie with tequila since I used whole peeled grapefruit and limes along with strawberries, ice, and tequila. It's actually pretty good although I think I could have used less ice. 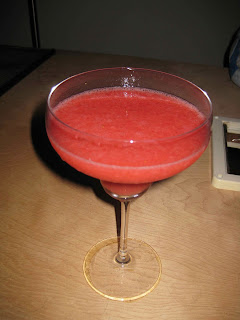 My project for the week was to finish redoing an area that looked like this but worse: 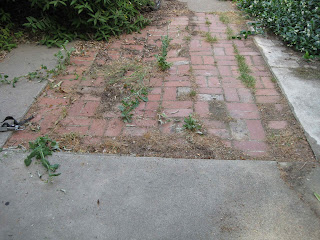 (Naturally I didn't take before pictures of the actual area I redid, but just imagine something like this except with the bricks at multiple levels including one area where there was a six inch drop.)

The person who did this originally knew even less than I do about brick pathways. The bricks are mortared together on top of dirt, with no gravel or sand underneath. I guess the bricks on one side ended up being a little too high, so mortar was added in a slope on top of the existing concrete to make it less obvious. About a year after I bought the house the bricks started to become increasingly uneven.
This project is another example of me going to the hardware store and believing that I have real skills. I pulled out all of the bricks, knocked off the mortar, bought sand and gravel, spent some time trying to make things level, tamped it down, put in an edge to keep the sand in place, and finally got to the point of putting the bricks in. I was planning on leaving a large rectangle free in the middle for a fig tree. Today I finally started putting the bricks in. And that's when I realized this: 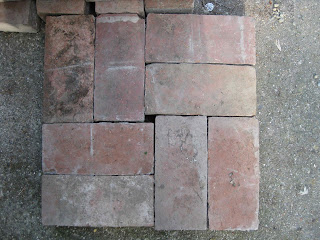 In case it's not apparent from this picture, these bricks (henceforth known as "British bricks") aren't 1x2 (or actually 4"x8" which is the standard US brick). They are 8.5"x4". There's no way to alternate vertical and horizontal bricks without staircasing or leaving a gap in the middle. What the hell? First those bastards stick us with miles/pounds/ounces/etc. and now I have these stupid British bricks.

So my plan to alternate blocks and use dirt just in the middle of the rectangle changed to adding a strip of bricks along two sides. This is one side. (I need more sand to do the other side.) That is the actual fig tree, though. 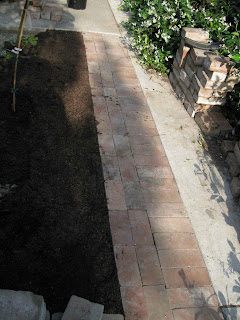 I guess it still counts as an improvement, but probably just barely.

And now for the obligatory progress report: 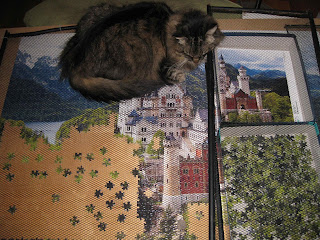 Enjoy your week. Peace out.
Posted by Theresa B (of Nebulopathy) at 9:57 PM No comments: