*** 31 Jan 2018 -- I've unpublished the rough draft chapters, but if you want to the novella shoot me an email and I'll send you the whole thing as a pdf.
-------
So my sister sent me mail to ask why I haven't written a blog post since August. (Then, a few days later, she sent me another email asking me if I wanted another dog because she knows of a great dog that needs a new home. Because clearly someone who already has two dogs, four cats, and three birds is in dire need of another dog. But I digress.)

I have a bunch of answers, ranging from the politically angry to the generally snarky, but it all boils down to this -- because I haven't felt like it.

However, that's all going to change because February is Thingadailies month. That's right, it's the "make something and post about it every day" month. Last year I did the origami-like things that were fairly successful except for the one that really looked like a swastika and oh god, am I responsible for the angry yam being elected after all? * deep breath * Anyhow, that gave me something to do every day and then Scooter peed on them all and that was that.

This year I've decided to try something different.  I'm going to write and post one chapter each day, encouraging blog reader participation along the way.

Here are the "rules":
So that's the plan. Feel free to give me suggestions.

And now here's a picture of the big dog in his favorite bed: 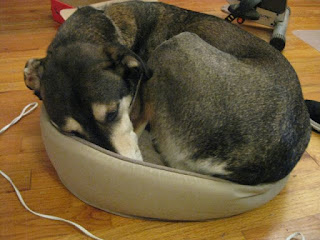 Posted by Theresa B (of Nebulopathy) at 9:01 PM No comments: