Recently I installed a geocaching app on my phone. You know geocaching -- people hide a box with a log book and then other people get the coordinates and go find the box and sign the log book. I've been feeling very lump-like lately since it's been too hot and smoky to run for about six weeks and I've been using the extra time to eat more.

So I decided to try geocaching. When I told my friends my plan one said "Do people still do that?", which is just further proof that I am the sign that a given fad is over.

Anyhow, instead of eating more ice cream for breakfast this morning, I grabbed the dogs and headed for a local spot. It wasn't that far away, just on the edge of town due south from me, and there's a park nearby, so I figured it would be a good one to start on. Also, the difficulty was listed as easy. 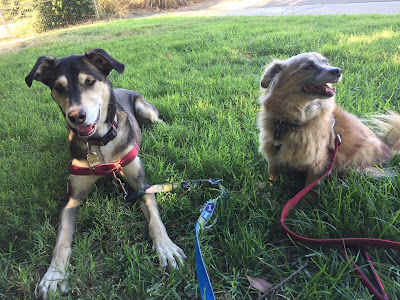 It wouldn't surprise me if someone pointed out a cache box in the background.

I probably should have picked a different cache when I read the past comment that said "clever hiding spot!". I'm the world's most unobservant person. Even wearing my glasses I could miss something in plain sight. And something cleverly hidden? Lost cause.

I looked around for a while. I'm a little surprised nobody called the cops. I never found the cache. The app said I was in the right area, but there weren't any more directions. So I took a couple pictures of my dogs and then I was going to take a picture of the sign at the end of the road but half an hour of GPS usage on my phone had killed the battery. Besides, it was getting hot. And I was trying not to get frustrated by my new "hobby".

Should we take bets on how many locations I can visit before I find a cache?

(It's still only the second worst new hobby because of the whole Pokemon-go fiasco a few years ago.)
Posted by Theresa B (of Nebulopathy) at 9:48 PM 1 comment:

One of my goals for August, yes, this August, is to start querying my novel with agents.

In a perfect world, this is the sequence:
1) I send a query to multiple agents describing my book.
2) One or more of them offer to represent me.
3) I carefully pick the one who will be the best for my writing career.
4) My super agent queries the book with editors at publishing houses.
5) The publishing houses get into a bidding war.
6) I get a seven figure advance.

In reality this is what will happen:
1) I send a query to multiple agents describing my book.
2) Half of them eventual send a form reply, the other half never respond, leaving me to wonder how long I should wait before I consider it a rejection.
3) I obsessively tweak the query and send it out to the next group of agents.
4) Goto step 2.
(See also, Dijkstra's "Go To Statement Considered Harmful")
5) Eventually I run out of agents to query.
6) I either self-publish or put the book in a digital trunk and forget it ever happened.

So yeah, good times ahead.

Today I was trying to figure out which agents to put in the first batch and I realized it's a lot like online dating. You start with a huge list of agents. You filter out the ones that accept the right genre and then you're down to something under 200. Now you have to prioritize them.

Are there comments from other writers saying "Agents at this agency seem to last about two months and then disappear"?

Anyhow, I'm just going to be looking for an agent who's interested in what I have to offer and won't leave me buried in a shallow grave in a national forest.