It's November, so that means it must be time for another round of National Novel Writing Month, during which I aim to write at least 50,000 words during the month.

This year I am back to my normal plodding progress. If I'm concentrating, I can write up to about 700 words in an hour, so really the only thing for me to control is how much time I spend. I hate getting behind, so I try to hit the 1,667 quota every day. I usually go a bit over, which gives me a good buffer for days when, say, I have to take the dogs to agility right after work. 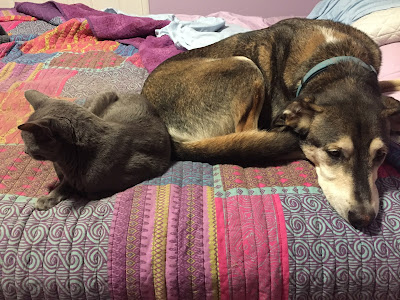 You can tell it's cold because otherwise the big dog would have barked and flounced when Guido sat down next to him.

(Agility has been restarted, but it's at my trainer's facility 45 minutes away, in dueling banjos territory. I'm not sure if people who post 8 foot tall signs with misogynistic and racist sayings about political figures just naturally get shoved out of more polite society and end up in the hills with no close neighbors, or if being out in the middle of nowhere just addles people who are prone to it, but the narrow roads are scary for more than one reason.)

Anyhow, this is how things are going for the novel currently referred to as "Sheep Heist 2", which doesn't have a heist and not many sheep. (I mean, I have to call the file something, and the first book did have sheep and something like a heist, so there is logic being followed here.)

Dark blue is my progress, light blue is the progress needed to make it to 50k.

Because November and NaNoWriMo are traditionally a time to work out new ways to procrastinate, yesterday I made candied lemon and orange slices. 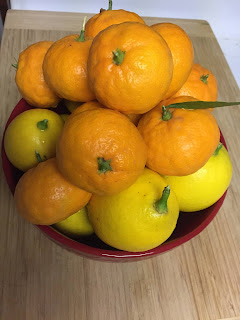 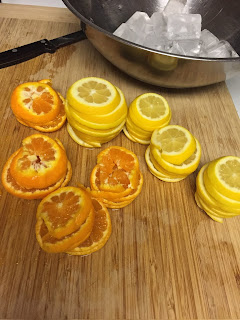 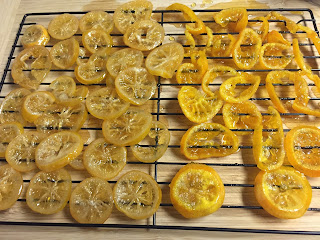 The orange slices didn't hold up as well structurally -- they were harder to cut to begin with -- but they tasted great. The lemon slices looked better. I chopped some of them up and used them in lemon cake today in place of the lemon zest, and it was quite good. (I also made a few other substitutions, some intentional, some because I forgot to read the recipe before I started, but it all worked out, so there!)

Anyhow, that's what is going on these days. I won't be traveling this December, so I'm going to try to get another book close to being ready to publish. And also hanging out with the animals, including this majestic fluff ball: 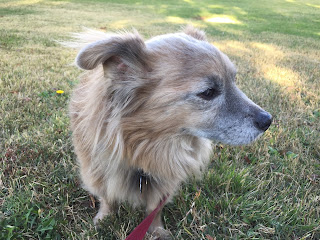 Her agility days are behind her, but she still enjoys doing all of her little dog things.
Posted by Theresa B (of Nebulopathy) at 8:11 PM No comments: