Or Possibly, Just Call Me A Tree Falling In A Forest With Neighbors Who Were Out Of State For Thanksgiving

Yeah, so it turns out that my avoidance of my neighbors might have been completely unnecessary because Friday morning I saw them drive up and unload a bunch of luggage from their car.

It was a lot easier to keep track of them when they still had the senile old dog, because every time they left her alone she would wander around outside and bark. Sure it was occasionally a little annoying, but I figure I had no right to complain on that score since the only difference was that my senile old dog did all of her barking indoors.

Anyhow, now I feel slighted that they left town for Thanksgiving and didn't even think about the fact that I might have been counting on them to invite me for dinner.

The world today... You just can't count on anyone any more.
Posted by Theresa B (of Nebulopathy) at 10:53 PM No comments: 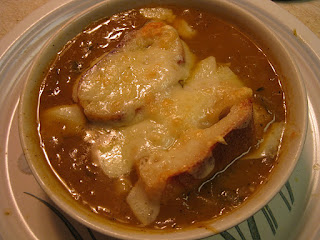 Posted by Theresa B (of Nebulopathy) at 9:13 PM No comments:

Yes, it's almost Thanksgiving again, which means that I only need to avoid my neighbors for three more days. As the saying goes, praise the Lord and pass the butter.

It's not that I don't like my neighbors -- I actually like them quite a bit, and they have a comfortable couch, which is something I'm sorely lacking. I've even forgiven them for the whole Uncle Walter thing, especially since there's no danger of a repeat seating chart land mine. It's just that I like lazing around my own house even more, and my attempts at polite conversation are getting worse and worse as time goes on. Also, Thanksgiving is a weird holiday for vegetarians when not eating with other vegetarians. (Even when eating with "almost a vegetarian" folks.)

So, yes, this year my plan is to again hang out in my house and eat a bunch of French onion soup (with melted cheese, of course) while lounging in my sweats. The only thing that could possibly go wrong is a chance encounter with my neighbors before Thursday. I know they only invite me because they think it is sad that I'm alone for the holidays, so really, I'm doing them a favor by walking the dogs at odd hours. If I could actually get my gate open I'd park in the driveway behind my house instead of in front of it for the next few days. Maybe I should just leave the lights off outside for the duration, just to be safe.

So anyhow, wish me luck in my skulking, and enjoy the gluttony of the day.
Posted by Theresa B (of Nebulopathy) at 11:20 PM 2 comments:

I walked downtown last Sunday with the express purpose of spending money, which felt a little odd, but my reasoning was that I'm always talking about how the downtown area has so many vacancies and I rarely spend money to support it.

For those keeping score, the nutritional quackery store closed a few weeks ago, and Dee's (which replaced Jim's Store) went out of business in less than six months. However, one of the restaurants that went out of business is being renovated and is opening up soon, and there's another gourmet hamburger place that recently opened.

Anyhow, the next time I feel the need to implement my own personal stimulus plan, I should probably not pick Sunday. Almost everything is closed on Sundays. I really ought to know this after living here for almost a decade. But the Western wear shop was open and I now know where to buy all of my camouflage clothing. (I did buy a thermal shirt there, so mission accomplished.)

I considered buying a skateboard, but decided that I didn't need to get that crazy. The mini pet supply store was open and I could have bought multiple Halloween costumes for the little dog, but I decided I would rather just give the shop money to stay open rather than buy clothing for my dogs. I did buy another set of clippers (since I think I permanently loaned the last pair to someone) so I could clip the big dog. I'll be sure to take before and after photos. How bad can it be?

Maybe next time I'll just get drunk in The Stag.
Posted by Theresa B (of Nebulopathy) at 10:54 PM 2 comments:

Do you want to know what happens when you make fun of your boss and his mumbling on your blog? You get voice mail like this:

Program. Also, for apartment. Eating. Hello, the time, watch out. For more of it, try track track. It is Good luck with that. Bye, bye. 5.

That's just about what he said, too.
Posted by Theresa B (of Nebulopathy) at 9:39 PM No comments:

What is seen cannot be unseen...

Apparently all good things must come to an end, and Darth Vader has finally been taken off the lawn.

However, in the days preceding his departure, his cape was blown out and it stuck to nearby branches, just as if he was holding open a short black trench coat.

You've never seen a flasher until you've seen short chunky Darth Vader flasher.
Posted by Theresa B (of Nebulopathy) at 10:57 PM No comments:

Luke, I Am Your Blubber

I live in a town where people tend to decorate their houses for the holidays. Christmas is always the biggest season, of course, to the point that I saw one lawn with three (indoor-only) power strips chained together in order to power all of the blinking crap covering the grass. During the rainy season. It's a wonder more things don't burn down around here.

Halloween is another big decorating holiday. Pretty much everyone has a few pumpkins by the front door, but some people spend a little more time and effort. And while most of the decorations were down by Wednesday evening (thanks, in part, to the winds that kicked up), some people seem to be going for multi-holiday decorations.

It would be hard to justify keeping ghosts hanging for Thanksgiving, but there are some more non-traditional items that don't exactly scream Halloween. I'm thinking of one particular house which still has a Darth Vader dummy on the front lawn.

I'm not really sure what Darth Vader has to do with Halloween, so I suppose he could be just as relevant for Thanksgiving. I mean, Thanksgiving is about family, right, and why not have an icon who is best known for reconciling with his son?

The best part about the Darth Vader dummy is that the helmet was clearly bought at a store, along with the cape, but the rest of the body was assembled at home. His torso looks okay, with a black shirt, but his legs were made from stuffing black tights. The problem is that the tights were obviously made for a woman's figure, and he's a little overstuffed, so he's got big hips and chunky thighs. Every time I pass the house I think "Wow, Darth's really let himself go."

I'm sure these people wonder why I giggle every time I pass their house.
Posted by Theresa B (of Nebulopathy) at 7:07 PM 1 comment:

I recently set up a Google voice account because... well, it's free, I can screen my calls, I don't have to give out my home phone number to people at work, it doesn't require me to turn my two decades old answering machine on, and it just seemed like a good idea.

Overall it has worked out pretty well. The call quality is usually pretty good and aside from the really poorly thought-out Google voice interface, it's easy to use.

"Hey Theresa, it's Ashraf, it's about 140. Gimme a call me when you have a chance wanted to ask you if We send revenue assurance and activation notice for L T E Not sure if they're included in the email distribution. I have someone suggesting that they are getting emails but I don't have any requirements on thinking maybe that was something about it later on. I'll send you an email so maybe you don't have to call me back and just like that alright. Talk to you later. Bye."

This is so close to what Ashraf actually said, I was really impressed. It got acronyms and some uncommon words (revenue assurance). Aside from a few odd punctuation choices, it's almost perfect.

However, Ashraf speaks pretty clearly without a discernible accent. The next call I got was from a developer who doesn't speak English as a first language and tends to speak very quietly.

Hi. This is a good morning, this is called Georgie end of this team. I just want to call you regarding the The made which I could try getting paid modification. The second decisions. Please. Call me when you get this and such. Bye.

(There's no Georgie working on the project.) I couldn't figure out what this was about, but after listening to the message I wasn't any better informed, so I'm giving Google a pass on this one.

So I was still pretty impressed. Then I got this call from Rvan:

The Thank you. Bye truest friend Al papers and and and you make out of the just calling. We have a Unit 3 E to talk about. Carlie, and just wanna make sure stuff alright with the call comments. Never mind with this price. Rich, email me, but otherwise we're doing okay bye bye.

(There's no Carlie or Al working on the project either.) This sounds very mysterious, with Unit 3 E and all, but I'm pretty sure that wasn't in the actual source.

So, yeah, Google voice. Apparently it only works really well for one person.