May the Luck O' the Pot Be With You!

The annual Halloween potluck is tomorrow. For some reason (probably because Halloween is actually tomorrow) it was scheduled for a Monday instead of Friday, so I have no excuse to avoid it. What does it mean when I spend 40% of my week working from home and still seek excuses to avoid my coworkers? Actually, it just means that I have no idea who half the people are, I'm actively trying to avoid another quarter, and the remainder I see three days a week anyhow.

I'm making what turns out to be a 1950's casserole stuffed into a pumpkin. Or three little pumpkins in this case, since it proved difficult to buy one large pumpkin the day before Halloween. But other than that it has all of the traditional ingredients: cream of mushroom soup, mayonnaise, and Cheddar cheese. Healthy? Not a chance. I only hope it's at least edible. Not because I care about the potluck, but because I'll be eating the remainder for the rest of the week.

At least I haven't resorted to the ultimate potluck snub, the "Vienna franks in lime Jello" masterpiece.

Maybe next year...
Posted by Theresa B (of Nebulopathy) at 9:47 PM No comments:

It is once again birthday time for my (nearly) seven year old nephew, so of course that means it was time for Jeff and me to create a birthday cake.

The birthday boy wanted something from Star Craft. Yes, a video game. And not even the current Star Craft. Jeff doesn't have the hardware to play anything released within the past five years, so this is the original game.

We all know how much I like video games.

I have to admit -- I wasn't feeling very inspired. At first I was thinking that it was because we were creating a cake based on a thing that didn't exist, unlike the Kraken and the Storm Trooper. Then I thought about that statement and laughed.

So, given all that, here is the "Terran Siege Tank". 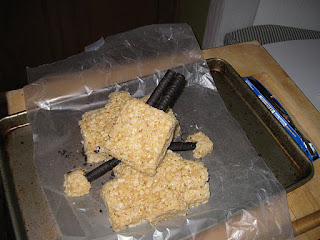 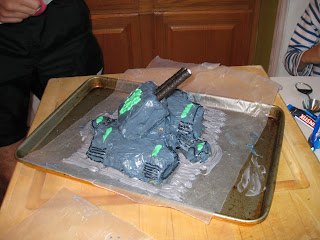 Yeah, it's a little underwhelming. Oh well. The birthday boy was pleased that he could put red candles in the gun barrels "just like it's firing".
Posted by Theresa B (of Nebulopathy) at 10:59 PM 2 comments:

I went to what used to be the Pot Belly Deli this week for lunch. It changed names about ten years ago, but I prefer the horribly inappropriate old name to the new bland "Deli Delight". The food hasn't changed in fifteen years.

So while my sandwich was being made, Victor, who hadn't heard me order, looked up, said hello, then asked "Vegetarian Delight?"

Apparently I'm a little predictable, but there are exactly three vegetarian options on the menu: one has cream cheese (which I don't really like in a sandwich), one has olives (devil's donkey droppings), and the third has cheese. You can't really go wrong with cheese unless it's one of those stinky expensive kinds which this isn't.

I tried to make a joke about it by responding "It's almost like I always order the same thing or something."

That's when Victor looked at me and said "You're an engineer, aren't you?"

Totally a compliment. It has to be.
Posted by Theresa B (of Nebulopathy) at 12:22 AM No comments:

The Action and Adventure Never Stop

As usual, I was going to get a bunch of things done this weekend, but, also as usual, I didn't really do any of them. I did mow my lawn and tossed a chicken over the fence. (That last bit isn't a euphemism for anything -- one of my neighbors' chickens was in my back yard when I went out to mow the lawn, and I'm not sure what the dogs would do with a chicken, so I helped her back over into her yard.)

I also watched the movie "Hanna" which had some good acting but a storyline that wasn't all that well thought out. Then I watched the movie "Blitz" with Jason Statham which actually had a better plot, something I really hadn't expected from an action film. What is this world coming to?

I also watched the pilot of "Xena: Princess Warrior" which was actually pretty good for what it was. I'd never seen any Xena episodes, just read the odd comment about the show and heard a few people talking about it. My main impressions: that "ayiyiyiyi" thing sounded different than I expected it to, and the whole Xena-Gabriella relationship wasn't so much a subtext as just plain text (ie, rot26 encrypted for the old-school geeks among you). There's no way that was unintentional.

I didn't actually talk to anyone for two days. (To borrow a line from the show "In Plain Sight": "Best two days of my life.")

So there you have it. My weekend in a nutshell. I look forward to spending many more like it.
Posted by Theresa B (of Nebulopathy) at 10:40 PM No comments: