First off, let me say that there aren't any fires near me yet, and I still have power, so clearly I am living the golden life here in California. The winds have been really high for the past twenty-four hours, but Frankentree (held together by a steel bolt through the trunk) still hasn't fallen down next door so obviously I have no tree prognosticating ability.

The feral cats are settling in now that they have the run of the whole house. Contrary to my expectations, they are both fine with the dogs, fine with the other cats, fine with the new Roomba, and fine with being inside. What they're not fine with is me, yet again proving that I'd make a terrible Disney princess. Gin starts growling the minute I enter any room she's in. Tonic just skitters away. I do hear them playing during the night, though, so I think they're doing okay.

The new Roomba is probably cursing its luck in being sent here, but it really does cut down on the fur tumbleweeds blowing around the place. The first time I deployed it, it had to return to its fainting couch twice to recharge before finishing. That day it also hogtied itself with sisal unraveling from a cat tree, and had an existential crisis in my bedroom, so it felt like I had just adopted another special-needs pet that needed constant monitoring. Since then it's been doing better, and only got stuck once today when it pushed the bathmat around and blocked the bathroom doorway so it couldn't leave the room.

The big dog and I have been running a few times a week. Using the track across the street has really cut down on the number of times I trip over cracks in the sidewalk, though it's probably a little boring for the dog. My average time has been dropping though I still have a long way to go before I make a 10 minute mile. Maybe I should have started training before I hit fifty. Eh, whatever.

And finally, National Novel Writing Month starts on Friday. No, I don't have all the scenes mapped out yet. I was planning on getting that done this weekend, but I've spent a bunch of time working or thinking about work. Jokes on them, though, because maybe I'll get the plot done during the work week! 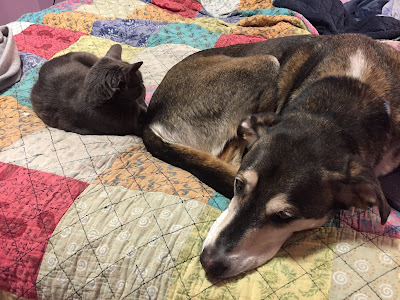 Guido and Georgie, not wanting to hang out together, but both too stubborn to move.
Posted by Theresa B (of Nebulopathy) at 6:28 PM 1 comment:

Now that it has cooled down a bit (okay, in the last week it's been 99 F for a day, then two days later we had 45 minutes of thunderhail, and there was a baby tornado, but I'm averaging it all out and calling it autumn), I'm trying to get back into running.

Running when it's dark at 6am has traditionally been a problem for me. I mean, I've tripped and banged up my knees in broad daylight, so you can imagine what I'm like when it's dark out. But I think I've solved it because now I have a headlamp and I've figured out how to get onto the track across the street, so the tripping hazards have gone way down.

I also joined an app called Charge Running, which has scheduled runs during the day. You can join a run and the live coach will guide the workout and give you feedback on how fast you're going and how far you've gone. It helps keep my workouts a little more interesting and I don't procrastinate for 45 minutes trying to figure out what to listen to.

The problem with running in a group (virtually) is that it makes it clear how slowly I run. Sure, Jeff points out that my 13 minute miles are barely faster than a walk, but there's nothing like finding out that someone else's "conversational" pace is faster than your "hard enough that you can barely go that fast for 30 seconds" pace. Not that I'm comparing or anything.

The other thing I've noticed is that I'm truly terrible at taking selfies.

I'm not sure what it says about me that it's not the running that makes me feel old, but the inability to take a picture with my phone... 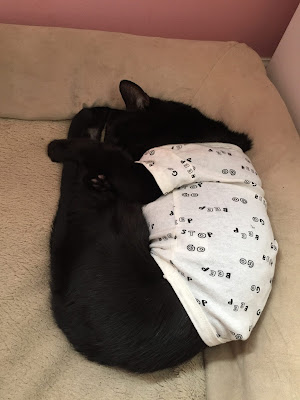 Ripley sleeps through all my workouts. He probably has the right idea.
Posted by Theresa B (of Nebulopathy) at 6:48 PM No comments: