Today, in an effort to stave off the encroaching holiday pounds, I started my new diet.

Actually, I had nothing to do with starting this diet. Or I guess I am responsible for it, but not directly.

Here's how it started:
I broke down last night and bought a frozen pizza at the grocery store, so I cooked it for lunch today. I put a couple of pieces on my plate and left the rest cooling on a cutting board on top of my stove while I ate in the living room.

When I went back to get another piece, I found one less than I thought I'd left, but... it has been known to happen that I get up to get food and then forget I'd done so. I got another piece, went back to the living room, and ate my slice while trying to figure out what the clunking sound in the hallway was. (Strange sounds in my house are always worth investigating because usually it means that either something is leaking, or the cats have gotten into something new.)

What I found was a piece of pizza in the hallway minus the cheese on the top. The clunking was coming from the crust hitting the hardwood floor as the Kittenhead chewed on it. Poor Ginger the fluffy dog was anxiously waiting in the background for her chance to get near it. (If anyone ever had any questions as to Ginger's status in the house, this should answer it.)

The food theft happened again this evening when I caught Crow the cat running back the hall with an artichoke ravioli.

So, yeah, at some point I need to figure out how to keep Crow off the stove. I'm thinking a Scat-mat is going to be her Christmas present this year.

But isn't it nice that my cats are teaming up to help me out?
Posted by Theresa B (of Nebulopathy) at 9:29 PM No comments:

It was luminary night again in Ye Olde Woodland Downtowne Historicke Centre, and our street had the best turnout we've ever had. 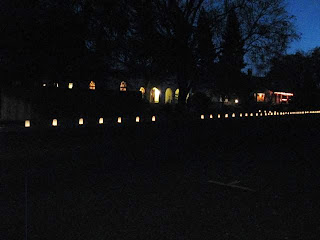 (Night photography -- not really any easier than daytime photography. I give up.)

My neighbors ordered pizza, and my other neighbors brought over cookies, and I brought nothing, and we all stood on the front lawn eating and talking and feeling the temperature drop.

Later I walked around the 'hood with two of my neighbors. They know everybody, or at least they are two degrees of separation away from everybody we met. The reason for this is that they have children. If nobody had children we could all be like me and never interact with anybody, which is an excellent lifestyle (at least until the race dies out because nobody has children).

Anyhow, I started working from home last week, and let me tell you, commuting only one day a week is an 80% improvement over commuting five days a week. (Or maybe a 400% improvement, depending on what you put in the denominator. Clearly I haven't defined something.)

Right, well, I'm off to dream about the devil himself (cough, Microsoft, cough). Have a good week!

Posted by Theresa B (of Nebulopathy) at 9:02 PM No comments:

My friend Alan just posted this picture on Facebook: 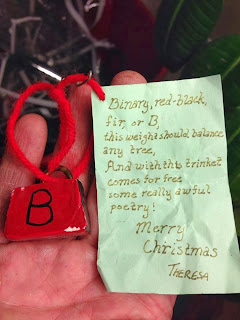 [It reads: "Binary, red-black, fir, or B, this weight should balance any tree, And with this trinket comes for free, some really awful poetry!"]


(For the non-programming people: binary trees, red-black trees, and B-trees are all data structures that one can use to hold data. It's one of those things you learn in school and then get out into the real world and realize that all you need to know is that somebody smarter than you has spent a bunch of time writing a better algorithm than you will ever be able to come up with on your own, so you should really just use the standard library since it will be faster and have fewer bugs.)

As you can see, it's an amazing Christmas tree ornament shaped like a little weight, with some amazing poetry attached.

It's been over a decade since I made this and gave it to him, and I can honestly say that it remains the only computer-programmer-themed Christmas ornament I have ever seen. (I'm not saying that there aren't more out there, but I haven't seen them...)

See, I was all Christmas-y and stuff once in my life. So there.
Posted by Theresa B (of Nebulopathy) at 9:15 PM No comments:

So here are the final NaNoWriMo 2013 totals:


Now I just have to edit the damn thing. I haven't read it over yet, but I know there are things that got dropped in the madness. There was at least one theme that was supposed to run throughout the novel that got forgotten around chapter 3. And I was walking the dog the other day when I realized that I'd forgotten about certain key elements in the last few chapters. In general, it's probably a pretty big mess as far as consistency goes, but I think I can fix all that pretty easily.

And now for the family reactions (during Thanksgiving):
Anyhow, Thanksgiving was good. I ate too much. (Surprise!) Eric has a "minimalist" approach to his house, which means that he doesn't have any furniture in the dining room, and he has absolutely nothing hanging on his walls. He also lacks a gravy boat, gravy ladle, serving dishes, a second baking sheet, wood cutting board for rolling out dough, and bar stools. I only bring this up in case anyone needs ideas on what to get him for Christmas. Or, failing that, what to bring along for him to borrow if he gets conned into hosting next Thanksgiving as well.

Even though he has very little worth stealing (at least in the kitchen), his theft-deterrent system is excellent. In order to get in through his unlocked front door, you must repeatedly throw your whole weight against the door. (He, of course, only ever enters his house through the garage...) To say that it sticks would be an understatement.

And, just like last year, his next door neighbors put a bunch (6+) of really tacky blow-up Christmas lawn ornaments in front of their house, thus ensuring that no matter what Eric does the rest of the year, he'll never be that guy in his neighborhood.
Posted by Theresa B (of Nebulopathy) at 8:53 PM No comments: