Peace has returned at last. Cleo is back home again and there were no major disasters before she left. As a bonus, Scrawny Mike found the dead possum in his backyard before Cleo had a chance to roll in it, so life is good.

It turns out that it wasn't me yelling at Cleo to leave the cats alone that taught her to scan the room for small animals when I said the word "cat". She already knew the word "cat". She also knows "squirrel". She stares up in the nearest tree if you say the latter. She also has a better sit, down, and stay than either of my dogs, which I'd like to chalk up to her higher intelligence, but is most likely due to the fact that I suck at training my dogs to do anything.

I did teach deaf Molly the hand signal for sit, but when it came time for "down", I kept getting confused and it's hard to reward consistent behavior when the request comes out as random hand flapping. Ginger already knew how to sit when she arrived. Sometimes she even stays there although she gets excited pretty easily and is prone to jumping up and licking your face if you lean over.

My lack of dog training competency is somewhat ironic considering that I taught my younger sister to sit, stay, and roll over on command when she was little. (That's a true story. What can I say? I wanted a dog.)

Anyhow, if you want your dogs to do something other than bark at the delivery truck (Ginger) or sigh in their sleep (Molly), you should probably find someone else...
Posted by Theresa B (of Nebulopathy) at 10:20 PM No comments:

Sure, she can stay for a while. No problem.

This is Cleo. She came to stay at the House of Nebulopathy for ten days while Scrawny Mike and his family were on vacation. 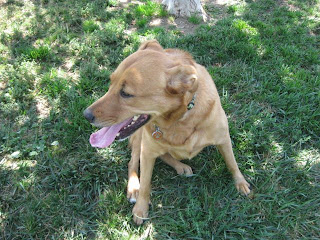 After some initial hysteria Ginger, the little dog, accepted Cleo. As usual, Molly, the ancient larger dog, doesn't give a damn. Frankly I'm not sure she's even noticed Cleo is here despite the fact that she constantly runs into her butt when we're out walking.

Cleo's a pretty nice dog in general, but she has one big problem -- she's not good with cats. That problem is multiplied by five at my house, so Cleo needs to be either 1) outside, 2) in her crate, or 3) on a very short leash next to me. I feel bad when she gets stuck in her crate for too long, and she doesn't like to be in the yard unless I'm out there, so I've been making an effort to take her and Ginger on longer, faster walks in the daytime. (Molly still gets her usual slow stroll around the neighborhood in the evening, but we ditch her at home when I'm trying to give the agile dogs some exercise.)

Naturally it's been hotter than heck in Woodland lately, and while Ginger just keeps trotting along no matter how far we go, Cleo eventually gets to the point where she flops down in some shade and won't get up. If you try to make her get up she growls and flops back down again. I actually had some old guy tell me to get off his lawn the other day. The cliche is alive and well in Woodland!

While I knew after a couple of days that Cleo would never be safe to leave unsupervised around the cats, I was hoping that at some point she would stop losing her mind every time one of them comes in the living room, if only for my neighbors' sake. But no, we're seven days in and she still barks, growls, and lunges in her crate whenever a cat comes in sight.

The cats initially were a little offended and stayed away, but they acclimated after two days and just started ignoring her. Even worse, Cleo likes to dump her food dish and fling mouthfuls of kibble around the room, then bark at Ginger as she scurries around eating it.  The cats think it's loads of fun to sit one foot away from the dog and bat pieces of kibble under the furniture while Cleo throws a tantrum next to them.

And then there's this: 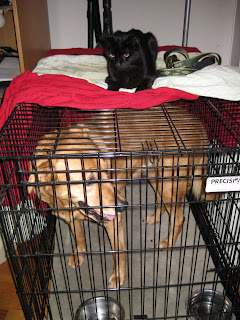 Yes, that's Ripley sitting on top of the crate. It's become the new favorite place for at least three of the cats this week.

I think I may owe my neighbors some baked goods...


Posted by Theresa B (of Nebulopathy) at 9:50 PM No comments:

I stopped drinking Diet Coke a few weeks ago, and swapped in sparkling mineral water instead. As always, I can't do things by half, so I go through almost a gallon of mineral water every day. Still, that has to be considered an improvement.

In other self-improvement news, I'm taking an online course in applied cryptography. (It's available through www.udacity.com and it's free so check it out.) I've completed the first of six chapters and here's what I've learned so far:

1) It's been a long time since I studied statistics. I never really liked statistics, but so far that hasn't been a problem.

2) If I had been the one in charge of cracking the Lorenz cypher, the Allies would not have won WWII. By intercepting one encrypted message and the almost-identical message encrypted in the same way, these people managed to figure out the structure of the whole German machine that they'd never seen and build a new machine to decrypt messages. Sometimes I can't even put all the pieces of my food processor together correctly.

So, yeah, this week I learned I'm an idiot. But at least I'm a caffeine-free idiot, so I've got that going for me. 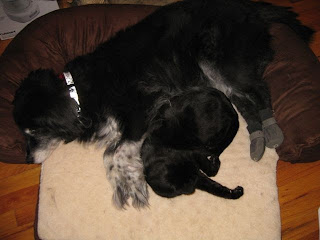