How Hard Can It Be?

On a whim I've decided to just jump right in the knitting pool and make this: https://kimharrison.files.wordpress.com/2015/06/elsa2.jpg. In case you don't want to click on a random link (I swear I'm not Rick-Rolling you!), it's a knitted blue dragon. It's very cute.

But Theresa, I hear you say, I didn't know you knew how to knit!

Well, yeah, I think I made a pot holder once. Or maybe half of a pot holder. About twenty years ago. In any case I think I can figure out how to do the basic stitches with the help of a few YouTube videos. And I know a whole bunch of people (three!) who knit very well. And really, how hard can it be?

That last sentence is meant as sarcasm. I know I'm not qualified to do this project. I'm not even qualified to finish the other half of the pot holder. But dammit, I'm going to do this. And because I expect it to be a complete disaster, I'm going to blog about it for as long as it takes until I finish my dragon-or-maybe-it-will-turn-into-a-pot-holder. My only goal is to finish something.

A large part of the problem will be me not following directions. For instance, I went to the store and got this stuff: 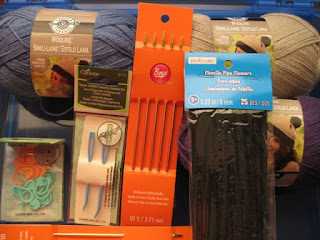 This was all based on this list: https://kimharrison.wordpress.com/2015/07/20/kim-harrisons-dragon-stuff-you-need/. However, of everything shown there, the yarn is the wrong kind, the needles are the wrong size, and the pipe cleaners are twice as big as they're supposed to be. I think the only thing that is correct is the bag of stitch markers, and apparently I could have just used safety pins if I'd had any. So I'm off to a great start. (I also got a nifty blue plastic container to hold it all for reasons named Scooter.)

Anyhow, feel free to start making fun of me now. I'll be busy trying to figure out how to cast on stitches (or whatever it's called) without hurting myself on the double ended needles. The funniest commenter over the course of this fiasco might get a unique Christmas present...

Labels: Dragon, I am an idiot, Knitting

All the Systems In One Place

In my family there are a set of traditional Christmas cookies (which probably aren't normally associated with Christmas in other families) that my mom makes every year. And they're mostly awesome, but also a lot of work, so I only get them once a year.

I decided last week to try making the chocolate bars. Now I know these are a pain to make because they require grating a bar of German chocolate, and that's difficult because it tends to melt. My mom goes through a whole process that involves freezing the blender and it's still a pain. I can't be bothered to do that, so I just bought sweet cocoa powder. Because I'm lazy that way.

(*) Original = the way I got it from my mom. She has modified it over the years based on a recipe from her mother-in-law who, I think, translated the recipe from German.

Anyhow, the first thing to notice here is that things are in both English and metric units as well as weights and volumes. That's pretty impressive for a recipe that really only has five different ingredients.

So I made the cookies pretty quickly, not having to freeze my blender and all. It's supposed to make 8 dozen and I ended up with maybe 3 dozen, so I guess I'm supposed to make them smaller next time, but honestly, who has time for that?

Then I had to bake them. The front of the card says 240 degrees for 1 hour and 15 minutes. The back of the card has all of the different things my mom has tried over the years, from modifying the baking time and temperature, to alternating the racks during baking and level of violence ("2006  Break choc into small pieces with meat hammer or the like before adding to blender").

Did I eat them anyway? Of course I did.
Posted by Theresa B (of Nebulopathy) at 10:13 PM No comments: