If you recall, I mentioned that I bought a violin to help warn people away from me during this time of isolation. I started trying to find fun music to play, which led me to bluegrass fiddle (no, I don't know anything about fiddle music or how to play it) and that led me to this tutorial:

I have slightly more patience now than I did in grade school, so I spent the ten bucks on the tutorial (well worth it, by the way -- it includes sheet music, the tutorial, and backing music at three different speeds) and I've been learning roughly one measure per day, which is exactly how I was told to learn things as a kid and completely ignored.

Anyhow, my neighbors (trapped in their home!) have been forced to listen to a bad violin player trying to learn bluegrass fiddle, and I can only assume that shortages at the grocery stores are the only reason they haven't yet egged my house.

Well, here we are and here we'll be staying for some amount of time. My county has only had a shelter in place order for the last day, but I've pretty much been in sparkling isolation (hey, as they say, it's not quarantine unless you're in the Quarantine region of France) since last Thursday.

That was a week ago. I live alone and I'm not a very social person, so this isn't all that different from my normal behavior. I have had some evening "sit around and chill" video calls with friends, but it will be another few weeks before I run into trouble.

I haven't had the mental energy to work on editing (soon!), so I've been doing other things, such as this:

(I'm Gen X. We know how to keep ourselves entertained.)

But today I got this: 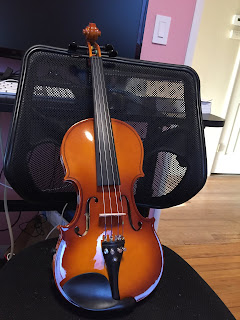 For less than $200 you can get a violin, two bows, rosin, a shoulder rest, an electronic tuner/metronome, plus an extra bridge delivered to your home. And the violin is far higher quality than the one I played during grade school. That one literally cracked lengthwise sometime around sixth grade, without noticeably affecting the sound.

Am I any good? Well... I haven't played in 37 years or so, and I wasn't all that great to begin with. So that would be a no. But I'm having fun with it because instead of trying to play something written on a page, I just put on something I listen to, like Gotye's "Somebody That I Used to Know", and try to hit notes that are in the right key. Sometimes they are, sometime they aren't. This is the stress-free way to play the violin.

Pity my poor neighbors though -- they can't hear what I'm playing along with, so all they're hearing is random notes played badly. And they can't leave!

Just Another Day At The Office

At work today, there was a raptor (don't ask me what kind -- I'm horrible at bird identifications. It was too small to be a red tailed hawk -- maybe a sharp-shinned hawk?) that was just standing in the water in the fake river that runs between the buildings. This was really abnormal behavior, and when it was briefly standing on land, it held up one foot, as if maybe it was injured.

Someone asked me (uh, former veterinarian who used to treat a lot of raptors and had techs who were excellent at bird identification so I didn't have to) about it, but of course when I went over to get a closer look, it flew up into a nearby tree.

A couple of hours later it was back in the water, so I grabbed a cardboard box on the off chance that it held still long enough for me to grab it, then made my boss (H) come outside with me so someone could pull me out of the water if I slid down the bank. His wife (S) came along because she figured if I fell in, H could pull me out while she recorded it all for posterity.

[It is important to note here that neither H nor S speak English as their native language, though they are both completely fluent. In particular, H and I had a very surreal conversation one day when I was talking about my birds and when I said "conure" (tiny, loud parrots) he thought I said "condor" (huge, endangered birds) and there was a good five minutes of disbelief on both sides before we figured it out.]


So today, the three of us walked outside to try to catch the bird --

Me (pointing to the water): There it is.

Me: *looking at her in disbelief because even I can identify a freaking duck*

Me: *whips head around to look at him because... wtf, ducks have wings too*

At this point I deployed the tact that I'm famous for and said "I'm not sure which one of you said the stupider thing."


Anyhow, when we got closer to the bird-with-wings-that-was-definitely-NOT-a-duck, it flew into another tree, so that was that. If it really is injured or sick, they're just going to have to wait until it's too weak to fly and then catch it and take it to the wildlife center.

I gave them the 30-second talk on what to avoid when grabbing a raptor ("The talons. Avoid the talons."), but honestly, if the bird's survival depends on these two, it's doomed.

1) Turns out he thought she said "dog", not "duck" which clears things up until you start to wonder why he believed she could mistake what was clearly a RAPTOR for a DOG.
Posted by Theresa B (of Nebulopathy) at 6:42 PM 2 comments: