Shake It Up, Baby!

So we had a somewhat strong earthquake last night, and even though it was centered a few counties away it was still big enough to wake me at 3:23AM which is not an easy feat.

I knew I wasn't just imagining things because the wind chimes hanging in my living room (what, isn't that where everyone hangs their wind chimes?) started chiming, and other wind chimes in the neighborhood also made sounds because other people hang theirs up outside.

After the first wave of facebook posts about how everyone felt it and nobody was hurt, newspapers started posting the standard articles about how animals sometimes act strangely before earthquakes which may be because they can sense p-waves or they have ESP or something like that. (I haven't actually read any of those articles in depth for reasons that will become obvious.)

The cats woke up and jumped off the bed about the same time I awoke, which was likely about halfway through the earthquake. The dog, on the other hand, slept through almost the entire thing, then finally woke up and ran out into the living room to bark at the wind chimes.

So... yeah, I'm not expecting any advance warning before the next one either...
Posted by Theresa B (of Nebulopathy) at 9:44 PM No comments:

The little fluffy dog and I started our agility class this week and I was amazed. Ginger was having one of her brave days and jumped through the hoop (no problem), ran through the weave poles (scary because there was a wire fence maze to keep her on the right path and she's not a fan of wire fences), and even went through the tunnel.

The tunnel part really shocked me because we tried that once before a few months ago and it was a massive failure. This time it only took a couple minutes to convince her to enter the tunnel, and even through she crept through it like she was worried a landmine would explode if she stepped on it, she did finally make it through and after a few more times she trotted through like it was no big deal.

The good news is that there is only one other dog in the class. The bad news is that the other dog is Ginger's previously-unknown mortal enemy. I knew she had a thing about pugs, but apparently shelties are on the evil creatures list as well. Luckily with two dogs and two instructors, we were able to work on different things far enough away from each other that Ginger could stop pretending we were at an MMA class and work on running through the tunnel again.

Of course, then we went to our other basic obedience class two days later and she was a total goober and wouldn't stay in one place no matter what I did. So I guess that falls into the "win-some-lose-some" category.

In other news, I moved all three yards of the mulch off my driveway (yay!), but I need about five yards more. Maybe at the end of summer...
Posted by Theresa B (of Nebulopathy) at 9:02 PM No comments:

I Have All The Dirt

So camp Nano is done and once again I managed to get all of my words in, which makes me a "winner". Granted, most of those words need to come right back out. My outline for the second book wasn't quite as specific as it should have been, so things changed along the way. Maybe it would have happened even if I'd plotted it better in advance. I will need to edit with a heavy hand (when I get around to it). 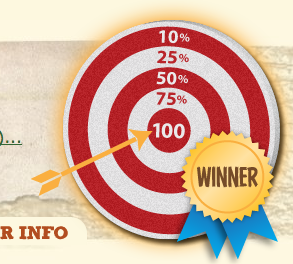 Look at my steady progress throughout the month: 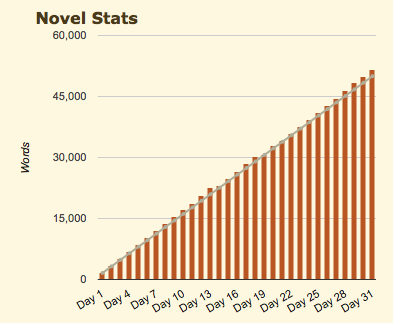 My cabin... well, we did better than the April camp. At least this time everyone in the cabin showed up a few times. 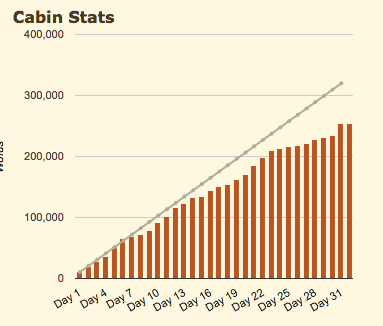 I celebrated this weekend by ordering four cubic yards of dirt and three yards of mulch. Moving four yards of dirt (approximately 100 billion loads in the wheelbarrow) around in temperatures over 100 F is not really a good idea, but I did it and it's done. The mulch is still sitting on my driveway.

My neighbors' older daughter got married over the weekend. It sounds like a good time was had by all, especially the uncle of the bride (in his mid-sixties) who took one of the other guests back to his hotel room that evening.

The little dog and I are signed up for the agility class that starts this week (unless it gets cancelled because not enough people signed up). Between Ginger's fear of new things, fear of heights, and love of growling at other dogs on leash, I suspect it will be somewhat of a disaster, at least initially. Still, it could be fun. We'll see...

Anyhow, I'm off to bed with promises to my back that I won't ask it to lift anything for at least the next five days. Have a good week!
Posted by Theresa B (of Nebulopathy) at 9:19 PM No comments: