Here are my current requirements for a movie:
It's actually a bit more complicated than that. For instance, I'm not sure there is anything that could get me to watch another Tom Cruise movie. I just can't take him seriously any more. And I won't watch anything that involves a plot that shows the viewer the same day over and over. And I don't know if it's just me, but most of the romantic comedies I've seen in the last fifteen years have left me wondering why I should be happy the couple is together in the end since they are either morons or sociopaths (or both).

All of that is to explain why I watched August: Osage Count over the weekend. It has a lot of actors that I don't hate (Meryl Streep, Julia Roberts,  Margo Martindale (of "Justified" fame), and Ewan McGregor among others), and it's listed as a comedy on iTunes.

The IMDb synopsis:
"A look at the lives of the strong-willed women of the Weston family, whose paths have diverged until a family crisis brings them back to the Oklahoma house they grew up in, and to the dysfunctional woman who raised them."

Here is what happens in this two hour movie:
Remember, this is a comedy.

In addition, Benedict Cumberbatch appears to have been taken from a Depression Era dustbowl movie and inserted into this one. He's incredibly out of place and every scene he's in is just awful. I can't even figure out what the problem is, but it's really bad.

I stopped the movie with thirty minutes left and went to take a nap. I don't know why I bothered to finish it later, but I did.

At the very end, Daughter #1 has some sort of epiphany, which we know because she pulls her truck over to the side of the road, gets out, and stares at the skyline for a few seconds before getting back in her truck and driving off again. Unfortunately, I have no idea what the epiphany was supposed to be. Possibly it had something to do with making sure she read the script before agreeing to do another movie.

So, yeah. My new rule about movies is that I won't see anything that started out as a play. (Now that I think about it, that would have saved me from Mama Mia! as well.)

I think it will be a good rule.
Posted by Theresa B (of Nebulopathy) at 9:11 PM No comments:

Good Help Is Hard To Find

It's been busy at work lately, and the new director wants to start doing a whole bunch of new stuff, so they opened a job position for another programmer. In theory, that's a good thing, because there would be someone to take up part of the load and bounce ideas off of.
In practice, it will probably be a huge waste of time because finding a qualified programmer is nearly impossible. I don't know if it's the location (far enough away from most other tech jobs that it's a longer commute), the pay, the absurd hiring/searching process, the drug screening, or just actually a lack of qualified people looking for jobs, but in any case I'm not holding my breath waiting for someone to help.
In the meantime, we have an intern. And not a newly-graduated-from-college intern or even a will-graduate-from-college-in-two-years intern, but a high school intern.
I don't know what genius thought up this program, but... Let's just say that coming up with something for this guy to do is harder than most of the things I do on a daily basis. He started on Monday, and my boss was on vacation all last week. I spent about an hour explaining the twenty minute task that we had come up with, and thankfully that took him over a day. I feel kind of bad for not finding something else for him to do for the rest of the week, but let's recap here: I'm a contractor, I don't work in the office four days out of five, and I have no desire to manage people. This is not my problem.
So basically, if the point of having high school interns was to encourage kids to go into engineering, I'm pretty sure this will backfire. On the other hand, it's probably a realistic view into life at a big company. So maybe this poor kid will be convinced to do something more productive.
Posted by Theresa B (of Nebulopathy) at 8:23 PM No comments:

Worth At Least Four Thousand Words

As promised, pictures of the new fence. This is the view from the alley looking toward my house. I left the gate open. Not only will I be able to get into my garage from the alley, I can also get into my back yard. And my neighbors can come over and pull weeds if they are so inclined. 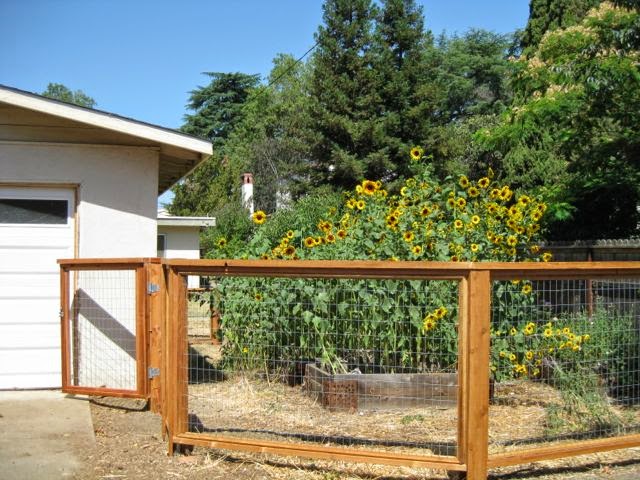 This is the view from amidst the sunflowers. I've gotten more compliments on those things in the last two weeks than I have for anything else I've grown. I've also done exactly nothing to get them to grow. I didn't plant them and I don't water them. The bees that live in my neighbors' wall really love them, though, so I'm glad they grew. 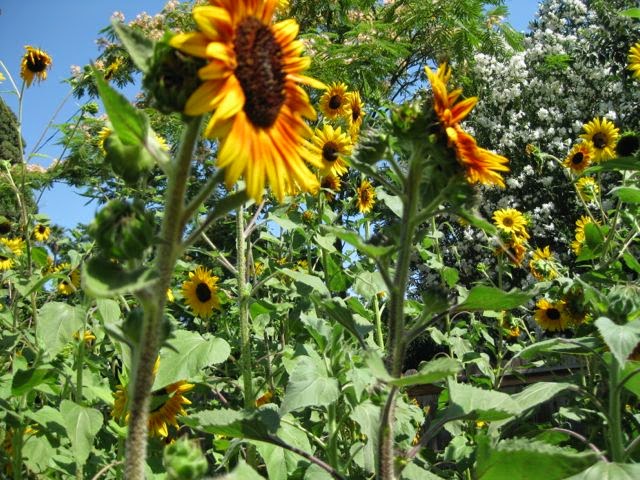 I couldn't decide which of the next two pictures I like better. (I'm leaning toward the top one.) Probably anyone who knows anything about photography would be able to take a better shot of the exact same thing, but they haven't, so I did. 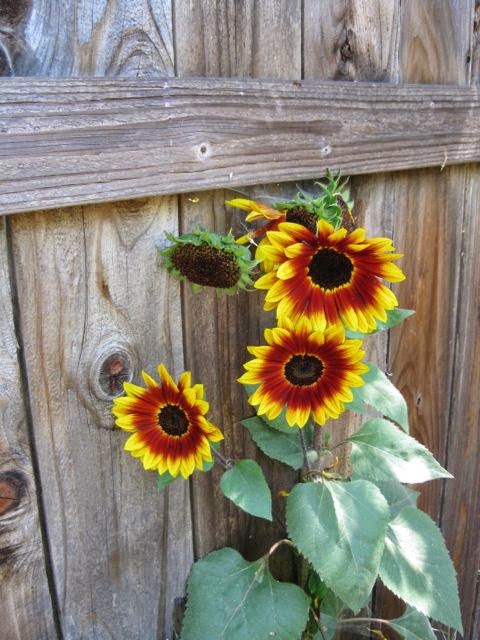 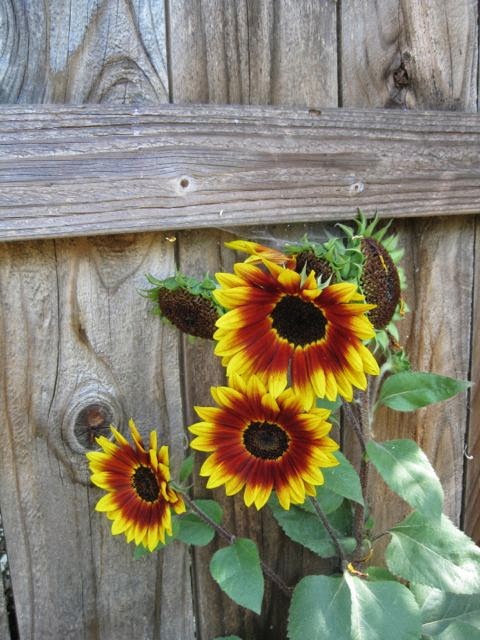 In other news, it's 109 degrees F in Woodland today, and my air conditioning isn't working. Might be time to slowly stroll around the grocery store for a few hours.
Posted by Theresa B (of Nebulopathy) at 12:02 PM No comments:

Still Fencing After All These Years

Now the other, smaller, fence separating the garden from the yard is being redone. I have filled the green waste bin up to the top, and yet still had to take the little dog in to have three foxtails extracted from her ears this week. That's what I get for letting my weeds grow so well.

Today I made pumpkin pie, except that they didn't have any pureed pumpkin at the store, so I used sweet potatoes instead. It's... interesting. It would probably be better with a little of the sugar I left out. Still, it's not terrible, so that's something. (The bar is rather low when it comes to cooking.)

I also made a Greek potato-vegetable casserole, with dill and parsley. Thankfully that one tasted better than it smelled going into the oven because that's going to be six meals this week. Disasters in cooking are fine when I only have to eat them once, but six times and I'd have to give up and call Domino's.

At some point there really will be pictures of the fence...
Posted by Theresa B (of Nebulopathy) at 8:42 PM No comments: