There Can Be Only One

I swear I've been making jokes about this for the last five years, but it's starting to look like Effing Scooter, the cat who pees on everything, is going to be the last of my vet school bottle babies to survive.

Guido has been in remission for almost a year now, but I can't imagine that's going to last forever.

This week Ripley, my little dog in a cat suit, started acting funny. He's had what I assume is IBD for a while, and though his symptoms have been pretty well controlled through a special diet for the past year, it's only a matter of time before that explodes into full-blown GI lymphoma. So that's what I was expecting when I took him in on Thursday morning.

But since Ripley also occasionally eats plastic things, we decided to take an x-ray to see what was going on.

And there on the edge of the film was a mass in his lung.

So then we went off to UC Davis to find out what was going on. Let me tell you, it's pretty weird to go back to the teaching hospital you graduated from ten years later as a client. Parts of the hospital have changed, and the largest part of the parking lot now has a building on it, but the exam rooms still have the same pale green tile on the walls that probably already looked dated in the 1970s. Nothing like a few flashbacks to really make your day.

Basically all the parts of his body seem to be competing for the title.

One of these things could be making him feel bad, but maybe it's something else entirely. And he might be able to live with all those things for a year or two without any of them impacting his quality of life.

Anyhow, he spent a night in the hospital (and developed a heart murmur and a weird rhythm that also got checked out) and he's feeling better. He's getting antibiotics. If he continues to do well over the next week, he's going to have surgery to remove the lung mass. After that he can go on steroids for his IBD/lymphoma as needed. Or he might crash and burn. Only time will tell.

For now he's back to following me around and keeping me company. 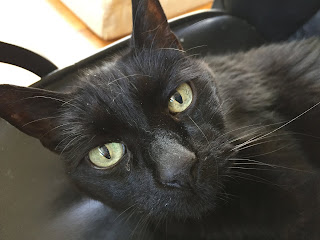 When the apocalypse happens I'm pretty sure the survivors are going to be me, Effing Scooter, and the screaming conures.
Posted by Theresa B (of Nebulopathy) at 7:56 PM 2 comments:

Welcome to the Hall of Judgment

I still have two feral cats in my bathroom. Every evening I bring my laptop in and sit on the floor and either work or watch a show while I try to get them to maybe consider that the person who brings them food and fresh towels is not as evil as they think. Mostly the only thing that happens is that my butt gets sore from sitting on the hard floor, but I have been able to reach over and slowly touch both of them a few times. They weren't exactly happy about it, but they put up with it.

While baby Tonic will often look at different things, generally I get two hours of Bathtub Gin giving me the most judgmental stare in the universe. 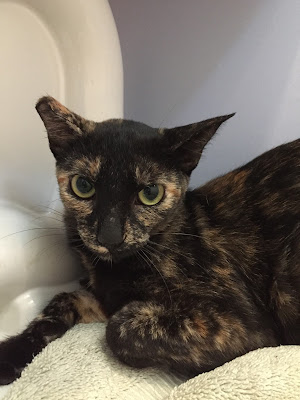 Is that scene really good enough? Really? Are you sure?

Yesterday I sat in there and watched some art detectives show. (Was the random ugly painting on slats of wood done by some famous Flemish painter I'd never heard of? I keep trying to imbibe culture but honestly I'd rather put a picture of dogs playing poker on my wall.) After an hour I'd bored them both to sleep. I think that's a good thing since it means they aren't completely freaked out by me. I decided I'd had enough culture and turned off the show and now I'll never know if the ugly painting was an expensive ugly painting or not.

In other news, I just found out that the Hubbard squash I have growing in the garden is supposed to be about twenty pounds when fully grown. 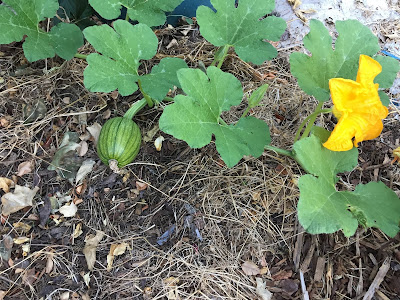 The squash that may take over the world

I may not need to leave my house for a while after that thing is done.
Posted by Theresa B (of Nebulopathy) at 7:25 PM 2 comments:

Sunday evening I chased baby Tonic around until he jumped in the bathtub and I was able to close the doors to keep him in there with access to food. Then I primed the trap in the bathroom with some yummy wet food and went to bed.

The trap was still empty when I got up the next morning. Of course. So then I chased Gin around until, with a combination of luck, persistence, a towel, and some long-handled silicon-covered tongs, I was able to nudge her into a carrier and close the door.

Only one of us peed on herself in terror during this escapade, so I count it as a win.

So Gin went off to the hospital to get spayed and vaccinated/tested/flea treated/ear clipped/etc. It seems a little mean to do all that stuff at one time, but it may be the only chance we have to get it done. She doesn't really seem to be settling in to life as an inside cat.

When the vet tech called to let me know when she'd be ready to be picked up, we talked about how she seems pretty darn feral. Then, in the next sentence, he said they were sending her home with three days of oral pain medications. I'm pretty sure he could hear my eyebrows hitting my hairline over the phone. 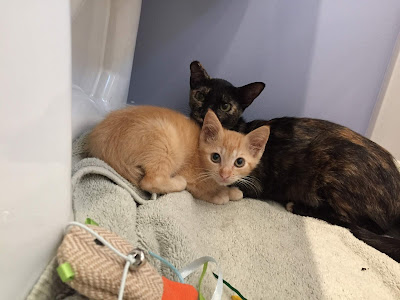 Once back home I left baby Tonic in the tub and Gin in the rest of the bathroom. I thought I might be able to hide the meds in her food as long as I didn't have to worry about the kitten eating it. Once Tonic saw Gin, though, he started crying. I left the bathroom and about twenty minutes later he stopped crying.

When I went back into the bathroom, Gin, the cat who had major abdominal surgery just hours before, had jumped over the 6' glass doors to get into the tub, and then jumped 5 feet up onto the window ledge where she was trying to push the window open far enough to get through.

We had a chat about post-op resting, I closed the window completely, and opened the tub doors so she wouldn't be tempted to do it again. It means I can't give her the meds, but better that than the wall-climbing workouts she was doing.

Anyhow, the plan is to keep her indoors for at least another nine days so everything has a chance to heal. After that she may need to go back outside again. Tonic may be on the same plan -- we'll see how things go!

Posted by Theresa B (of Nebulopathy) at 7:22 PM No comments: 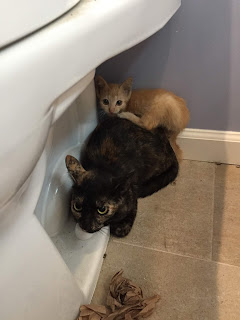 Now there are two feral cats in the bathroom. The new kitten, whose name is Tonic, has not yet learned to be stealthy. (I assume he's a boy, but I don't really know yet because I can't get within 5 feet of him.) When I walk in the room, he runs straight at me and then turns sharply to go into the cardboard box, instead of just staying hidden where he was.

Meanwhile, his mother Gin has been growling less lately. All I have to do is figure out how to get her into the cat carrier on Monday so she can go get spayed.
Posted by Theresa B (of Nebulopathy) at 7:14 PM 3 comments:

Periodically new cats show up outside my house. Most of the time they're owned and taken care of (which, in my definition, includes feeding, vaccinating, and spaying/neutering as a bare minimum) but they like to hang out in my yard. But every once in a while, new cats show up that aren't being taken care of.

So... yeah, I saw a kitten last week that looked old enough to manage on its own even though I saw it nurse a bit. I had thought the mother cat was fixed because the people at the end of the street have been feeding her, but apparently not.

Out came the trap. First I trapped a larger orange cat. There's a 75% chance that an orange cat is male, and he didn't look pregnant, so I let him go.

Next I caught the mama cat, who is probably not more than six months old. I thought she wasn't really feral because she hangs out five feet away from me when I'm gardening, so I dumped her in my (empty) bathtub to wait for her spay appointment. 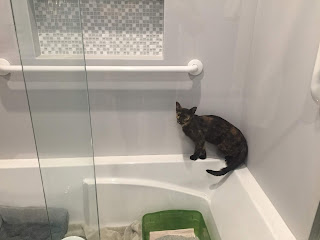 (Before she trashed the tub)

That assumption about her not being feral might not have been a good one.

Her new name is Bathtub Gin (or Ginnie, for short) and I have until Monday morning to figure out how I'm going to get her into a carrier for the ride to the vet. 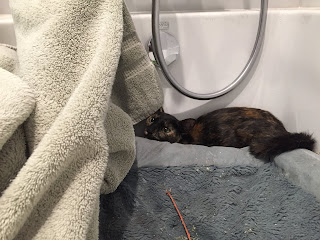 Then I set the trap out to catch her kitten. I got the larger orange cat again. I let him out in the morning, then set the trap up again in the evening. Come morning I found the damn orange cat again. He was clearly irritated that it took me so long to let him out. Next day, same result, although this time the little kitten (whose name obviously needs to be Tonic, right?) was hanging out nearby and ran off when I approached to let the big idiot out of the trap.

Anyhow, I'm not really sure what I did wrong in my life, but I'm 50 years old and have a bathtub full of Gin...
Posted by Theresa B (of Nebulopathy) at 6:46 PM No comments:

I've given up on memorizing this, so I just painted it on the wall in my office. 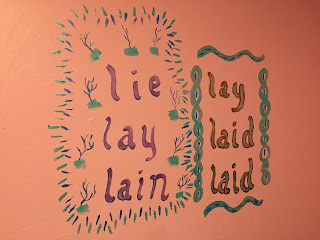 Maybe this will cut down on the number of notes littered throughout my manuscripts that say things like "why don't you know the past tense of lie yet?", but probably not.
Posted by Theresa B (of Nebulopathy) at 8:19 PM No comments: