Best thing about technology: I no longer have to go to the store to shop for clothes. I can buy everything I need online and have it shipped to my door. This is important because I suffer from store-induced narcolepsy, a serious condition that causes me to get sleepy the minute I walk into a mall. It's possible that there really isn't any oxygen in a mall because it's been displaced by the carbon dioxide used to whisk the Cinnabun smell all over the place. Anyhow, I hate shopping, so the web is a wonderful thing.

However, I've noticed that there's a little inconsistency in clothing sizes, even within the same brand and style. I recently purchased three pairs of jeans, in a smaller size than I previously needed. All three were supposed to be the same style, manufacturer, and size. All three came in one package.

The three pairs of jeans came from three different countries. One pair (Egypt) was slightly larger than the next larger size. The other two were roughly the same size, but not really exactly the same.

Shouldn't this be something that's pretty exact? I would think that they would be working off of some sort of pattern, not just eyeballing the measurements.

Oh well. This way I can always find something that fits me poorly. Just the way I like it.

There may be no quality without metrics, but I'm not sure there's a whole lot either way...
Posted by Theresa B (of Nebulopathy) at 10:48 PM No comments:

Top ten reasons I should have been born as a guy:
I think I missed school the day all this stuff was explained...
Posted by Theresa B (of Nebulopathy) at 9:28 PM 7 comments:

How To Win Friends And Influence People

I worked from home today. It was great. I didn't feel the need to rush home, and I could work on my drinking habit a whole hour earlier in the day. Win-win as far as I'm concerned.

The only disturbing part of my day was my quick trip to the Hollywood market, home of the Slushee machine that's had an "Out of order" sign on it for eight years.

Granted, today I went and bought a box of Good & Plenty, because... well, why not? Licorice goodness, crunchy outer coating, and I must have burned at least ten calories walking down the street.

Okay, sure, I used to buy a 20 oz bottle of Diet Coke there every morning on my way in to work. And now I buy my Diet Coke at the grocery store. So I still had some at home.

But still... did she need to greet my purchase with "No more skinny?"
Posted by Theresa B (of Nebulopathy) at 10:27 PM 3 comments:

I'll Drink To That

Due to circumstances beyond my control, I've decided to take up drinking. Mind you, I expect this to be a fairly temporary thing, and I figure drinking is cheaper, more convenient, and probably much more effective than therapy, so why not?

Anyhow, my career as an alcoholic is being thwarted by my lack of ability to drink most alcohol. Let's face it -- beer is just gross, mixed drinks have way to many calories, and hard alcohol burns my sinuses. That leaves me with one brand of cider that isn't sickly sweet. And naturally, Blackthorn is imported and nobody seems to reliably carry it.

How am I supposed to develop my vices?
Posted by Theresa B (of Nebulopathy) at 8:40 PM 2 comments:

Today I got email from the IRS that started like this:


Congratulations, the IRS has accepted your federal return.


There are a couple of things we can deduce from this:

First, this means that I filed my taxes. Not only did I file them, I filed them with twenty-two hours to spare, which is a new record for me. Next year I might go all out and file on the 14th.

Second, it means that I'm too cheap to buy tax software. The federal forms for online filing are clunky and confusing and remind me of something that I might have worked on. (That made me laugh at 2am when I first thought of it.)

And finally... what's up with the "Dear Free File Taxpayer: #2"? Despite the hordes of procrastinators out there, I know I wasn't the second person in the US to file my federal taxes, so it's not like it's a counter. And I've only filed once this year (as is proper). So, is this their subtle way of telling me I'm a piece of doodoo? Going with the "I could have written this software" theory, I'm guessing that it's a debug statement that was accidentally left in.

Now I'm just waiting for the IRS computers to start sending me mail once a minute for the next 48 hours. Then I'll be sure the software is something I might have been involved with...
Posted by Theresa B (of Nebulopathy) at 10:35 PM 2 comments:

I need to do that soon, but while I'm waiting...

Hi, my name is Theresa and I'm a procrastinator.

(This is your cue to say "Hi Theresa". What, you never went to any 12 step meetings? Never saw one on television? Oh please, do you live in a cave? Even I know the 12 step drill and I pretty much do live in a cave, so you have no excuse.)

I haven't been to confession in ... oops, accidentally switched scripts there. But speaking of that, what did they think my nine year old self could possibly have done that required confession? Hitting my brothers? They almost certainly deserved it. The priests must have wanted to kill themselves when they saw an entire class of kids lined up.

But back to the point at hand. I've always procrastinated. It's just the way I am. But what I have found to be helpful as I've grown older and wiser (or at least older), is to carefully plan my procrastination so that I can get other things done.

Take this weekend, for instance. This weekend I didn't do my taxes. They're due in four days. At midnight. If there's a network outage after 10pm on April 15th, I'm screwed. The smart, responsible thing would have been to fill out the forms this weekend. Or even back in January. But that's not the procrastinator's way.

However, while I wasn't doing my taxes, I did manage to:
That's pretty much it. But that's a lot more that I would have gotten done if I hadn't been procrastinating. So there.
Posted by Theresa B (of Nebulopathy) at 9:44 PM 6 comments:

I decided to try something new from the vending machine this week.

Note the snack name. Note the pictures on the front. 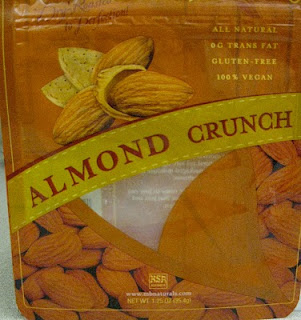 Now note the ingredients on the back. 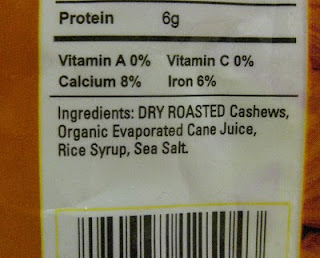 Sometimes you have to wonder...
Posted by Theresa B (of Nebulopathy) at 11:01 PM 4 comments:

I bought my dog a new bed today. The old bed wasn't washable, and it really needed to be washed. Who makes furniture for dogs that can't be washed? I don't understand.

My choices in washable or waterproof big dog size beds were: camouflage (pink and grey) and camouflage (green and beige). I refuse to bring pink into the house, so my dog now has a bed that would blend into the jungles of Vietnam. When I got it home I realized that it actually has a US Army patch and the tag says it's an officially licensed product.

I have nothing against the Army. In fact, I'm all for any institution that takes 18 year old boys and sends them out of the country for a while. It would be nice if they were doing something a little less violent, but we can't have everything.

My problem is that the US Army would never take my dog. She can't run, she can just barely do one push-up, she's completely blind (having no eyes and all), and we won't even go into that one time at the dog park when she started humping that other female dog. She's probably part German Shepherd, but that's the only thing she'd have going for her.

So... it seems a little mean to give her a bed that flaunts what she can't have. Not that she would ever know, because she can't read (having no eyes and all).

Still, you would think the hardware store would be a little more sensitive about the disabled.
Posted by Theresa B (of Nebulopathy) at 9:14 PM 2 comments:

April is the Cruelest Month

Apparently it has become April, and we all know what that means. Yes, it means that in fourteen days I will be trying to find my W2.

I don't really mind paying taxes. I use the roads. I consume goods that are shipped on the roads. I like the fact that there is some kind of societal safety net. I don't particularly appreciate paying for other people's brats to go to school, but I do realize that it's better than the alternative (which is having them not be in school and hence vandalizing my house). Unfortunately, the IRS doesn't count my animals as dependents, but whatever.

It's not the money. It's those darn forms. Every year I fill out my tax forms with the assumption that if I don't know what something is, I can't possibly be responsible for that part. Capital gains? I don't know what it is, therefore I get to put zero on that line. Minimum alternative tax? Again, no clue, so I don't fill out that form. Most of the time the IRS agrees with me, although there was one year they sent me a bill for $47,000 which was about $46,500 more than I had. That year I was supposed to have read things a little more closely.

So yeah, expect me to be frantically cleaning my house in about two weeks, trying to find my tax documents under three months of mail.

In other news, I got an email from K-poo yesterday asking if she could borrow my cat for business purposes. This proves that cats are worth something, because nobody would want to borrow something worthless.

I wonder if I can write off the animals as business expenses...
Posted by Theresa B (of Nebulopathy) at 11:24 PM 2 comments: