I bought some Meyer lemon marmalade and it was great. However, I had a little problem getting the lid off. 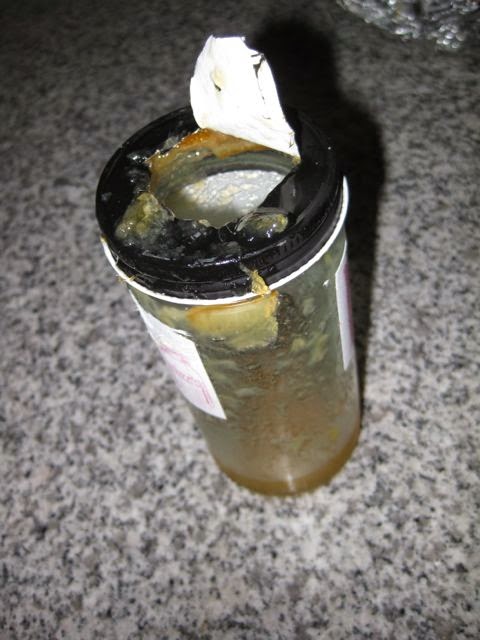 Even after the seal was broken I couldn't twist it. I don't know what kind of circus strongmen they have tightening the lids at this company, but they need to calm down on the steroids.
Posted by Theresa B (of Nebulopathy) at 9:28 PM No comments:

The little fluffy dog and I have officially moved on to the advanced beginners agility class, which is so advanced that we sometimes attempt to run a course of up to ten obstacles. (We actually have come quite a long ways -- I'd forgotten what the first class was like until I saw the new beginners trying to get their dogs to enter the weave pole maze. It's not an issue now, but watching the dogs back out and do everything to avoid it the first time brought back memories.)

Our difficulties in agility come from two sources: the dog and me. Ginger's attention span occasionally means that I'm left calling her like an idiot while she's sniffing the ground and wandering in the opposite direction. And she gets so excited about some of the obstacles that she skips anything in-between.

But what is increasingly becoming the larger problem is my inability to remember where I'm supposed to send her next. This seems simple until I'm sighing in relief that she actually went through the tunnel and then she pops out the other side and I'm suddenly supposed to be directing her somewhere, but is it over the red jump to the left, or through the weave poles to the right, or over the dog walk in the middle? (Trick question -- it's always over the dog walk according to Ginger because that's one of her favorite obstacles.)

So don't expect to see us in any competition any time soon. Or ever, really, since I don't really have any desire to compete.

I'm just waiting for Ginger to realize that she's jumping over obstacles that are higher than the fence blocking her from the cats' litter boxes. This agility thing may turn out to have been a bad idea...
Posted by Theresa B (of Nebulopathy) at 9:35 PM No comments:

Yes, I am a Cat Person

The little dog continues to excel at agility, if by excel I mean rolling on her back in front of the tunnel entrance. Despite that snag, she's doing pretty well. I was having a hard time getting her to keep on the mini-course last week because she wanted to keep going over the A-frame. Having her run off course because she's so excited about a different obstacle is not the worst problem to have. At least she's having fun.

Getting her back in the car after class is done is about like trying to get a little kid to get in the car after a trip to the park. (And as someone who threw a two-hour tantrum about such a thing as a three year old, I know whereof I speak...)

She's currently sulking in her crate because I gave her a bath earlier today (for the same reason she's had the last five baths). I keep hoping that at some point she'll make the connection between rolling in smelly stuff and having to endure a bath, but I don't think it's going to happen.

Right after I finished rinsing her off, she ran over to the fresh dirt and rolled around in it. Then she was upset I wouldn't let her muddy self back in the house until she dried off.

Somehow the cats don't have this problem. And they could probably learn to do agility if I found the right treats to motivate them.
Posted by Theresa B (of Nebulopathy) at 9:28 PM No comments: