Eight weeks ago I started training for a 5k using the "Zombies, Run!" app and yesterday I completed the final workout. I'm not sure I cover five km during my runs. Heck, I'm not even sure what I'm doing qualifies as running. But in any case, I'm in better shape now than I was then, so that's something.

I'm not really ready for the public humiliation that would ensue by running in an actual 5k race. We'll see. In the meantime, I've downloaded the "Zombies, Run!" non-training app. In this one you just go on missions to get stuff.

I need to create better music playlists, though, because there's nothing like a slow song to really make those minutes crawl. Also, during this last run I had promised myself that I would stop and walk at the end of the next song, and then Golden Earring's "Twilight Zone" came on. And went on. And on. I had made it to the other side of the circuit I travel before I remembered that I own the extended remix version and time really hadn't come to a complete stop.

Perhaps I should try books on tape...
Posted by Theresa B (of Nebulopathy) at 8:13 PM No comments:

The cats are evolving... 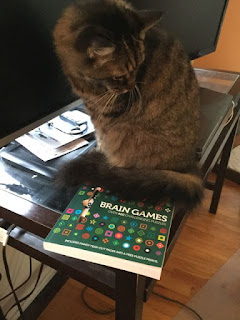 Posted by Theresa B (of Nebulopathy) at 9:27 PM No comments:

It started about a week ago -- I was "running" on the track across the street and a flock of wild turkeys, probably about ten of them, jumped over the chain-link fence from the community gardens next door and huddled in the middle of the track.

I wasn't about to be intimidated by a bunch of turkeys (It sets a bad precedent -- what's next? possums? butterflies?) so I kept running toward them. It quickly turned into a scene from a western, complete with whistling, or rather wheezing since I can't really run long yet, with both of us eyeing each other and waiting for the other to make a move.

Finally, at the very last minute, the turkeys ran off the track. I won. I would have run a victory lap, but I had to slow down to a walk because I was starting to see black spots in front of my vision from lack of oxygen.

Anyhow, I thought that was the end of it until they showed up on my front lawn a few days later. I thought about going outside and showing them who was boss again, but I decided to take the moral high ground and just ignore them. Besides, my neighbors already think I'm weird.

But they won't leave it alone. I was hearing strange noises in the house Friday afternoon and there came a point when I could no longer chalk it up to the cats "playing" with each other. It sounded like they were running around in the new shower and colliding with the walls. So I went back the hall to yell at them in person and realized that something was on the roof. In fact, many heavy somethings were on the roof, running back and forth.

I had just decided to go outside to find out what was going on when the first turkey glided down from the roof and landed on my back lawn. We stared at each other through the window while the rest of the flock came down to join him.

The last I saw of them they were trying to pick the lock to get into the garage. I carefully closed the curtains and went to the other side of the house.

Damn turkeys.
Posted by Theresa B (of Nebulopathy) at 8:59 PM No comments: