A couple months back, I finally gave in to AT&T's begging, and let them install fiber. (The monthly fee is lower, they gave me a gift card, and it's faster — I assume they're trying to get rid of the copper lines.)

So that was all good. I don't really need the higher speeds, but the new line doesn't run under the house, so it's less likely to be eaten by squirrels/rats, which is a thing I've had problems with in the past.

Two weeks later, the city was tearing up part of the street and directing all the traffic next to the sidewalk. Important things to note:

1. The street is higher in the middle than it is on the edges, so the vehicles tilted slightly toward the sidewalk as they drove by, and

2. There's a telephone pole in front of my house seated right on the edge of the sidewalk. It is attached to a heavy cable running to the building across the street, and over the years, the pole has gradually bent toward the street. I once knocked off my side mirror when pulling into a spot in front of my house.

So a recycling truck drove down the edge of the street, snagged the pole, and scooped it up onto the truck before it could stop. 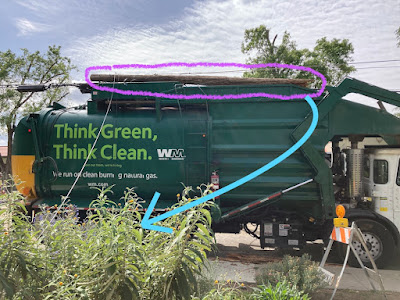 The good news is that nobody was hurt and that particular pole doesn't carry electricity. The bad news is it yoinked the fiber right out of my house.

They freed the recycling truck in about an hour, and replaced the pole that night. (Yes, jackhammering at midnight is great!) Two days later, AT&T came back to reconnect my fiber.

And yes, they put the pole in the exact same spot so it can happen again.