One of the contractors working on the project is leaving soon and sent out a good-bye message today. Here is what it says, in part:

"Dear All,
I want to bid farewell to you all and inform you that I am leaving my position at []. Tomorrow is my last day at work. I have enjoyed working for this company and I appreciate having had this wonderful opportunity to work with you all."

Pretty standard stuff, right? Except that it actually does say "inform you that I am leaving my position at []." I didn't redact that.

The person who's leaving seems like a nice enough guy, so I couldn't really send the following:

"Dear [],
We appreciate all your hard work during your time here. Good luck in your future endeavors and keep in touch!"

Have You Seen This Computer?

Remember the news story about the garden gnome that was traveling the world? It was stolen out of someone's garden (in England, I think) and then the owners kept getting pictures of the gnome posed in various locations around the world.

Well, after re-installing the operating system on my Mac for the third time because the internal drive keeps getting corrupted, I ordered a new one online. (I've re-installed the OS twice since then, as well.) I love my Mac, but in computer years, my Mac is like that 114 year old man who just died. And apparently it has Alzheimers.

Naturally the new computer arrived at work on Friday when I wasn't there. Despite the office being a locked and "guarded" building, multiple thefts have occurred in recent months, so I sent Rvan mail and asked him to lock it up someplace.

First he sent me mail apologizing for getting fingerprints on the screen.

A few hours later he casually mentioned that it boots quickly.

I'm beginning to think I should put its picture on a milk carton.
Posted by Theresa B (of Nebulopathy) at 8:09 PM No comments:

Artist of the Ephemeral

Today I'm celebrating the ephemeral nature of things.
I did my taxes -- the money comes in, it goes out, and I expect to hear from the IRS in the next two months with corrections to everything I did wrong on my forms. (It's pretty much a yearly event. I feel like we're on a first name basis.) I can't decide if this is the earliest I've ever filed my taxes (more than 24 hours ahead of the deadline!) or one of the latest times I've filed my taxes (since the deadline is three days later this year).
Ginger was completely freaked out by a group of churchgoers waving large palm fronds as we walked down Main Street. Since I thought it was Easter, it kind of freaked me out, too. However, this explains why when I saw a smallish child carefully looking in the flower beds of a front lawn and I asked him if he was looking for eggs he answered with a scornful "No!". (He was looking for sweet peas that he had planted, or something like that. We both quickly got bored with the conversation and wandered in our different directions.)
And for the second time in six months I had to erase the internal drive on my Mac and re-install the operating system. I'm thinking that suggests that there is actually a real hardware problem. Also, it means that everything I've added to the internal drive in the last six months is gone. But... I haven't put anything on the internal drive in the last six months that I care about, with the exception of links to blogs that I used to read and had just started to reassemble in the last few weeks, and I can probably get most of those back from memory.
So there we have it. Things come, they go, and life goes on.
Posted by Theresa B (of Nebulopathy) at 10:07 PM No comments:

Because, Really, Why Wouldn't It Sell This?

From the window of the "Seemingly-Always-Closed-But-Actually-Still-In-Business" used bookstore that I pass every morning: 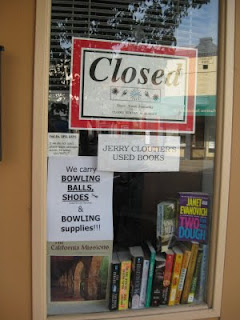 It's a smattering of random paperbacks, and this: 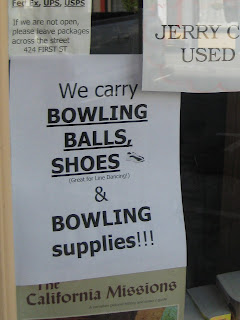 Because what used bookstore doesn't carry bowling supplies? And how great is the tiny "Great for Line Dancing" remark under the shoes line?

I love Woodland.
Posted by Theresa B (of Nebulopathy) at 10:41 PM 2 comments:

My Kingdom For A Cat Porch

The other sign of spring (in the "prophetic reading of entrails" sort of sense) is that I once again try to make the cat porch cat-proof.

This sounds like such a simple thing, but it's really not. I have to laugh at the initial assumption that regular screen mesh stapled to a 1x2 would contain the Houdini-with-daggers that is Guido. And if he's not trying to break out, his sister Crow is using her considerable heft to try to assist entropy in any way possible.

Last fall I tried to roof the porch with an oilcloth tarp. Aside from some brief moments when I thought it was going to bring down the entire structure, it worked well. Until it rained two weeks later. Nothing in the construction of the cat porch was rated to hold fifteen gallons of water. (I attempted to attach it in such a way that the water would run off, but my attempt was a complete failure.) Finally the tarp completely ripped off and it stayed that way all winter.

This year I went with a modification -- a sun screen. It's light-weight and "guaranteed" (says so on the bag so it must be true) to let water get through. And one of the accessories was a bag of clamps that could be pounded into wood to hold it on.

Unfortunately this meant getting on the top step of the step-stool with a hammer. Given my fear of heights and my general lack of coordination, this went about as well as it possibly could, by which I mean at least the emergency services didn't need to make an appearance.

So there we have it. Spring has officially sprung. And if Guido makes it onto the roof again, he's on his own.
Posted by Theresa B (of Nebulopathy) at 9:17 PM No comments:

This time, as I continue my journey learning about responsible car ownership, I decided to try something new and replace the tires before I could feel the car bouncing around at higher speeds. (Did you know that often the tire will bulge out in a random spot as it gets worn down? It's true, and it's not like it didn't have any tread left.)

Since my usual method is to have the dealership change them when they call me up and tell me my tires are all about to blow out, I had to figure out where to go. There are at least four tire shops within three miles of my house. Who knew?

Naturally I was forced to make a decision about which tires to get. Despite my well-known cheapness, I bought the more expensive tires. Yeah, they're "performance" tires, which I guess might make a difference if I go a little too fast around a curve or get cut off by someone. More importantly, they're quieter than my old tires, so I don't have to crank the stereo up quite as high when I hit the freeway.

Of course, they're so much more quiet than the old tires that I found myself accidentally driving twenty miles per hour over the speed limit, wondering why my car was handling differently. Gusty crosswinds at 85 mph -- it's a good thing I had performance tires.

If anyone cares, they can go out and look at the tires and read the label (like Rvan did). Here is what I know: they have tread and they come in black.

Whatever.
Posted by Theresa B (of Nebulopathy) at 9:48 PM 3 comments:

The Mound of Dirt That Ate My Driveway

Look at all the foxtails just waiting to dry out and be snorted up by my dogs... 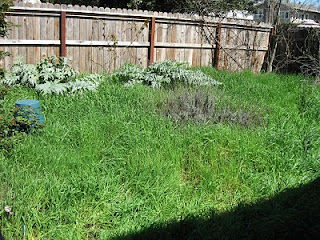 Thursday morning, bright and early, the compost and shredded bark was delivered. I'll give the guy credit -- he managed to back a dump truck through my gate with about two inches on either side. I can't even back my Civic through that gate, although that says more about my backing skills than anything else. Anyhow, after he managed to fit the compost on the driveway and the bark mostly on the driveway and partially in the alley, he stood around for a while which made me wonder -- are you supposed to tip the dump truck driver? I mean, there was a delivery fee, after all. I hate this whole tipping thing. If he really was waiting for a tip, he eventually gave up and drove away.

Then I went to the lumber store. In case you're wondering how much you can fit in a Civic (with all the doors, windows, and trunk closed), the answer is: twenty-four six-foot 2x6" boards, plus another twenty-four three-foot 2x6" boards. And I still had room to sit in the car comfortably. It does, however, drive a little differently when loaded like that. 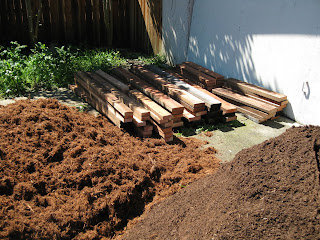 After unloading all the lumber and getting most of the shredded bark out of the alley, it was time to take a nap. Or it should have been. But I knew if I started down that road I'd still have a pile of compost sitting on the driveway at the end of summer. Also, I couldn't close the gate because a mound of compost and bark was in the way and people walking down the alley might see the state of the garden. So I did some physical labor for while.

I put together one whole raised bed and filled it with compost. Luckily, the rest of the M-braces hadn't been delivered, so I had an excuse to go sit down after that. Unfortunately, my neighbor came over to deliver the M-braces that evening, but since it was almost dark at that point I felt justified in not going back to work.

Friday morning I woke up and realized that at the pace of one raised bed per day I was going to never finish because my attention span is about three days at most. So Friday I managed to put in two more raised beds.

On Saturday I still had this much left, 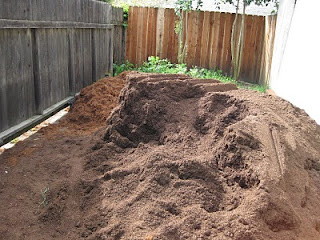 which was a little depressing, but my shoveling muscles were getting stronger. Basically, I kicked ass on Saturday and got down to this: 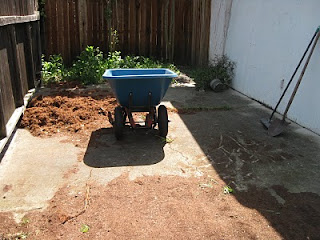 Oh, and the garden, that was coming together as well: 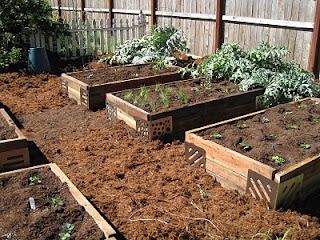 Of course, the camera angle is carefully chosen so that the remaining weeds aren't shown, but you can't have everything. Anyhow, in three months or so I should have the world's most expensive salsa.

But the important thing is that the gate is closed again.
Posted by Theresa B (of Nebulopathy) at 9:25 PM 5 comments: