The Only Middle Grade Fiction I'll Ever Write

A while back I purged a bunch of stuff, including some bags of papers. Later I realized I couldn't find the book I'd written in 7th grade English, and I just assumed it had been in one of those bags and was lost forever.

But then today I was doing a clean in preparation for letting my petsitter into my place, and tada! 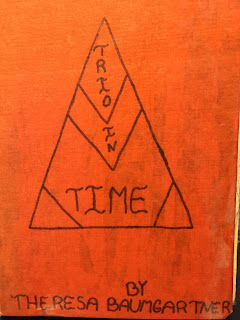 As covers go, it's a bit... terrible, yes, I know, but in my defense this was done in an era before personal computers. And Photoshop hadn't yet been invented. Also, I'm not sure I had a choice about the orange paper. Of course, I'm not sure my efforts today would be much better.

Anyhow, it's 50 pages of hand-typed amazingness. First off, it definitely starts out in media res. In fact, it's so much in the middle of things that I had absolutely no idea what was going on for two pages as I read it. But hey, I managed to get two characters, the setting, and the hook all in the first page. 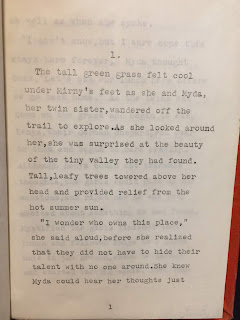 The tall green grass felt cool under Mirny's feet as she and Myda, her twin sister, wandered off the trail to explore. As she looked around her, she was surprised at the beauty of the tiny valley they had found. Tall leafy trees towered above her head and provided relief from the hot summer sun.

"I wonder who owns this place," she said aloud, before she realized that they did not have to hide their talent with no one around. She knew Myda could hear her thoughts just as well as when she spoke.

The telepathic twin girls are chasing their dog and fall through a hole into another time. The last 500 years have not been good ones (due to a nuclear war with the Soviet Union -- yeah, this was written in 1980 - 1981), and they immediately run into another telepathic girl (Vena, the third of the titular trio) who has escaped from a mental hospital because she doesn't think like everyone else.

The whole "hey, we just ended up 500 years in the future" thing is covered entirely in two paragraphs.

In many ways this book is way ahead of its time. It's a post-apocalyptic tale with some kick-ass female protagonists who solve their own problems. There's a dog (their German Shepherd "Kenya").

The only men in the story are evil (so... the most lifelike part of the entire story, ha ha!). I give you this snippet, which is the introduction of the antagonist:


Just looking at him gave Myda chills up and down her spine. His black hair was cut short and he did not have a mustache, but one look at his eyes and they knew he was not as soft as his appearance would have them believe. His eyes were black and he had a piercing gaze that reminded Mirny of an eagle before diving for its prey. After a long moment he finally spoke. "My name is Dr. Myze and I'm your new psychiatrist. Even though my colleagues tell me that you," he stared directly at Vena, "are hopelessly insane, I will still try to cure you of your disease. As for your acquaintances, I have no record of them on our files, but I'm sure they're as crazy as you if they were Beyond, in the forest."

I mean sure, there are a few (hundred) cliches crammed into that paragraph, but there's no question about who the bad guy is.

The girls get captured and sent to a mental hospital where they are found to be resistant to the machine that would change their thoughts. They then communicate telepathically with their dog (who, sadly, wasn't enough of a character to make it into the book title) and bust out, destroying the evil machine and freeing everyone in the process.

There's some excellent world building along the way, like this section, during the escape:

"Isn't there some way to shut him up? Somebody is sure to hear him and then we're in big trouble." Mirny was glancing around nervously as she said this.

"Oh yea, I forgot." Vena gave a short laugh. She depressed another switch and the noise was instantly silenced although they could still see him yelling. "It's possible to soundproof the door, but I forgot all about it until now."

Then they get to the evil laboratory, find the unknown-before-this-point button that makes the machine unfold into a computer, and the twins suddenly remember they took a computer course the summer before and decide to reprogram it.


For the next two hours the twins set out on the monumental task. Many times they stopped to try and figure out something that was new and strange, but they finally finished.

That's probably the most unrealistic part of the whole book because I've been programming for nearly thirty years now and in two hours I would probably still be dinking around trying to figure out why the damn button that doesn't do anything yet is showing up twenty pixels away from where it was supposed to... but whatever. Maybe they've given up on web-based GUIs in the intervening 500 years.

Anyhow, they all run off to "Beyond, in the forest" and the three girls (and the dog that saved their asses!) fall back through the OSHA-approved hole in the ground and end up back in the original time and everyone is happy.

Sure there's the odd plot hole and point of view shift along the way, but I've read worse things that were traditionally published.

If only I'd had access to photo editing software back then... I could have made a book cover like this and this thing could have been a best seller! 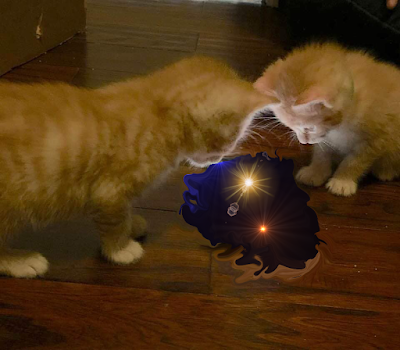