A few years ago I got a portable greenhouse for Christmas. It's been sitting in my garage until now because I don't start very many plants. Also, I live in a pretty temperate zone. I've been considering it as my emergency tent in case there's ever a natural disaster that makes my home unlivable.

But April is Camp NaNoWriMo, so I decided to set it up so I could get the true camping experience without actually leaving my property and its associated modern plumbing and wifi. After I mowed the weeds of the back lawn down to manageable size, 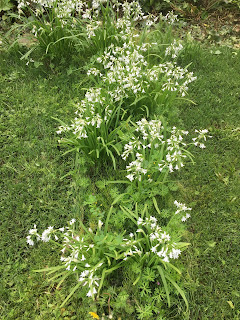 (I kept the flowering weeds because they're pretty.)


I started wrestling with the greenhouse. There's a picture of a smiling woman who's probably in her seventies strolling along with the greenhouse carrying case looped over her shoulder. I'm pretty sure she's only smiling because she's been watching some other poor sap try to put the thing together.

First off the directions are in English, but they've clearly been translated. Infinitives are their friends. "To put the pole in the canvas tab." I kept struggling on a section and only after I'd worked it out would I realize what the instructions were talking about. That's not actually a very helpful order of operations. But I persevered and eventually got it all together. 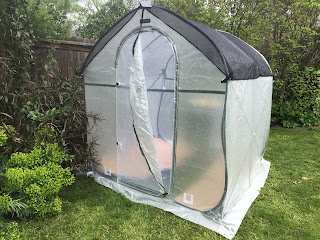 I'll give it one thing -- it holds the heat. I had to find and open the doors before I could figure out the poles because it was too hot to stand in otherwise.

The worst part is that there's no floor. That, in itself, is not a problem. But nature consists of 1 part dirt to 99 parts bugs, so the first thing that happened is that all the bugs in the grass that could fly immediately took off and got stuck inside on the roof of this thing. I could literally close my eyes and listen to the tick tick tick of little insect bodies smacking into the roof.

So I put down a bunch of cardboard to keep the rest of the insects down and then put up a string of solar lights. I'm not sure the solar lights work since I couldn't get them to turn on yesterday afternoon, but it was still light out and I might not have covered the sensor. I'll try again when it's dark. Hopefully all the inside bugs will have died or escaped by then.

And even if it doesn't work as a writing tent I can always use it to burn away a 6x6' section of weeds on my lawn.
Posted by Theresa B (of Nebulopathy) at 6:52 PM No comments: