And this is why we can't have nice things... 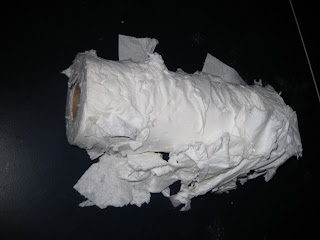 (Also, this is why nothing is ever cleaned up around here.)

Posted by Theresa B (of Nebulopathy) at 9:47 PM No comments:

If I ever decide to get into a life of crime, I'm going to target American Express.

Six months ago I was lying in bed when I got a call from Nordstroms wanting to talk to me about my recent credit card application. That was when I learned that I had a little bit of an identity theft problem. I added a fraud alert to my account with the credit agencies and closed all of the cards that had been opened in my name over the weekend. A week later I checked my credit again and closed the other card that had been opened.

This week I was once again lying in bed when I got a call from American Express. They wanted to talk to me about my credit card. I initially thought that someone was opening up new credit cards in my name again since the 90 day fraud alert had expired, but it turns out that AmEx gave someone a card in my name six months ago and then let them run up $14,000 in charges without making any payments before they started wondering why.

So clearly American Express needs to bump up their fraud prevention efforts.

Also, they need to think about who they hire as customer service representatives. When I called them back to get the card cancelled, first I had to figure out how to get past the automated answering system since I didn't know the card number. I finally reached a person and explained the whole identity theft problem, and after a while she was able to find the account based on my social security number.

Then she asked me for the card PIN.

Blowing Up The Balloon

As it turns out, there's not a lot of support for "The Red Balloon" amongst my friends. No less than four different people independently informed me that they didn't like the film (or the book based on the film) either.

So now my question is, why exactly is that considered a work of art? Is it just because it used color in a way that was somewhat unique (yes, that phrase is just in there to annoy Rvan) at the time? I refuse to believe it is because of the acting or the soundtrack. I will, however, give it points for special effects since I never could find the wires connected to the balloons and I spent some time looking. Perhaps that film was inflicted on me multiple times because it was awarded a special effects Oscar...

Anyhow, I'm thinking that perhaps I should review some other films to see if they're all completely overrated. I might even take a year or so off to work on this pressing issue...
Posted by Theresa B (of Nebulopathy) at 11:00 PM No comments:


Back in the dark ages when I was a lass, when the teachers wanted to have some free time during the day they would lug out the film projector and a couple reels of something innocuous and force us all to watch a movie. I suspect that the films were supposed to be educational, and maybe they were, but mostly I just remember what a pain in the butt those old projectors were and how technically incompetent most of my grade school teachers were. By third grade there was always some student in the classroom whose job it was to push down on that one bar when the film started jittering up and down, and even splice the film back together again with scotch tape if it got so damaged that it broke apart.

One of the films I have vague memories of watching is "The Red Balloon". I haven't seen this film in over 35 years, and all I remember is some little kid chasing around after a balloon. I'm pretty sure I saw it more than once. I'm not sure if I was just bad with metaphors when I was a child, or if this was not really something meant for children, but I do remember thinking that I really didn't get the point of it all. (See, some things never change.)

Anyhow, I noticed that Hulu has "The Red Balloon" in its Criterion Collection which is important because it means that I don't have to pay anything extra to watch it, so I figure I'll watch it (or as much as I can) and see if it makes any more sense to me now.

Here's the synopsis from Hulu:


Albert Lamorisse’s exquisite The Red Balloon remains one of the most beloved children’s films of all time. In this deceptively simple, nearly wordless tale, a young boy discovers a stray balloon, which seems to have a mind of its own, on the streets of Paris. The two become inseparable, yet the world’s harsh realities finally interfere. With its glorious palette and allegorical purity, the Academy Award–winning The Red Balloon has enchanted movie lovers, young and old, for generations.


Here are my actual comments while watching the film:

- 00:37 This is a silent film? I guess I remember there not being any dialog, but for some reason I thought it had a soundtrack. C'mon, this was made in 1956. They had sound then. On the other hand, apparently it's a French film. This doesn't bode well.

- 02:26 So far a boy has walked across the street and spent twenty seconds petting a cat... sorry, a "chat". It's like watching a YouTube video except the lighting isn't as good.

- 03:05 This little kid (in pajamas?) just walked down a flight of stone steps on his own and climbed up a lamp post to get a balloon. Somebody call CPS.

- 05:15 Now the kid is running a marathon through some city, apparently still in his pajamas which may in fact be a school uniform.

- 08:30 I'm not sure what to make of all the people frowning and staring at the boy through windows. Is this some subtle reference to the Nazis?

- 10:00 A second line of dialog. I'm beginning to think this child is the village idiot and that's why no adult seems to mind that he keeps running out into the street without looking for traffic.

- 11:20 Hey, a younger version of my big dog just showed up and tried to bite the balloon. I'm all for it. I'm starting to dislike the balloon, idiot child, and especially this damned soundtrack with its happy little clarinets and flutes.

- 16:12 Now the boy is going to be punished for bringing the balloon to school because the headmaster can't catch the balloon. This plot is not very believable. The soundtrack continues to telegraph everything. The good news is that there is only 18 minutes left. I'm hoping the red balloon dies in the end, but this is a French film, not a German film, so I'm not getting my hopes up.

- 16:54 The balloon just went on a murderous rampage through the city. Just kidding. In reality it's just more shots of a red balloon following people.

- 20:20 Boy and balloon at a flea market -- the only interesting thing about it is that the flea markets today have exactly the same crap they did 55 years ago.

- 20:35 Dear god, there's a love interest: a little girl with a blue balloon. The soundtrack has gone all high and tinkly.

At some point the plot becomes confused with Frankenstein and the boy is chased by a mob of villagers. The boy and balloon are thrown out of a church.

- 25:00 The bullies have stolen the damn balloon and may be about to beat it to death. That actually wouldn't be a bad ending. However, the boy is now yelling at the balloon to do what he wants. And now he has it back.

- 27:30 Is that raw sewage flowing along the sides of the streets? It really looks like it. That's just nasty.

- 29:00 The kid has been running up and down narrow streets to get away from the gang for approximately five hours now, but he just got to a cliff and the villagers are right behind. Will this be the Thelma and Louise ending I've been dreaming about?

- 30:15 Hell, yeah, the balloon just died. With a whole lot of overacting, which I wouldn't have thought possible half an hour ago.

- 31:30 Now all the balloons in the city are getting away. Is this supposed to be some weird Christian metaphor? The red balloon died so the rest of the balloons can be free? No wonder I didn't understand this film as a kid.

- 33:15 Oh wait, the balloons are all offering themselves up to the little kid who is distraught over the demise of his balloon. Well, that makes it all better... because, you know, getting a bunch of new friends totally makes up for the horrific stoning death of an old friend.

- 34:00 Nope, the other balloons are banding together to kidnap the boy, leaving behind the cold deflated carcass of the original balloon.

The kid is last seen clinging to a bunch of balloons high above the city skyline. I'm thinking that at some point the balloons just dump him in the ocean to drown, but that part isn't shown.


Okay, so that's over and done with. I completely understand why this movie made no sense to me as a child. Because it still doesn't make any sense.

Let's face it -- as much as people complain, films really have improved over the years.
Posted by Theresa B (of Nebulopathy) at 10:34 PM No comments: