On the Bus to Camp

So, Tuesday is the kickoff for Camp NaNoWriMo (http://campnanowrimo.org), which is similar to National Novel Writing Month except it's not in November, participants get to choose their word count goals, and it's set up sort of like a summer camp.

I think it's supposed to make people nostalgic for their childhoods or something, but I finally realized that the reason I wasn't really getting into the whole "camp" aspect was because I never actually went to summer camp as a kid. (Please note that I'm not complaining about this. I have enough real things to complain about from my childhood -- notably the presence of two younger siblings when I was explicitly promised that I would always be the baby of the family -- and going to an actual camp with other children and bunks and other children and mosquitos and other children... I didn't miss it.)

Anyhow, I guess I'm supposed to make s'mores and listen to recorded crickets chirping or some such nonsense. I think I'll just stick with my regular writing music. I'm not completely ruling out the s'mores, though.

My outline for this novel is done, although there will be a distinct lack of action in chapter eight if I stick too closely to the plan. This novel is a continuation of the one I wrote in November. My beta reader said she wanted to read the next one so I have motivation to write it.

I did try to get other people in my family to join in April, but was completely unsuccessful at that. Other non-successes of the week: adopting a new dog, convincing other people to sign up for the dog tricks class, doing my taxes. However, I would like to point out that there are two people in my eleven-person cabin who are teenagers and sisters. I mean, if they can do this on top of high school, one might think that people who have time to watch Game of Thrones might be able to carve out a little spare time, but hey, what do I know? I'm not bitter or anything, you bastards.

So maybe I'll send postcards or something.

But only if I start getting care packages...
Posted by Theresa B (of Nebulopathy) at 7:09 PM No comments:

All the Important Things

Apparently the first trick of the dog tricks class will be to find another three people to sign up because it requires four participants to avoid cancellation. I will be sad if Ginger misses her chance to literally jump through hoops.

In the meantime the cats are having the best weekend of their lives because I unearthed a box of old cat toys that nobody ever played with. Turns out that I just needed to let them age for a few years. Also, I recovered an old scratching post with new sisal, so that's been another popular item. Really I recovered it because it just looked terrible, but the fact that they are fighting over who gets to use it is a bonus.

My car got a new timing belt (scheduled maintenance), so I guess that means that I'm not buying a new car any time soon and I should just send in my registration renewal. The best thing about having my car worked on is that they fixed the light that illuminates things on the dash so now I will be able to see how fast I am going when it is dark out and I'm less likely to run out of gas. It's the little things...

And finally, Camp NaNoWriMo kicks off in another week and a half so I am busy plotting. By which I mean that maybe I should figure out what's supposed to happen in this book before I start.

Weeding can wait.
Posted by Theresa B (of Nebulopathy) at 8:31 PM 2 comments:

Apparently we have skipped Spring and just gone straight to Summer this year in Woodland. If I find myself hiding in the shade in March, what will it be like in August? Actually, it will just be hot. After you get to 110 F, does it really matter?

In any case, I am growing a fine crop of dandelions and stinging nettles. (I realize that those are technically both edible, but I'm still viewing them as pests.) 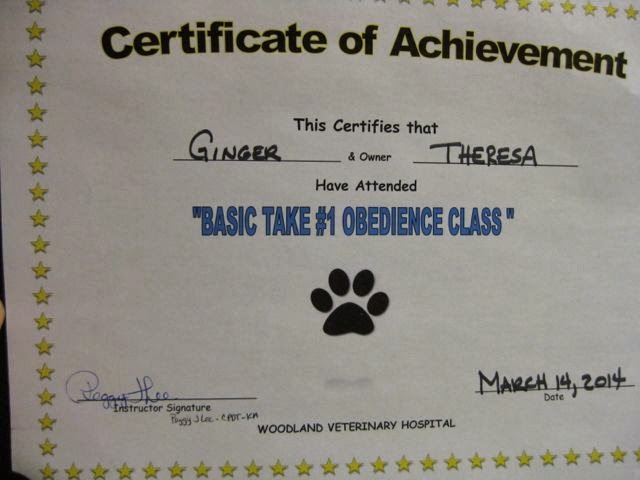 Ginger and I received our certificate for finishing class. Luckily there was not a final exam, or her inability to stay seated while I move more than two feet away might have been an issue. I think we may take the "Tricks" class next just for fun. Jumping through a hoop might be exciting for her.

I'm planning on doing another writing challenge in April (http://campnanowrimo.org) -- so far I haven't been able to convince anyone else to do it with me. It's good that my livelihood does not depend on my persuasive abilities or I would starve.

And finally, some cuteness to see you through the week: 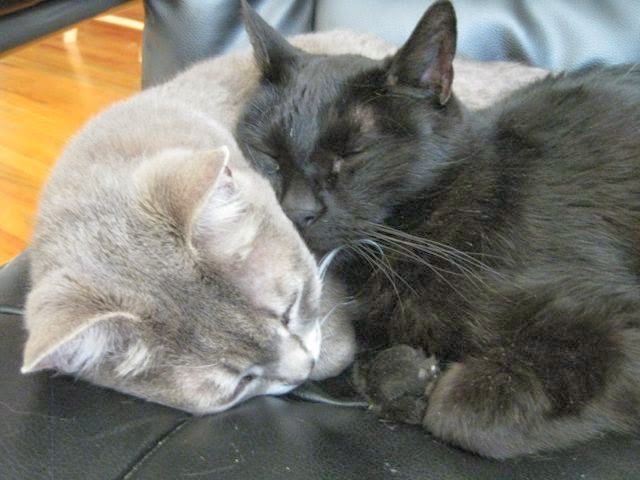 (Ripley and the Kittenhead hanging out together.)

Posted by Theresa B (of Nebulopathy) at 8:32 PM No comments:

How to increase your productivity, in one easy step

After procrastinating for three months, I finally decided it was time to buckle down and edit the November novel.

But first, I had to go buy a table.

Why didn't anyone tell me about this new technology? It turns out you can buy something that allows you to sit comfortably and have papers spread out in front of you. Witchery!

So yeah, that was what I did this weekend.

I also bought a new lawnmower and mowed the lawn, which I'm sure made all of my neighbors (and frankly, most of the people driving down the street) happier.

Ginger and I have one more week of dog training class, which means I have three days to perfect her sit-stay. She's more a fan of the sit-wiggle-forward-and-follow-me-around-while-pretending-to-sit. We're working on it. The only saving grace is that I know she'll still be better than the rest of the class. The bar really is pretty low.
Posted by Theresa B (of Nebulopathy) at 9:13 PM No comments: