The big dog is keeping me busy lately. I came home yesterday from a NaNoWriMo meet and greet and found that somebody had gotten into the trash. There were well-licked plastic wrappers, a few pieces of butternut squash, and a few egg shell sprinkles pretty much all over the living room. (Note: this is entirely my fault. I looked at the unprotected trash can before I left and thought about putting up the barrier and then I forgot about it.)

From my detailed forensic examination, it appears he first settled in on the dog bed with his ill-gotten gains and then moved onto the couch (maybe because the little dog was trying to get her share? maybe just because he likes to hang out on the couch?) The addition of the couch narrows down the culprit; it's not impossible for the little dog to get into the trash, but she refuses to get on the furniture. Anyhow, while on the couch Georgie removed the rest of the items from the bag, although he lost some to the cushion gaps. For a dog who turns up his nose at any hint of a vegetable he sure changes his tune when there are vegetable scraps in the garbage.

It's good that I got the easily-cleaned faux-leather covers for the couch cushions.

In other news, Ripley the cat keeps trying to get the dogs to cuddle with him. I was working from home the other day when I kept hearing grumpy under-the-breath growling from the big dog and I turned around and found this. 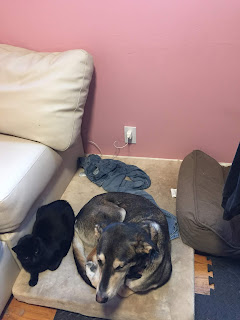 The big dog eventually got up and flounced into the other room.

I have to give Ripley points for trying. He eventually got the old dog, Molly, to hang out with him by waiting until she had entered a state of sleep that closely resembled a coma and then moving in next to her. After a few months of that Molly stopped moving away from him when she woke up, although that might have been because she was so arthritic she had a hard time getting off the floor.
Posted by Theresa B (of Nebulopathy) at 7:02 PM No comments: