Does That Make Me Crazy? Probably...

If there is one thing that we all should learn from Apple, it is that there are lots of people with disposable income that are just like me. And by just like me, I mean crazy cat ladies. Oh sure, not everyone who buys Apple products has cats, but I'm telling you, we're the majority. (Note: data based on a highly scientific survey (of one).)

This is important because there are some money-making opportunities that are going to waste.

Problem: every single one of my t-shirts has a hole in the back on the left side about two inches down from the top of my shoulder. While you could blame shoddy workmanship by the children of Asia, the real problem is Spike. He's convinced that the best way to get off my lap is to go in slow motion over my left shoulder, which means he has to dig is claws in since he doesn't have any momentum.

Solution: a leather shoulder protector that can be worn at home. I'm calling it the "Hole-y Moley". I'm pretty sure they had these during the Middle Ages, but the patent should have expired by now. You could charge a few hundred dollars. Granted, that amount of money would keep me in new t-shirts for a while, but look at all the people who are buying iPads -- at least the Hole-y Moley has a function.

Anyhow, look for the Hole-y Moley soon on etsy.
Posted by Theresa B (of Nebulopathy) at 10:28 PM 2 comments:

This is what the well-dressed dog is wearing in Woodland this year. It's very versatile, and, as everyone knows, gray is the new black. 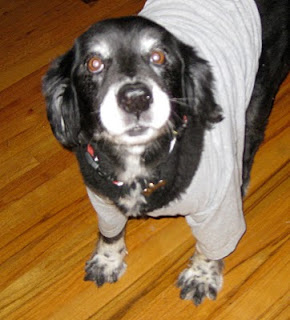 Well, it was either the t-shirt, or the cone of shame since she wouldn't stop licking her incision. And my shins would rather that she have a t-shirt on. 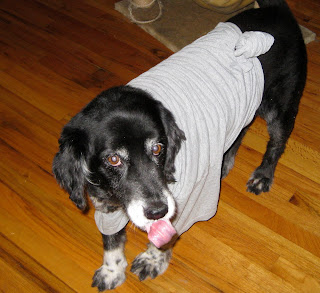 Still, it is a rather fetching look, isn't it?
Posted by Theresa B (of Nebulopathy) at 10:16 PM 2 comments:

Alaska's Really Messing With My Plumbing

As part of my new "Who Cares About The Planet" campaign, I took off the flow restricter on my shower this morning. Woohoo! Water pressure! But before you start leaving nasty comments about what a terrible person I am, consider the fact that all of the rust flakes (or whatever the hell that stuff is) that gets stuck in the aerator does a dandy job of restricting the flow all by itself.

Other than that, I can pretty much guarantee that no home improvement stuff will happen in my house for the next five weeks. You see, Jon is going on vacation to Alaska.

Jon is the guy who sits in the cubicle next to me. He's crazy smart -- as an example, he does kernel programming, and that's not for the faint of heart. He also grew up in Oakland in the Sixties, with parents who were communists. He's the only person I know who went to a Beatles concert -- he won free tickets at the local radio station, so his father dropped him off outside the stadium. He was all of twelve years old at the time.

Anyhow, the relevant thing here is that Jon has owned his house in Oakland for many years, so he's done most of the maintenance and repair work. I, on the other hand, have owned my house in Woodland for eight years, and I've broken a lot of things.

Here is my old approach to home repair: I would open up one of the home repair books, read the section on what I was going to do, then I would get halfway through and give up.

My new approach to home repair is the following: At some point between playing cards and talking about the Jonas Brothers, I explain my latest problem to Jon. He tells me that it's easy to fix and then tells me what to avoid. (There have been a couple of times when he told me something wasn't easy to fix, and I immediately gave up on the plan.) Then, (and this is the key part) he keeps asking me how it went, so I actually have to finish the project.

Anyhow, the point here is that Jon is going on vacation to Alaska for the next five weeks, so I won't be able to do anything.

Nothing better break any time soon...
Posted by Theresa B (of Nebulopathy) at 11:28 PM 2 comments:

Cause I want to take you downtown...

Sadly, I'm not one of those bastards like Jeff who think that working out is a fun part of the day. I've never really found anything that I can do on a regular basis that's enjoyable. Walking is about as close as I've gotten, and even then I'd rather stay home and read.

However, staying home is not really an option in the mornings these days, because the new dog dances around in excitement when she thinks we should be going on a walk. And you can't disappoint a dog that is galloping around the living room and sliding all over the hardwood floors.

So pretty much every day we walk to Main Street and back, which means I get to check out the store fronts.

Jim's Store - I'm still not really sure what the unifying theme is, but now he has dragon statues in a display case near the door. My geeky inner thirteen year old thinks they're cool. (Jim is finally back from the pow-wow in case you were wondering.)

** New **
Cambridge Community College is going in across from Jim's. I can't imagine it will last long, but I'm tempted to enroll just so I'd be able to say I went to Cambridge.

The barber shop (which probably has a name but I don't know what it is) - It's the only place consistently open. I've never actually seen anyone getting a haircut, but there are usually at least a couple of old guys sitting in there talking. Molly tries to run in the open door every morning.

One of these days I may even take pictures...
Posted by Theresa B (of Nebulopathy) at 11:39 PM 11 comments:

Take two chills and call me in the morning

So, almost nine months after I bought the chiller for my aquarium, I finally hooked it up. So far, so good -- I haven't accidentally drained the tank onto the kitchen floor yet.

The good news is that now I don't have to air-condition the entire house in order to keep the tank at 82 degrees.

The bad news is that now I don't have a good excuse to air-condition the house. My backup excuse, the ancient blind dog who really didn't do well in the heat, is also gone. The new dog doesn't seem as bothered by the heat, or maybe I'm just not as tuned in to her needs. The cats don't really care as long as they don't have to move, and the birds don't even slow down in their screaming.

That just leaves me. It turns out that I'm the wimp here. It was 97 degrees F in Woodland today, and I spent most of the day lying down trying to imagine a cooler place. Meanwhile my 65 year old neighbor was out mowing both of our lawns.

I think maybe this saving the planet crap is overrated.
Posted by Theresa B (of Nebulopathy) at 10:48 PM No comments:

In buying furnishings for the home, I've noticed that there really isn't a lot of crossover between the business and home markets.

That's a bit of a bummer, because I would love to have certain things in my house that you only find in public places.

One of those is those plastic holders which contain gigantic rolls of toilet paper. Think about it -- that would be perfect! You'd rarely need to change the roll (which would cut down on all those domestic squabbles caused by someone leaving the empty roll on the dispenser).

It would also solve this problem: 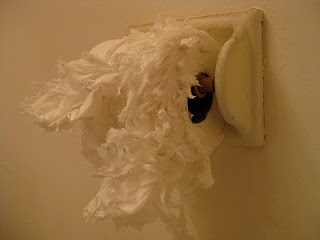 While I'm on the subject of photos, apparently the last picture of my new pre-owned dog was ambiguous (at least according to Eric). I may have to actually find and post a picture of a real pig since he doesn't know what one looks like. But in the meantime, here's Molly at the park. No oinking heard. 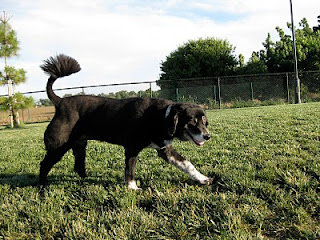 This picture pretty much says it all... 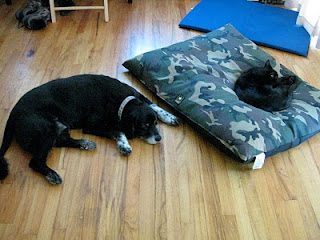 Through the Looking Glass (Literally)

The bathroom is slowly being put back together again.

The paint turned out better than I had any right to expect, given the amount of planning I put into it (i.e., none). I'm quite happy with it. I'm having a problem getting the colors to show up properly in the pictures, but this gives an idea of what the finish looks like. 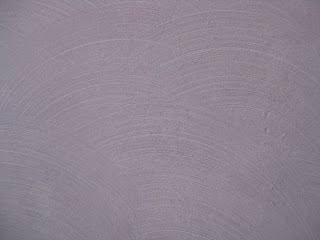 I think the best part of the repainting was taking down the mirror and finding the original wallpaper. Maybe they still make stuff like this, but I haven't seen it... I like the humor in the scenes and just the sheer absurdity. 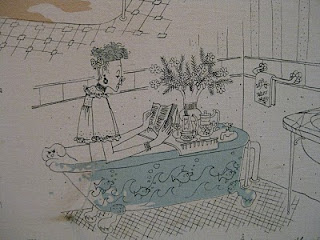 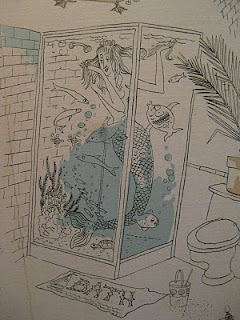 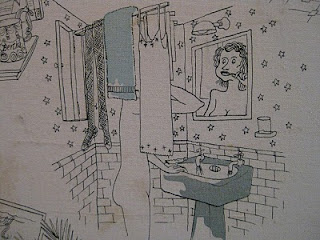 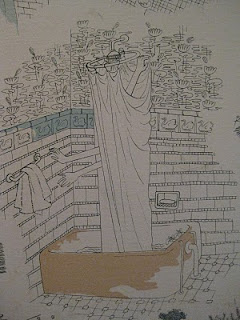 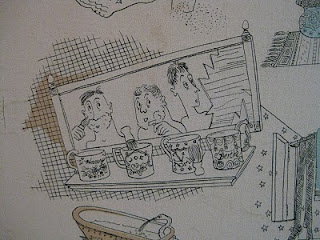 Anyhow, I left the wallpaper up behind the mirror for the next person to find...
Posted by Theresa B (of Nebulopathy) at 12:11 AM 6 comments: