It's been a long day and I'm sick so I'm going to cheat and post something that I wrote as a birthday present for my friend Richard, part of a series of "origin stories". It will be helpful for you to know that Richard has more cats than I do (currently), including a gray cat named Sherman. Sherman is known for getting into trouble. When you go over to their house, someone needs to be on Sherman patrol every time the front door is opened because he likes to dash outside and get chased around the neighborhood until he hides under a car.

It was a dark and stormy night nearly fifty years ago when a meteorite fell to earth, blasting apart trees and mountains in its path. Yet it was not a meteorite at all, but a lost soul, fallen to earth.

No, this was not Richard.

This was the inkling of Sherman.

As the life force grew, the planet around him wept and wailed, for Gaia could see the path of the future should Sherman’s march remain unchecked.

In desperation the planet gathered all the elements of life together, a soup of barley, carrots, celery, a little bit of thyme, salt and pepper to taste… oh wait, wrong soup. No, the planet made a sturdy homunculus from a stout oak branch, clay from the depths of the earth, and pollen to energize it.

(The pollen turned out to be a really bad idea — the future hero’s allergies and asthma were predestined.)

As the spark of Sherman grew, moving ever closer to corporeality, so too did little Richard (no, not _that_ Little Richard, the other… oh never mind), ever gaining wisdom and strength (aside from the allergies and asthma), and when the villainous Sherman finally was made flesh, Richard was able to imprison him while he was still weak from the transition, before he could wreak havoc on mankind.

Even now Richard remains humanity’s only hope (aside from Jennifer), waiting for the inevitable escape of the Sherman the Gray, Beast of Chaos. Always watching. Always prepared.

In other superhero news, what's with this mutant lemon thing? They're both from the same tree. 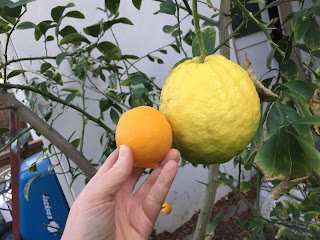 Also, here's the action shot that happened as I was dropping the phone... 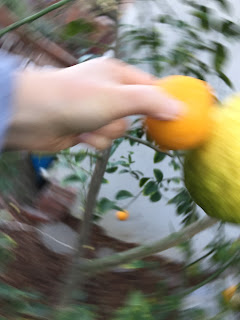 Photography. Still not my strong suit.

It's Holidailies time! Now go read some other blogs!
Posted by Theresa B (of Nebulopathy) at 8:47 PM

Sherman must be SOME cat!

Sherman and our Taffy would get along well - she's trouble incarnate.