The Atlantic published an article that I've seen referenced a few times called "Why Writers Run" that makes some long argument full of famous figures in the literary world that writers tend to be runners because running frees up the conscious mind to craft loving sentences or something like that. The implication, of course, is that writers who don't run are pretty much just talent-less hacks. They probably even write genre fiction.*

I write and I run. I don't do either particularly well, although I'm better at both than everyone who sits on their couch watching television instead of doing either. I have four finished novels and a few more that are in various stages of completeness. I also drag the big dog with me three times a week and think bad thoughts when we come back after four miles and I'm too exhausted to stand while he's busy running after squirrels. 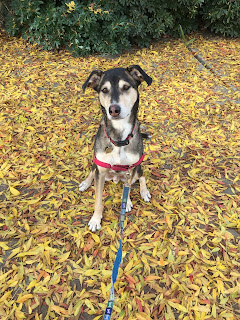 This is after a run. He doesn't look very tired, does he?

I'll certainly never win any races -- my goal is to keep my mile split under thirteen minutes and I don't always hit that goal. (My favorite excuses: I run on gravel, there's a stoplight on the way there, and sometimes I'm running with a bag of dog poop.) According to MapMyRun, I did once have a seven minute mile, but I was also teleporting around the neighborhood at the time, so I have doubts about the accuracy of that measurement. Most people, on hearing of my running times, say "Isn't that about the same amount of time it takes to walk a mile?" To them, I say: No, dammit, why does everyone think that?! It's way faster than walking speed. By at least a minute. Bastards.

I'll probably also never be traditionally published. There are a ton of people out there who are better writers who have better ideas. (Then again, there are a lot of traditionally published books that aren't better written and have worse plots.) I'll still be working on it, next year, but realistically the odds are low. (My favorite excuses: So many to choose from -- editors! publishers! the reading public! the non-reading public!) But I keep plodding on, working on revisions of one while writing the next.

So why do I do either one? Because it's all about me. While I complain quite a bit during the process of both, I like to have run and I like to have written. It's that simple. I don't need "success" in either field for it to have any meaning.

So there you have it. Embrace your inner plodder.

----------------
* That's a joke. I'd read genre fiction over "literary" fiction any day of the week, and I write what I like to read. But I've learned my lesson about being in critique groups with literary fiction people. And poets.
** This is different from being a "plotter" as distinct from a "pantser", both terms being used when describing how much planning goes into a novel before it is written. In those term I'm usually somewhere toward the "plotter" side of the spectrum.

It's Holidailies time! Go read something from other bloggers who are posting daily!
Posted by Theresa B (of Nebulopathy) at 4:01 PM

I have several unfinished novels too - one's actually quite close to being finished, but the others are all very much not.

My NaNoWriMo (2017) novel is about 10-15k away from the end. I just need to force myself to finish it. Then I'll be working on the others. My goal is to finish at least two of them next year before starting anything else.