I went to the craft store today to get a couple of things, including yarn for the project discussed yesterday. I got a lot of yarn, in all kinds of colors. But it's not like it's going to go bad, right?

It wasn't until I headed for the checkout desk that I considered how friendly people in craft stores are. Inevitably I'll buy a bunch of random stuff and when they're ringing it up they'll ask what I'm making. This time I was sort of hoping we wouldn't have that conversation because "knitting hats for my Yeti lawn ornament" makes me sound kind of weird. The good news is that this store is on the other end of town from my house, so I hardly ever run into anyone I know there.  But the really good news was that it was eight at night and the cashiers were too tired to care, so I didn't have to say anything. 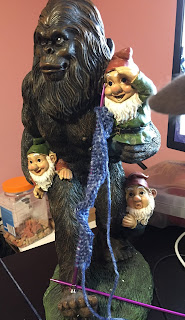 Anyhow, I came home and tried to remember how to cast on. It's been a while. I did finally figure it out, and then I cast on a bunch of stitches and started knitting.

When I say "started knitting" I mean just that. If I need to purl I'm going to have to go watch a video or something because I can't remember how and even when I knew how it was a pain. So I'm just knitting. Since I'm completely winging it, this works out just fine. I figure I'm good for a while although eventually I'm going to have to figure out how to decrease. Also, after going a few rows it turns out I might be making a poncho instead of a hat because I fear that I got a little too excited about casting on. Whatever. I'll figure it out.

Guido finds my knitting an excellent meditation aid. He watched me the entire time. I don't think he wants the yarn as much as he really, really wants the knitting needles. They are now safely locked in a drawer that (I think) he can't open.

So yeah... I spent the evening knitting a hat for my lawn ornament. How about you? 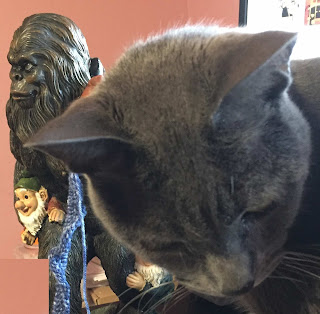 It's Holidailies time! Now go read some other blogs!
Posted by Theresa B (of Nebulopathy) at 10:42 PM

On a related note, yesterday I had to explain to a lady that I was knitting a bag with tentacles on it, because my friend would find it funny and I sent her a penguin with a Cthulhu head on it last year...

Ha ha ha, exactly! It did occur to me that even if we did have that conversation, it almost certainly wouldn't have been the weirdest project she'd heard about.