The Importance of Not Knowing

There have been times in my life where I felt the need to know the answer to any question that came up, partially as a habit formed by being in school for so long, and partially to feel like everything was under control. But sometimes it's good to not know everything. 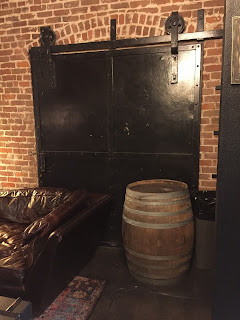 This is my local coffee shop, Morgan's Mill. (They also sell beer, wine, and some food, so I don't know if coffee shop is the right word -- I come here for the hot tea which is loose-leaf and quite good, and also the pizza waffle.) The building used to be a mill, I assume, unless there really is no truth in advertising. They have tables and couches if you really feel like slouching. Of course, this is Woodland, so they also close at 8pm most nights (and 3pm on Sunday). Oh well. You can't have everything.

In any case, there's that door at the end of one of the rooms. I've never seen it open, so there could be anything behind it, possibly even a portal to another universe. I mean, probably it's either a room that holds coffee shop supplies, or a part of the building that hasn't been renovated, which is why I've never asked what's back there. At this point the reality would be a disappointment. 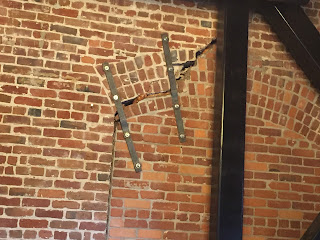 This picture's also from the same room. Jeff was kind enough to point out that the beam in front of the wall is a retrofit and that's probably keeping everything from falling down. Gotta love that repair, though. That's how we roll here.

It's Holidailies time! Now go read some other blogs!
Posted by Theresa B (of Nebulopathy) at 7:43 PM