How To Be Bad At Baking

I woke up a few minutes before my alarm this morning, so I was browsing Facebook and there was an ad from King Arthur Flour for springerle molds. (They also had a recipe for anise drops, another cookie I've never seen referenced elsewhere.)

If you don't know what a springerle is, it's a German anise cookie that has a picture embossed on it. I've never seen the molds advertised anywhere before, but apparently Facebook and King Arthur Flour know me well.

I'm not really good at following directions (yes, this is an understatement) which makes me a pretty terrible baker. Baking requires precision. What I do is more... hand wavey. Sure, that's a good amount of flour. Yeah, I like vanilla, so I'll dump in a bit extra. Well, the yeast might be a little bit old, so I'll just bump up the amount. This is not the way to get consistent results when baking.

(I've also had the occasional complete disaster, like the time I made my first cake from scratch and missed the line for flour, but in my defense I was young at the time.)

I made springerles just once, many years ago. After a huge amount of effort I ended up with thin wafers that you could break a tooth on. That's why my mom has the springerle board now. She can follow directions. She also claims that the weather makes a big difference on how they turn out, but I can't remember if it's supposed to be humid or dry for the best results. Either way, I'm pretty sure I wouldn't end up with the same thing no matter what the weather.

Maybe when (if) I remodel my kitchen I'll make an area suitable for rolling out dough and I'll force myself to follow directions and get better at baking... 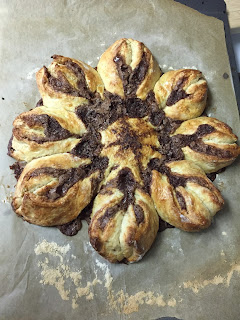 This was the last thing I baked. It tasted fine but looked nothing like it was supposed to.

It's Holidailies time! Now go read some other blogs!
Posted by Theresa B (of Nebulopathy) at 9:22 PM

I'm a decent baker until I try something requiring dough to be rolled out. I've never been able to conquer that. Drop from a spoon? No problem.