Woke up this morning feeling like crap with a bunch of weird dreams that suggested I had a fever, so I stayed home and went back to bed. (It also made me re-evaluate why I wimped out on yesterday's run at the two mile mark -- I thought at the time it was because it was hotter than I'd expected, but now I think maybe I was starting to feel bad because of whatever this is.)

After another ten hours of sleep I felt better, so I spent the afternoon reading the archives on Query Shark, which is a blog where writers send book queries to be critiqued. At some point in the upcoming year I'm going to start sending queries for my first novel to agents. A lot of people recommend getting 100 rejections before retiring the novel and moving on to the next one. Still, there's no point if having the query be the reason for the rejection -- if they hate my novel, that's one thing, but if I can't even get them to look at it, that's a completely different problem.

Anyhow, mostly what I've learned is:
That seems pretty basic, but you'd be surprised how many people can't get even that bit straight. And these are people who are looking for help on their queries -- I can't imagine how many queries go to agents where the author doesn't realize what's important. 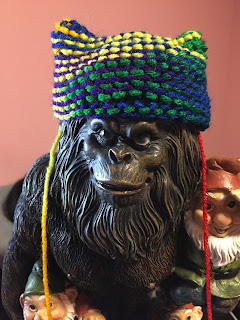 I also listened to a couple of podcasts and knitted yet another Yeti hat. This time I went with a boxy hat instead of a round one. Maybe someday soon I'll even look up how to purl...

It's Holidailies time! Now go read some other blogs!
Posted by Theresa B (of Nebulopathy) at 7:57 PM