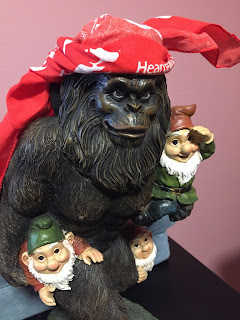 It's holiday season again, and if you're me that means the following:
Holiday movies are a really weird thing. They're all just awful, but awful in a way that must have required some real effort to get balanced. The writing is bad, the acting is bad, the directing is bad, the cinematography...yeah, it's not like I have any idea what that is but I'm sure it's bad -- everything, just everything, is bad. If any one piece were competently done, they wouldn't be as fun to watch.

This year, though, I'm not watching any holiday movies because I cancelled my Netflix subscription last month. It's been a rough year in general, and it seemed like every new show was just one more F*@&$% white man whining about how rough he had it or saving all the helpless women-folk or just generally being the savior because he was the only one qualified merely by being 1) white and 2) male.

(I mentioned it's been a rough year, right? I'm aware there may be some selection bias in my overall view of the television and film industry. But still.) 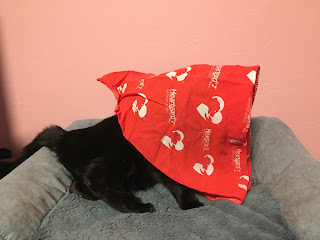 In any case, I cancelled my Netflix subscription so now I have a chunk of time to do something useful.

Or at least now I have a chunk of time...

Jennifer pointed out that my Yeti with gnomes could really use a bunch of little hats, and I feel like my knitting skills might be up to something like that. Granted, it definitely won't be a hat that a person would be willing to wear, but lawn ornaments can just take their damn chances.

I think I'll have to go get some festive yarn tomorrow. 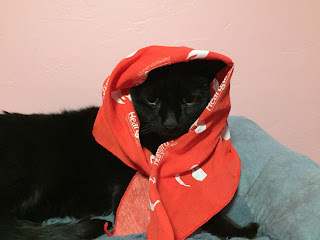 It's Holidailies time! Now go read some other blogs!
Posted by Theresa B (of Nebulopathy) at 8:39 PM

Fortunately my dog sitter knows I"m a slob and has been sitting for us for years, so my cleaning for the dog sitter is less and less frantic. Mostly I just make sure she and her husband have clean sheets.