It's a Nyet-i, Because They Really Don't Exist

Went to a get together today during which we argued about whether one should or shouldn't be forced to watch "Logan's Run", among other things. I still say it's past the point at which it just becomes a sign of masochism.

While I was there Jennifer (who knits amazing things and is an actual professional knitter) made this red and white hat for the Yeti and I realized that the pictures don't quite make the size of the lawn ornament clear. Still, the hat is cute and it fits on the gnome (or it would if his head was free standing). 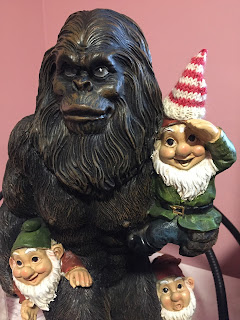 In other news, today was going to be the day. Today I was going to end my procrastination of over a year and actually change out the kitchen faucet which has been slowly disintegrating since I moved in. I stopped being able to swivel the faucet a couple of years ago, and last year a big chunk of metal fell off the stem. It leaks a bit in that spot (not as much as you might think, though) when the water is on, but it doesn't leak when the water is off so I haven't been too worried. 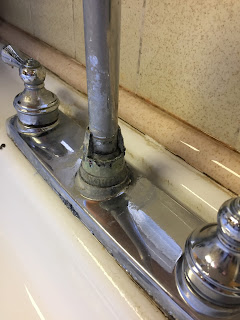 I wasn't kidding when I said it was disintegrating.

Anyhow, I watched some YouTube videos and it looked like something I might be able to do if everything worked out, so I cleared out everything from under the sink, set up the work light, dusted off the box with the new faucet, and... I can't get the valves closed. At all. Either one.

So the valves need to be replaced as part of this. That means the water to the house needs to get shut off. And that's the point I tap out and call a professional. Plumbing projects in a 60 year old house snowball quickly, and I don't want to have to move into a hotel to take a shower because I decided to try to change out the faucet that was still working.

Anyhow, I'll call someone who knows what they are doing and has the tools to make things easier.

It's Holidailies time! Now go read some other blogs!
Posted by Theresa B (of Nebulopathy) at 8:04 PM

You're smart. Plumbing is the never-ending evil that lies in wait until you awaken it with a few tools and good intentions.

Haha, exactly. If I had a basement, plumbing is the monster that would lurk in the darkness.