At work we recently switched over to using the Google suite of tools -- gmail, Google Docs (very similar to MS Word), Google Sheets (a really poor imitation of MS Excel), some presentation software, and a few other things that I haven't been forced to use yet. Initially the rumor was that it was going to save a bunch of money. Then it came out that it didn't save any money, but was going to increase collaboration.

I can kind of see why they wanted to do this. I mean, for years the way most things worked was someone created a spreadsheet with a bunch of information and mailed it out. Different people would make modifications and email that changed version around with a slightly different name. Other people might start making modifications on the original version and send that around, so no one version of the file had all the changes, and pretty soon nobody had any idea what was going on but it probably didn't matter because there was some other problem that was more important now anyhow because the company had reorganized and centralized or decentralized depending on the month. Then a new spreadsheet would be created for the new problem and start the rounds. 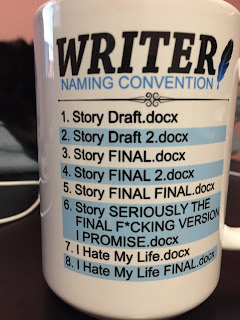 So using a file that everyone could access and make modifications to would seem to solve this issue. (The file updating issue, not the reorganize/centralize/decentralize/hike! thing.) Of course, we lost some functionality along the way... little minor things like the ability to search for numbers in email (really! you can't do this in gmail!) which is completely unimportant unless your entire designation system is based on six digit numbers and you need to see if there have been problems with this particular place in the past. But hey, why would we need to be able to do that?

Anyhow, because my group has been busy working instead of embracing collaborative tools by taking dozens of hours of training, we haven't really become experts on this whole thing yet. But I tried today! I had two data sources with conflicting information, so I created a spreadsheet with the conflicts and put it on Google Drive and sent email to everyone asking them to highlight which column had the correct value.

First off, it turns out that I should have sat through more of the training or something, because even though I sent everyone a "sharable" and "editable" link, nobody could edit the file. So then I sent another email telling everyone to just send me the changes that I needed to make.

Of eight people, three didn't respond. That's not too bad since some might be on vacation or working nights. One person highlighted the correct information. Three people highlighted both columns (with conflicting information). One person just changed some values but didn't indicate what he had changed. All of these people (myself included!) are functional adults with college degrees.

Yeah. It was one of those days.

It's Holidailies time! Now go read some other blogs!
Posted by Theresa B (of Nebulopathy) at 9:21 PM

Where I work, we use Google Docs and a collaborative tool called Basecamp and a homebrewed product that I wrote, all in the name of simplifying our processes.

I feel like I used to try to get more work done, but now I've realized the futility of trying to make large improvements before the focus has to shift again so I make micro-improvements and wait for the next change of leadership. Maybe it's time to switch careers again.

Ugh. I can relate, although with us it's OneDrive and Sharepoint.